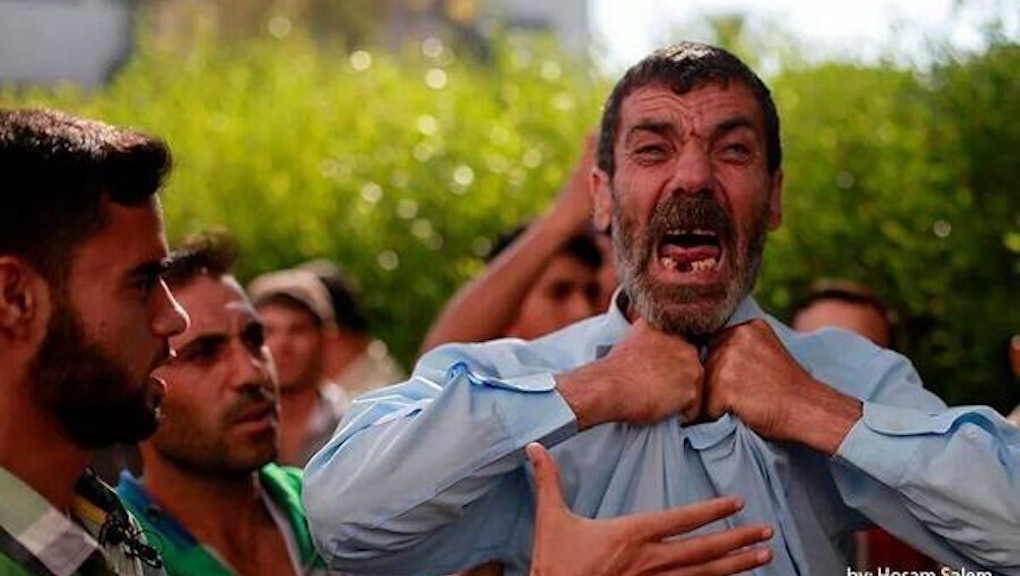 Israel launched an airstrike on Wednesday that killed four Palestinian boys on a beach in Gaza.

Later on Wednesday, Israel "agreed to a UN-proposed six-hour cessation of hostilities for humanitarian reasons," according to Reuters, which noted that "it had not yet been decided when the lull would take place." Reuters also reports that Hamas had no immediate response to the proposal.

These photos are gruesome, but (sadly) not surprising. Social media, like television before it, has brought foreign battlefields into our homes: We can watch bloody conflicts unfold in the streets of Cairo and Kiev, assess the effects of nerve gas in the carnage of Syria's civil war and watch the lives of children slip away from the comfort of our homes. The American Psyschological Association has argued that Americans have become desensitized to violence thanks to the mass media, and violent scenes from overseas wars are no exception.

But there's one photo that does allow us to "look at Gaza while seeing Gaza," to paraphrase Kendzior:

Never mind the hundred of bombs and missiles dropped on Gaza since the conflict flared anew last month. Never mind the hundreds of rockets fired into Israel by Hamas over the past decade. Never mind the failed peace process, and the one that came before it, and the one that came before it. Never mind the carefully worded statements by the UN and White House, the Department of State and the Hague. Or the photos of burned out buildings in Gaza and Israelis huddled in bomb shelters. This conflict has been ripping families apart for years, Israeli and Palestinian alike, and for regular citizens this has nothing to do with Hamas or Netanyahu or settlements or supplies and everything to do with the safety and security of their families.

The excuse was the same one that has been used to justify past attacks on Gaza: Hamas. The aim, we're told, is to destroy the infrastructure from Hamas and to stop the rockets being fired from Gaza toward Israel. But it's not just members of the group living in Gaza, there are civilians living here, who are paying the price for the ongoing violence. That's what international media outlets seem to forget: that it's people simply trying to live their lives that are paying the ultimate price. In this latest escalation, just like any other escalation, every Gazan is a target.

In a conflict as intractable as this one, there are no winners. Every family, Israeli and Palestinian, is a target. The real loss isn't of territory and property, it's of families, of loved ones, of sons and daughters. This man's face is the truth of the war on Gaza: Despite the UN cease-fire, there is only loss here.