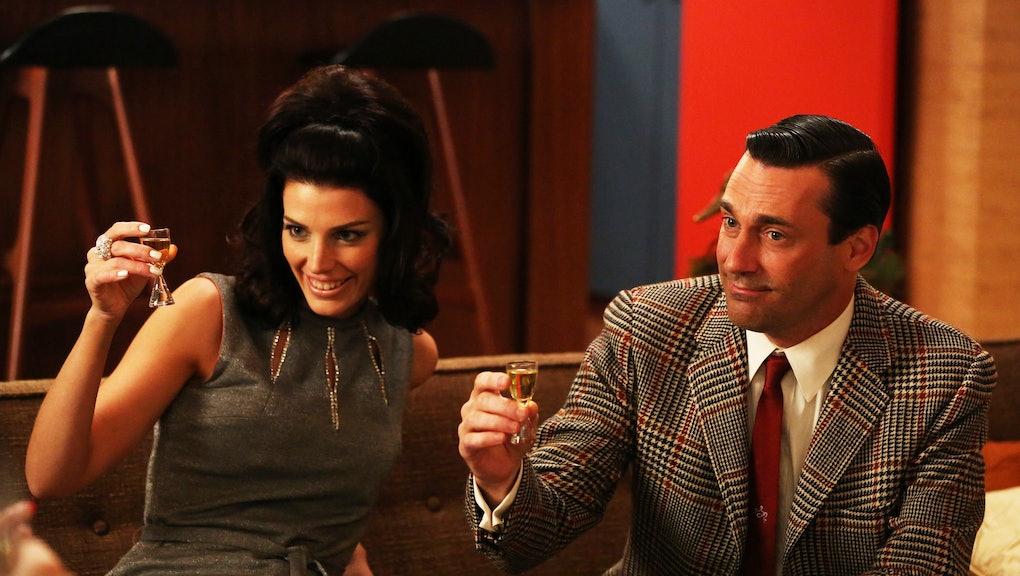 The news: A new study might have found some scientific basis for why Don Draper and other interesting alcoholics are so cool. Titled Drinking to Reach the Top, lead author Dr. Tara Dumas from the Centre for Addiction and Mental Health and her team found that more frequent binge drinkers typically reach higher positions in their social hierarchy.

For some reason, heavy drinkers tend to be more popular.

The study: The researchers recruited 357 young adults between May and July 2012 who were visiting bars in downtown Ontario. Using three different surveys, the team tried to reach a rough idea of how heavy-drinking episodes (how much and how often) related to social status. Higher peer group status appeared to be associated with both the frequency and quantity of alcoholic beverage consumption.

"Our measure of social status in this study is somewhat akin to social power within the friend group, with higher status group members being more popular and having more control over valuable group resources, such as group decisions."

While the results applied to both women and men, it was more pronounced in the latter sex.

This new study might help explain why a previous American Sociological Association study of 1,600 collegians found that students who binge drank were happier on average than their counterparts.

So drink and be merry? Possibly to some extent. But drinking clearly comes with deadly serious risk factors. Underage binge drinking dramatically increases risk of the top three leading causes of death: homicide, suicide and unintentional injury. Doctors are split on whether moderate levels of drinking are fine, but some evidence exists that even light drinking might be bad for you. Hangovers are a relatively minor side effect of drinking compared to potential harms on the cardiovascular system, liver damage and an increased risk of getting various forms of cancer, as well as things you can only get from drinking like alcoholic hepatitis or alcohol-induced cirrhosis. Even if high levels of drinking directly made people feel happier, it's doubtful any doctor would recommend you install a bar in your office like the constantly-faded cast of Mad Men.

However, there's no evidence to suggest causation. Since the young people surveyed were drinking as a social activity, it's possible that the drinking was incidental to the healthier social lives producing the results: People who go out drinking on a regular basis are probably likelier to have higher tolerances, right? But those who drink by themselves habitually might be much less happy.

There are also undoubtedly other societal factors that influence heavy drinkers' rise to the top of the happiness scale — every culture that consumes alcohol has different perceptions and norms surrounding their version of a pint at the local pub.

Either way, the research provides some illumination for the rest of us on why some over achievers might choose to consume lots of alcohol.