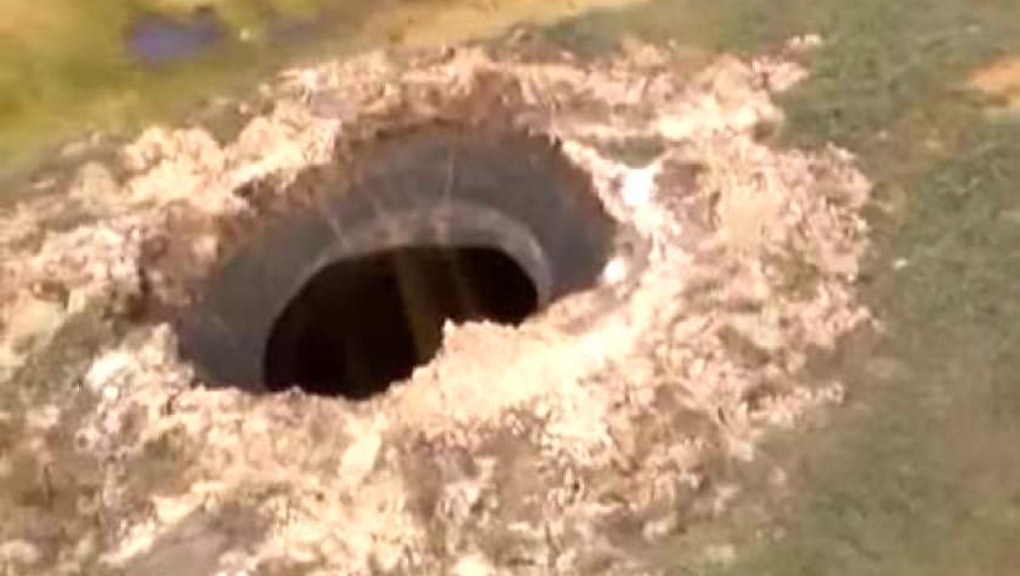 The news: Yes, there are still mysteries in this world — just take a look at this 250-foot wide gigantic pit that suddenly developed in northern Siberia. The likely culprit? Global warming.

The slightly-terrifying maw has emerged in the peninsula of Yamal, whose name roughly translates to "the end of the world" (yes, reality is stranger than fiction). According to the Siberian Times, an oil company's helicopter crew discovered the hole in this gas-rich region. It's located less than 20 miles from Russia's largest gas field, Bovanenkovo, and seems like an entrance to a massive cavern.

Wow. So how did this happen? The Sub-Arctic Scientific Research Centre's Anna Kurchatova speculates that a rapid accumulation of water, salt and gas triggered an enormous underground explosion, which created the maw. Siberian permafrost can be hundreds of meters thick and has generally stayed frozen for the last 11,000 years. But with global warming, deep Siberian permafrost that extends well under the surface has begun to thaw.

Gas locked into the ice might have then mixed with sand beneath the Siberian surface:Since the area used to be a sea, the sand was also loaded with large quantities of salt. The result was a volatile water, gas and salt mixture that accrued pressure until it violently exploded from the ground. Kurchatova compares it to popping the cork on a bottle of champagne.

Polar scientist Dr. Chris Fogwill told the Sydney Morning Herald that the pit could be the remains of a pingo, a block of solid ice that remains frozen for so long that it builds up a hill of soil cover. If the pingo melted, the result would be a big ol' hole in the ground.

A team of Russian scientists reportedly arrived at the site on Wednesday to take samples from the hole and the surrounding soil, hopefully settling the debate surrounding the phenomenon.

Why you should care: Some climate scientists are concerned about melting Siberian permafrost. The release of large amounts of methane trapped in Russian ice could have an unpredictable effect on global temperatures and significantly add to the greenhouse effect. If it melts slowly, it will still contribute to global warming but have a more manageable impact on world temperatures.

Whether or not it's a harbinger of extreme global warming, it's still pretty damn cool.

No word on whether scientists have spotted MLB player Ozzie Smith, who disappeared into a similar hole in Springfield in 1992: