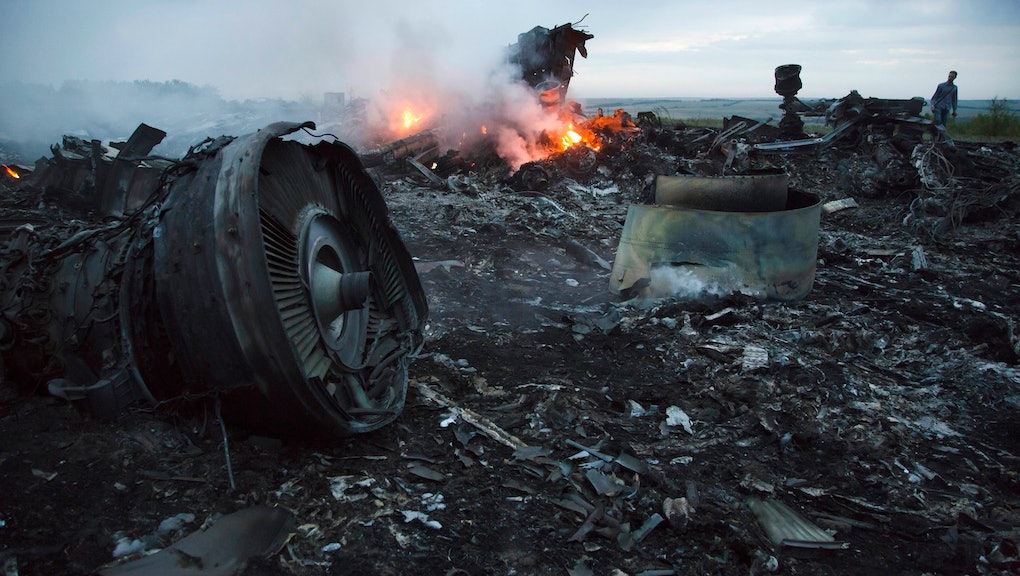 The news: A Malaysian Airlines passenger flight crossing the eastern Ukraine crashed Thursday, killing 296 people. Alarmingly, reports indicate that the flight may have been deliberately shot down.

How are world leaders responding?  In televised remarks, Malaysian Prime Minister Najib Razak says the downed aircraft did not make a distress call, and that if it was shot down, the perpetrators "must be brought to justice."

Ukrainian President Petro Poroshenko said that the Ukrainian military "did not take action against any airborne targets," declaring the crash a "terrorist act."

Ukrainian separatist leader Aleksander Borodai has blamed the downing of the plane on the country's government forces.

President Obama Only had brief remarks, saying, "It looks like it may be a terrible tragedy. Right now we're working to determine whether there were American citizens onboard. That is our first priority and I've directed my national security team to stay in close contact with the Ukrainian government. The US will offer any assistance we can to determine what happened and why. As a country our thoughts and prayers are with all the families of the passengers, wherever they call home."

If the plane and the hundreds of civilians on board were indeed murdered intentionally or accidentally, there's probably next to no question that the massacre is somehow linked to ongoing tensions over Russia's annexation of the Crimean peninsula and an ongoing separatist insurgency in eastern Ukraine. No exaggeration: This could be a "game changer" that will radically redefine both international perceptions of the conflict and the way it will play out on the ground.

Thursday's developments will likely cause a chain reaction in international relations, involving Ukraine, Russia, the U.S., Europe and Asia.

Who shot down the plane? Quite simply, we don't know.

Initially, it seems most likely that the culprits were the insurgents, who have "made a habit" of targeting Ukrainian military aircraft flying over territories they assert to control. A video posted on YouTube today supposedly shows smoke rising from the crash after the plane hit the ground; Foreign Policy claims the translated dialogue overhead among the villagers indicates they are pro-separatist and celebrating the crash. Furthermore, a rebel Twitter account quickly took down a post bragging that they had shot down a Ukrainian military "An-26," a craft that initially looks like it could be mistaken for a passenger jet.

Whether or not they have the capability to actually bring down a passenger airliner remains an open question. The separatists claim that they lack the capability to shoot down a plane flying above 10,000 meters, but Ukrainian officials say they have evidence an SA-11 missile system was used to shoot down the aircraft. An Associated Press reporter says that he had personally seen a SA-11 system in the hands of insurgents. The SA-11 has a distinct profile and would be difficult to confuse with other types of military equipment such as a multiple launch rocket system.

What's more, First Deputy Prime Minister Andriy Purgin of the Donetsk Peoples' Republic (the insurgents' de facto breakaway government) announced his intent to seize the black box and deliver it to Moscow. The rebels appear to have accomplished the first step of this plan. There's nothing definitively suspicious in this, but could also indicate that the rebels very much want Russia to provide the investigators and not Ukraine.

However, the possibility remains that either the Ukrainian or Russian military could have (almost certainly unintentionally) shot down the plane. Ukraine claims that Russia has shot down one of its Sukhoi-25 jets on Wednesday amidst a major buildup of troops on the eastern border and that another missile had been fired at a Suk-25 the same day. It also says Russia shot down another military transport.

Former Moscow Times journalist and The Nation reporter Alec Luhn says that it remains possible the Ukrainian military had set a no-fly zone and shot down the aircraft after it passed into restricted airspace.

Foreign Policy notes that militaries do occasionally shoot down civilian aircraft by mistake (here or here), but both sides have professional militaries with good intelligence support. Neither Ukraine or Russia could have any plausible motives for shooting down the craft, meaning that any takedown would likely have been the result of a disastrous mistake.

Simply put, the most likely culprits were the rebels.

What happens now? A web of governments are now involved in this crisis.

At least 154 people on the flight were Dutch citizens. There were also 27 Australians on board, 23 Malaysians, including all 15 crew, and 11 Indonesians.

Six passengers from the United Kingdom, four from Germany, four Belgians, three from the Philippines and one Canadian. There are still 47 dead whose nationalities haven't yet been confirmed — the plane was reportedly carrying 23 Americans on board, who were listed on the manifest.

Depending on who launched the missile, President Obama will no longer be able to pretend that the current international approach is working. If Russia or pro-Russian forces are at fault, the result will be even worse Western-Russia relations, heavier sanctions, and greater calls for U.S. or European forces to intervene in the eastern Ukraine — especially to defeat the rebels. It also means that Putin may be forced to back down from the tense standoff over the disputed region and perhaps cease giving support to the insurgents. If it was Ukrainian forces, then the result will probably reinvigorated attempts to resolve the border crisis diplomatically.

Either way, this is a big deal, and it will have major ramifications on how the crisis is resolved.