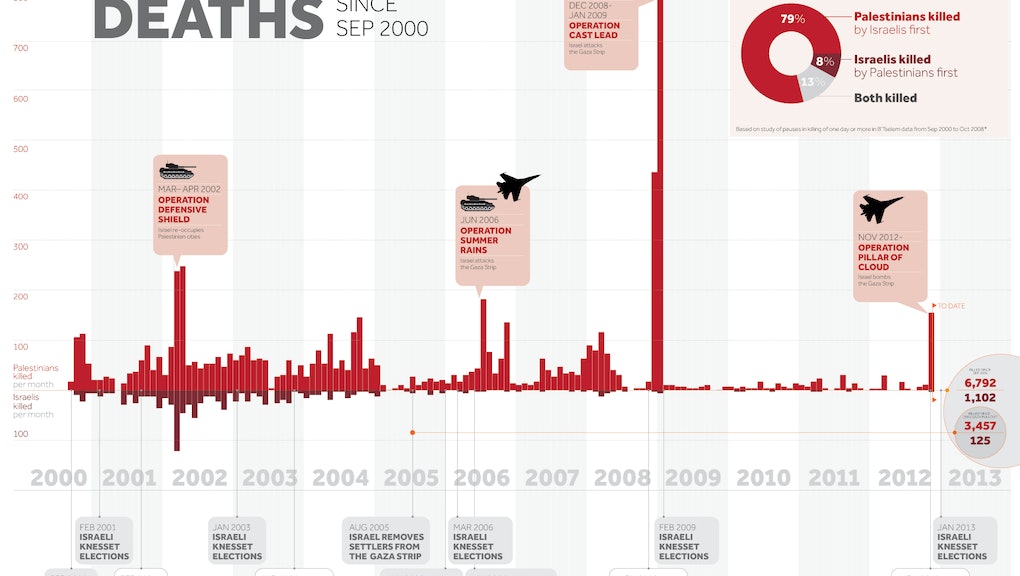 One Chart Puts the Entire Israeli-Palestinian Conflict in Perspective

The news: As Israeli military forces make their way into the Gaza Strip in a major new ground invasion, this infographic from Visualizing Palestine has some perspective on the relative costs each side has paid in this entrenched conflict.

According to their data, 79% of deaths in the Israeli-Palestinian conflict from 2000-2008 have been from Israeli military or police actions against residents of the Gaza Strip and the West Bank. Just 8% of total deaths during that time period were from Palestinian attacks on Israel. The infographic doesn't necessarily assign blame to one side or the other, but notes that who was killed by who "first" was determined by whichever side attacked after a day of peace.

Why the huge gap? Israel unilaterally pulled out of the Gaza Strip in 2005, removing all security forces and civilians. Israeli citizens in the area who refused to vacate were actually removed by unarmed soldiers. Since then, Hamas began emphasizing the political process and strengthened its support among Palestinians, eventually taking control of the entire Gaza Strip from the Palestinian Authority in a violent coup in 2007. So for a time, they were quite busy focusing on the situation within their own territory. The resulting 2008 Gaza War between Hamas and Israel saw nearly 200 Israeli citizens injured and a few killed, during which Israeli counterattacks drew far greater blood from the Palestinian side.

It's not that Hamas hates Israel any less now that it's in a position of power. Instead, they've had more domestic problems to deal with as they solidified their position in Gaza and fewer opportunities to attack Israel thanks to better security. Hamas' use of suicide bombings fell dramatically since the Second Intifada in 2005, and the organization began abandoning suicide attacks in 2006. The last such attack in Israel happened in April 2008, when three bombers in Kerem Shalom killed themselves and injured 13 others. Hamas apparently decided the tactic was costly and ineffective. Further factors preventing further bombings also included the construction of security walls and checkpoints which made it harder for extremists to slip into Israeli cities and settlements.

Launching rockets against Israeli cities became the preferred tactic. But from 2011 onwards, Israel's Iron Dome defense system has ensured that many Palestinian rockets fired towards Israel (which were already pretty poorly designed) have simply been shot down or disabled. Despite being more powerful, Hamas now lacks the ability to launch suicide campaigns. Overwhelming Israeli military and intelligence superiority has thwarted even some recent attempts by militants to sneak over the border.

The Israeli capacity to strike back, on the other hand, has only grown. Israeli reprisals against Hamas have grown both bigger in scale and more aggressive since the organization seized power in Gaza. The U.S. has also funneled huge amounts of money into the Israeli military, by some accounts providing 23-25% of its funding. There's just simply no comparison between the two sides' military strength and indeed their capacity for inflicting pain on the other anymore.

Why you should care: As Vox's Max Fisher notes, Israeli military and defense superiority and its increased control over Palestinian territory may have actually helped prevent an agreement. The economic blockade in place since 2007 has sent many Palestinians into poverty, helping Hamas find steady recruits despite a disastrous lack of success in its campaign against Israel. (Paradoxically, extremist groups thrive in terrible socioeconomic conditions even when they're partially responsible for them.) The expansion of illegal Israeli settlements in the West Bank furthermore indicates to many Palestinians that agreements can't be trusted.

Meanwhile, the Israeli public's support for a solution that would grant Palestinian independence, once massive, has plummeted. Fisher says that suicide bombings during the Second Intifada convinced many Israelis that peace with Palestinians was impossible, and this "sense of apathy" has been further encouraged by the other side's subsequent inability to fight back. Since Israel has incontestably won the physical battle, when shots go off Palestinians are far more likely to be in the line of fire. That's just the frank reality of the situation.