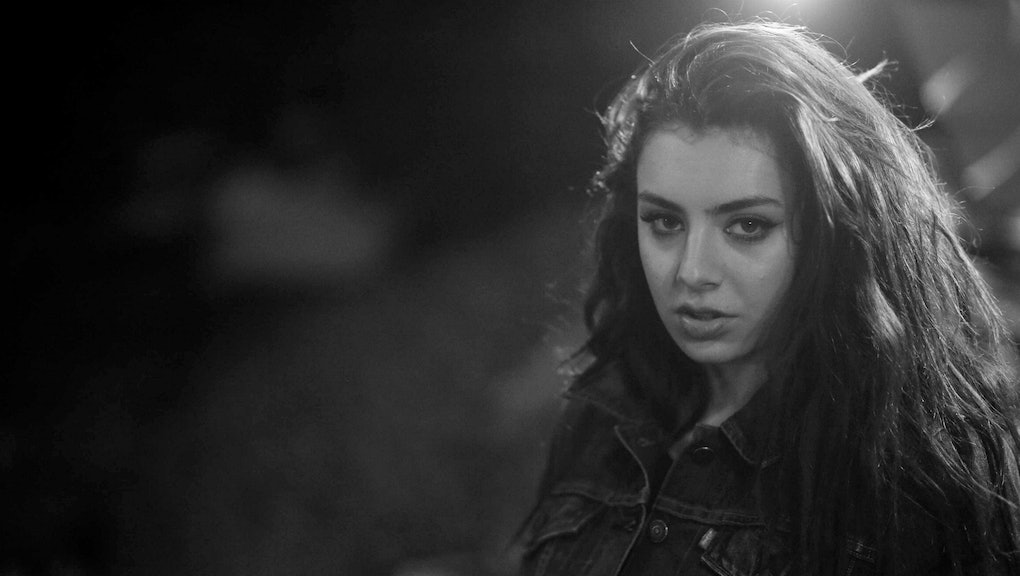 This is the sort of thing normally reserved for people like the King of Pop, but suddenly an artist that few people have heard perform solo act is pop royalty. XCX's infamous feature on Iggy Azalea's "Fancy" launched "Handy" and put her on the pop culture radar, but it's not the first time she's dominated the pop world from the side of the stage.

Back in 2012, when Charli XCX wrote "I Love It," she gave it away. The dance-y song went to Swedish duo Icona Pop soon after the 22-year-old British songwriter quickly scribbled its lyrics over a couple of beats sent to her by Patrik Berger, a Swedish producer who is also responsible for Robyn's "Dancing On My Own" and Lana Del Rey's "Off to the Races." Though XCX shouts along on its iconic, fist-pumping chorus, she was sure she didn't want her voice featured in the song's spotlight, even when it did reach the mainstream. Then, the song went to No. 1 in the U.K. and rode the Billboard charts for 29 weeks. "It was really surreal to have a U.K. No. 1, especially when no one really knows who you are," she said in a 2013 interview with BBC. A year later, that's all about to change.

Now, XCX is slowly creeping into the spotlight on her own. Her recent single "Boom Clap" is the lead track for The Fault in Our Stars soundtrack album, and it peaked this week on Billboard at No. 16 (though "Fancy" continues to reign supreme). In last week's VMA announcements, she was nominated as an Artist to Watch for that video and has also been nominated for Video of the Year, Best Female, Best Pop and Best Art Direction for "Fancy."

MTV called her an "underdog," but in her mind she's anything but — and rightfully so. Her debut album didn't perform on nearly the level of her featured songs, but she knows she can make a hit whenever she pleases. This single represents more than just a hit for the young songwriter, whose real name is Charlotte Emma Aitchison. It's helped her realize that she's confident enough to hold her own. "I can write a fucking hit song," she mentioned when discussing her upcoming album, which is expected to drop in October. "And I'm going to write some for me now. I feel like as an artist I've done so many collaborations now that I think I just want to take this record for myself."

This won't be the first endeavor Aitchison has taken alone, but she is finally coming into her own. Her major label debut in 2013, True Romance, showcases a depth that her brief features on radio hits haven't. She comes across like an uncompromising dark, electro-house princess who occasionally bears similarities to an "early Madonna." Sonically, the album offers a totally different landscape. "You – Ha Ha Ha," for example, hinges on a Gold Panda sample, but XCX reshapes it with her youthful and pop-y lyrics. It's a good example of the "Tumblr-ready" remix aesthetic that she's cited as an influence and a major help to her fame in the digital sphere.

That's part of what makes her such a uniquely well-suited pop star to the new pop climate. When she was 14, she started putting out songs on Myspace with quirky titles like "Art Bitch" and "I Wanna Be Darth Vader." Soon, she was performing at underground raves in London. And just two years after putting those songs up online, she had signed her first record deal with This Is Music/IAMSOUND Records. So it makes sense that she still wants to create slightly misshapen pop tracks like "Nuclear Seasons," with its effortless blending of '80s synths and Gwen Stefani-esque vocals.

Ultimately, then, today's Charli XCX is very similar to 2006's Charli XCX with one key difference: She still holds tight to her quirks and eccentricities, but now the world is watching. Those watching her most closely think she might be a new Madonna — and like the star, she may not ever evolve into the stereotypical pop-star, even in light of the recent success of "Boom Clap." "Madonna was someone who didn't get put in a box," she told the New York Times. "The second someone tries to put me in a box, I will do everything to rebel against that."