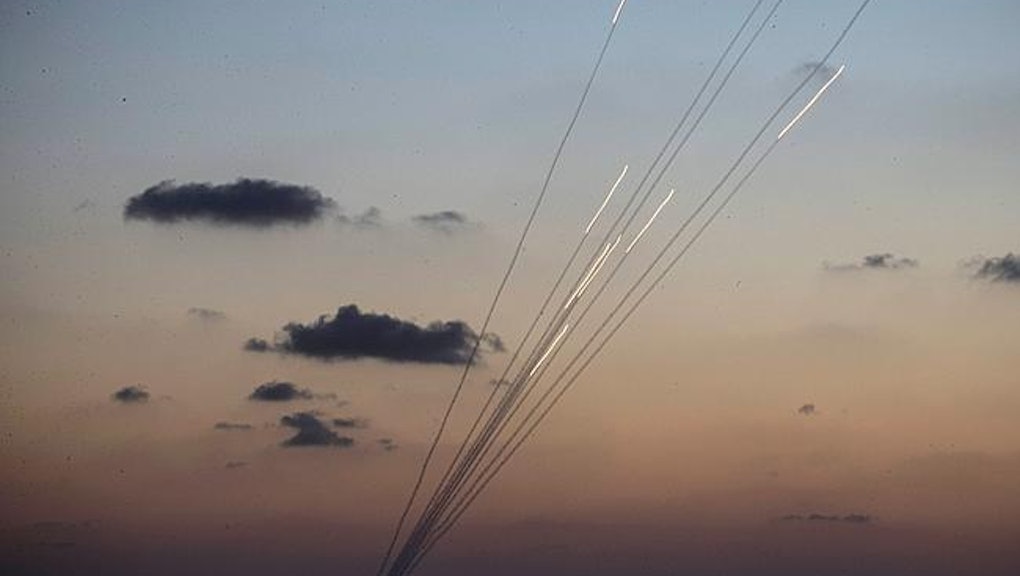 Watch a Crowd of Israelis Cheer As Missiles Head For Gaza

Most people watching the violence happening right now in Israel and Palestine can only shake their heads.

A few people, however, are reacting like they're watching an NFL game. CNN reporter Diana Magnay was covering the Israeli assault from a vantage point overlooking the Gaza Strip. In the background, Israelis could be heard cheering and clapping as IDF munitions hit Palestinian territory and unleashed their lethal payload.

Magnay was then apparently threatened by some of the people present, posting on Twitter that they were "scum." It's since been deleted, but can be seen below.

You'd probably have to be a real piece of work to find joy in a bombing campaign unfortunately directed at one of the most densely populated urban areas in the world. In Gaza, it would be nearly impossible for even a surgically conducted bombing campaign to avoid killing civilians. Even Washington officials aren't so sure Israel is doing its best to do that. Two-hundred thirty-five Palestinians have been killed by the ongoing Israeli campaign, including four young boys on a beach. In the past few days, many civilians have died - and all but one of the fatalities has been Palestinian.

Regardless of your stance on the ongoing conflict, the idea that it's a big, fun spectacle when so many Palestinians are dying could only be considered grotesque and offensive. Unfortunately, this isn't an isolated incident. Posts about "Sderot cinema" have recently shown Israeli citizens apparently viewing the bombings like it was a July 4th fireworks show.

To put this in stark reality, the New York Times provides some context for the above photo:

The image of the Israeli spectators was taken after 9 p.m. local time on Wednesday, [reporter Allan Sorensen] said, about the same time that what was intended to be a "precision strike" from Israel's military killed at least eight of their Palestinian neighbors, seated in similar plastic chairs at a beachside cafe in Gaza, waiting to watch the World Cup semifinal between Argentina and the Netherlands.

This has happened before. In 2009 during Operation Cast Lead, in which around 1,400 Palestinians died, news reports captured similar scenes of Israelis cheering on the assault.

Sorensen says that growing right-wing extremism among Israelis is partially responsible for the "vitriolic" response he later received for posting the above photo, calling "extreme incitement to violence from very right-wing Israeli groups unprecedented" in the ongoing crisis. Some far-right Jewish groups have even thrown rallies calling for the extermination of Palestinians.

Al-Jazeera America's Melissa Etehad writes that even some social media posts by Israeli leaders appear to be inciting right-wing extremists in the nation. Prime Minister Benjamin Netanyahu called for "vengeance" after the murder of three Israeli students triggered the current crisis. Another declared the "entire Palestinian people as the enemy," receiving over 5,000 likes. Meanwhile, so-called "price tag" attacks carried out by radical Israelis living in illegal settlements in retribution for perceived or actual Palestinian affronts have been a growing problem.

Ultimately these terrible displays of inhumanity are originating from a small but vocal minority of Israelis. And without a doubt some Palestinians cheer on horrible atrocities as well — in fact, the escalating war will probably only boost Hamas' popularity as it inspires a reactionary backlash against Israel. But pretty much everyone should know better than to cheerlead the bombings, including those with luxury of being able to leisurely view the violence from afar.