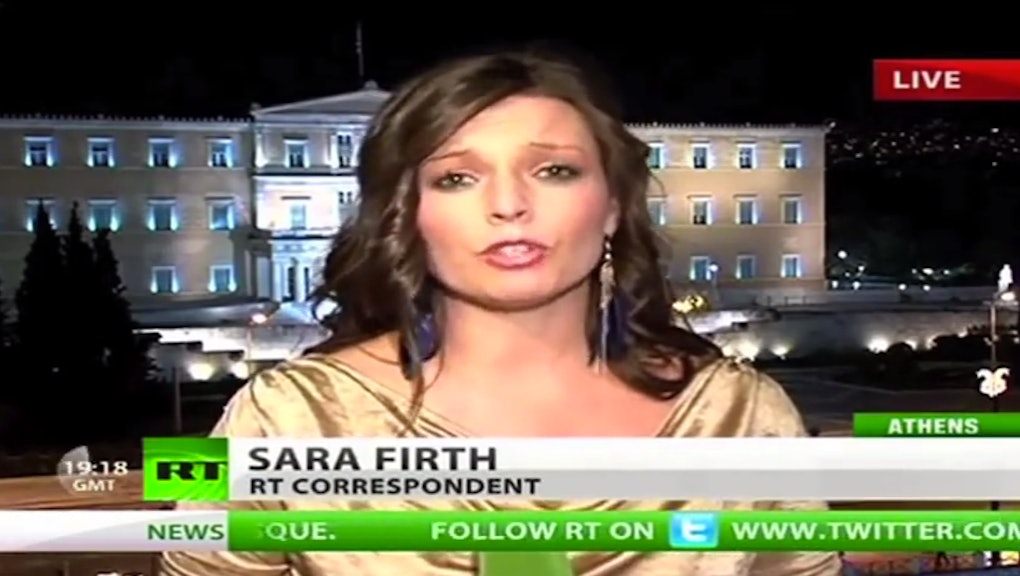 Those were the parting words of Sara Firth, who quit her job as an anchor at Russia Today over the outlet’s coverage of the Malaysia Airlines flight that was shot down over Ukraine.

Firth had worked for the Russian government-funded station for five years, but told the Press Gazette that enough was enough. “Yesterday when the story broke you get the kick in your stomach when you’re going to get the facts and it’s this huge story,” she said. “And I walked into the newsroom and they were running an eye-witness account of God-knows who the person was blaming the Ukrainian government, and it is such a volatile situation.”

The announcement: Before talking to the press, Firth took to Twitter.

Russia’s party line, which has been reported by RT, is that Ukraine is likely responsible for the crash. U.S. and Ukrainian officials, on the other hand, have said that Russia likely supplied separatists with the kind of missile necessary to down the plane.

According to the Washington Post, RT fired back at Firth in a statement from their communications chief, Anna Belkina:

Sara has declared that she chooses the truth; apparently we have different definitions of truth. We believe that truth is what our reporters see on the ground, with their own eyes, and not what’s printed in the morning London newspaper. In our coverage, RT, unlike the rest of the media, did not draw conclusions before the official investigation has even begun. We show all sides of the story, even if everyone else has already decided which side is to blame.

Not the first: RT anchor Liz Wahl, who had been based in Washington, resigned in protest back in March. She did it with even more of a bang, quitting on air.

“Personally I cannot be part of a network funded by the Russian government that whitewashes the actions of Putin," Wahl said. "I'm proud to be an American and believe in disseminating the truth and that is why after this newscast I'm resigning."

BuzzFeed’s Rosie Gray wrote an investigation of RT after Wahl’s resignation, with a focus on how young American reporters are offered well-paid positions at the outlet, only to find immense pressure to adhere to a pro-Russian slant.

“A lot of us ex-RTers joke that we have PTSD from working there,” one former reporter told BuzzFeed. “It was my first job and I feel embarrassed and ashamed. This bright-eyed, idealistic college grad found out how dirty the world of journalism can be.”