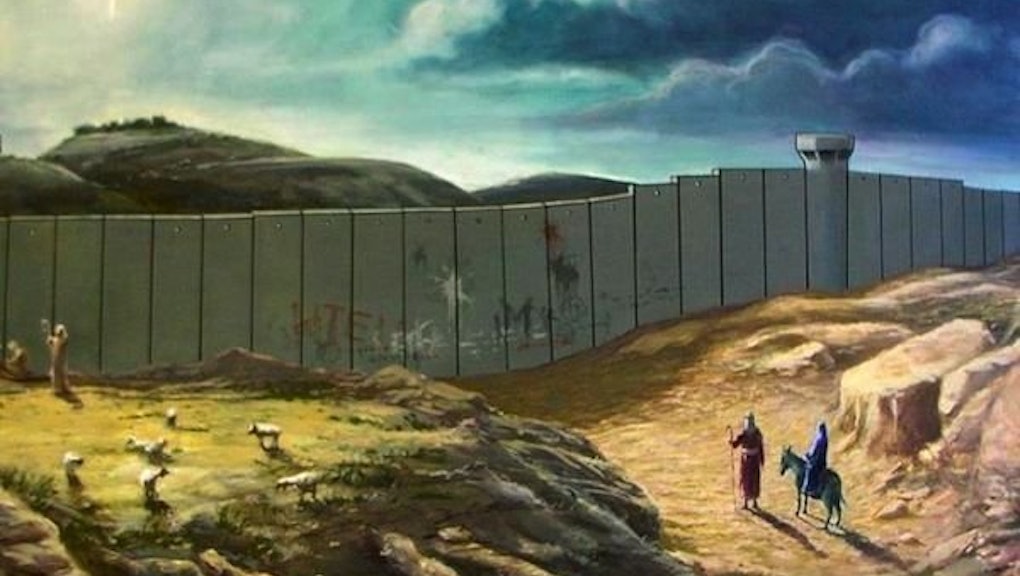 The world's eyes are on Israel and Palestine, as the current crisis in Gaza has now led to the deaths of more than 600 Palestinians and 30 Israelis.

While the latest round of violence has made headlines, it is not an isolated incident. On the contrary, today's fighting is yet another page in a years-long, bitter conflict. Israel's creation in 1948 sparked one of history's largest refugee crisis, wars, terror attacks and a harsh military occupation.

To fully understand what's happening today, you need to appreciate the long history of the conflict. Here are 12 political cartoons that capture the full history of the Israeli-Palestinian conflict:

1. War on the horizon

In many ways, Israel's creation in 1948 was an affair of desperation and panic.

In this cartoon, we see the British washing their hands of Palestine, shortly before the formal establishment of the state of Israel, sparking a war between neighboring Arab countries and the newly formed state.

The British controlled the region from 1920, until handing it over to the United Nations in 1947. The British left the country at a time when tensions between Jews and Arabs were rising. They only continued to mount as more Jews fled Europe, in need of safety after the Holocaust.

In 1947, the United Nations proposed a partition plan, dividing the region between Jews and Arabs. The Jewish Agency accepted it, but Palestinians and Arab League members rejected it.

The departure of British troops unleashed a struggle for territory, leading to the violent expulsion of 750,000 Palestinians from their ancestral homes, an act that some consider to be ethnic cleansing.

2. The creation of the state of Israel

Created in 1956 by the Israeli cartoonist and Holocaust survivor Kariel Gardosh, the character Srulik embodies much of the spirit of the years following the creation of the state of Israel.

Srulik is depicted wearing a tembel hat, khaki shorts and sandals, and is an ardent Zionist who farms the land and, at times, puts on a military uniform to defend Israel.

His chipper persona and hardworking ethic not only defied many of the damaging Jewish stereotypes that permeated cartoons at the time, it encapsulated the hope and possibility that Israel represented to the Jewish people after centuries of oppression and Holocaust.

But there's another side to the Israeli victory, as Handala, who might be seen as the Palestinian counterpart to Srulik, shows.

Palestinians refer to the events of 1948 as the Nakba, or catastrophe, when they were expelled from the land that was once their home. Prevented from being able to return to what is now Israel, those refugees are still scattered across the West Bank and Gaza, refugee camps in Arab states, or internationally.

Many remained — and their descendants still remain — stateless, with few rights and a longing to return to Palestine. Drawn by Palestinian artist Naji al-Ali, who was a child when he and his family fled to Lebanon, Handala is always depicted with his face hidden and with ragged clothes.

The cartoon character was 10 years old when he left Palestine and will remain the same age until he and his family return to their homes. Only then would life resume for the boy.

The Six Day War in 1967 was an enormous military achievement for Israel and a disaster for the Arab world. In a stunning sweep to victory, Israel seized control of the Sinai and the Gaza Strip from Egypt, the West Bank from Jordan and the Golan heights from Syria.

As this cartoon of Egyptian leader Gamal Abdel Nasser shows, the defeat was intensely humiliating for the Arab world; for Palestinians in the West Bank and Gaza, it meant the beginning of decades of military occupation.

Intifada is an Arabic word that means to "shake off," and the term now refers to two periods where Palestinians attempted to end Israeli control through both peaceful and violent means.

The first largely unarmed uprising erupted relatively spontaneously in 1987, in response to Israeli repression in both the West Bank and the Gaza Strip.

A year later, following his declaration of an independent Palestinian state in November 1988, Yasser Arafat announced that he accepted the state of Israel and rejected terrorism — a game changer in the future of relations.

The outbreak, however, was violent: According to Israeli human rights organization B'Tselem, 1,409 Palestinians and 271 Israelis were killed.

Israeli and Palestinian leadership finally came to the negotiating table after the first Intifada, in 1993.

At the time, both sides viewed the Oslo Accords with both hope and pessimism. The talks were a chance for a peace, but one negotiated on a foundation of profound distrust and hurt.

In this 1994 cartoon, Steve Bell alludes to a central Palestinian objection that talks, between a heavily militarized state and a occupied people, couldn't be fair with such a fundamental power imbalance.

The Oslo agreements set a timeline for negotiating key issues. However, 20 years later, we're still not any closer to a two-state solution.

Sparked by Ariel Sharon’s infamous visit to the sacred mosque in Jerusalem, the Al Aqsa Intifada left deep scars on both the Israeli and Palestinian collective psyche.

Palestinian violence claimed the lives of 950 Israelis by 2005. The uprising involved a campaign of suicide bombings that targeted buses, restaurants and nightclubs. The accompanying Israeli crackdown killed 3,223 Palestinians in the same period.

As the cartoon shows, the specter of violence hung darkly over the lives of Israelis and that the trauma of terrorism still remains today.

Once Israel announced its disengagement from Gaza in 2004, violence decreased. Eventually, all Israeli settlements were evacuated and dismantled in the Gaza Strip.

8. The Construction of the Wall

Standing eight meters tall at its highest points, the Wall has become a potent symbol of the Israeli occupation.

From an Israeli perspective, the barrier is all about security: It was built as a measure to protect citizens from suicide bombings and attacks emanating from the Palestinian territories in the Second Intifada.

After the barrier was built, the number of bombings declined — but the cost for Palestinians was steep. The wall split neighborhoods in two, tore through the land of Palestinians villages and trapped Palestinians in the West Bank. What's more, most of it is built on Palestinian land — leading the International Court of Justice to deem it illegal under international law.

With the encouragement of American authorities, the residents of Gaza and the West Bank voted in elections in 2006.

They did not go as planned: Hamas swept to victory. Some view the group as a terrorist organization, avowedly committed to the destruction of Israel.

What followed was a bitter conflict between Hamas —  condemned by the European Union and the U.S. despite being democratically elected — and the more moderate Fatah. The former now controls the Gaza Strip, and the latter is now dominant in the Palestinian Authority, which runs areas of the West Bank.

The rift still hasn't been healed — and Gaza, and the Hamas government with it, has remained under a tough blockade.

This brutal image, from the Guardian's Martin Rowson, takes on both the cruelty of war and media treatment of the dead.

According to B'Tselem, 1,387 Palestinians were killed when Israel invaded the Gaza Strip during Operation Cast Lead, which began in December 2008 and lasted into the start of 2009.

Much like today's crisis, Israel justified the operation based on rockets fired from Gaza. It is estimated that some 773 of the dead were not involved in hostilities. Comparatively few Israelis died in the violence: Three civilians were killed by rockets, six members of the security forces died and four were killed by Israeli fire.

Air raid signals are now an everyday part of life for many residents of Israel, thanks to the recent escalation in Gaza. Some are using humor to cope with the pressure.

Tomi Zandstein created the cartoon in 2012 as a light-hearted take on the experience of rocket attacks in Tel Aviv. The cosmopolitan, coastal city is less impacted by missiles than areas of southern Israel, which borders Gaza. That means that residents of Tel Aviv are more sheltered, making humor a great way to ease fears of bombardment.

12. The cycle of violence continues

Tragically, it looks like an end to the bloodshed and oppression is nowhere in sight.

Horrifying escalations like the invasion now unfolding in Gaza, erupt with frightening regularity. A 6-year-old in Gaza today has now lived through three wars.

It doesn't look like a solution will come any time soon: Negotiations toward a two state solution are on life support, at best.

Commentators criticized this cartoon, published in the Independent, for using anti-Semitic tropes and misrepresenting the conflict.

But it captures the sense of despair that many Palestinians feel, especially as the brutal and unbalanced battle kills more and more civilians.

As long as that cycle of violence and oppression continues, the suffering will only continue.