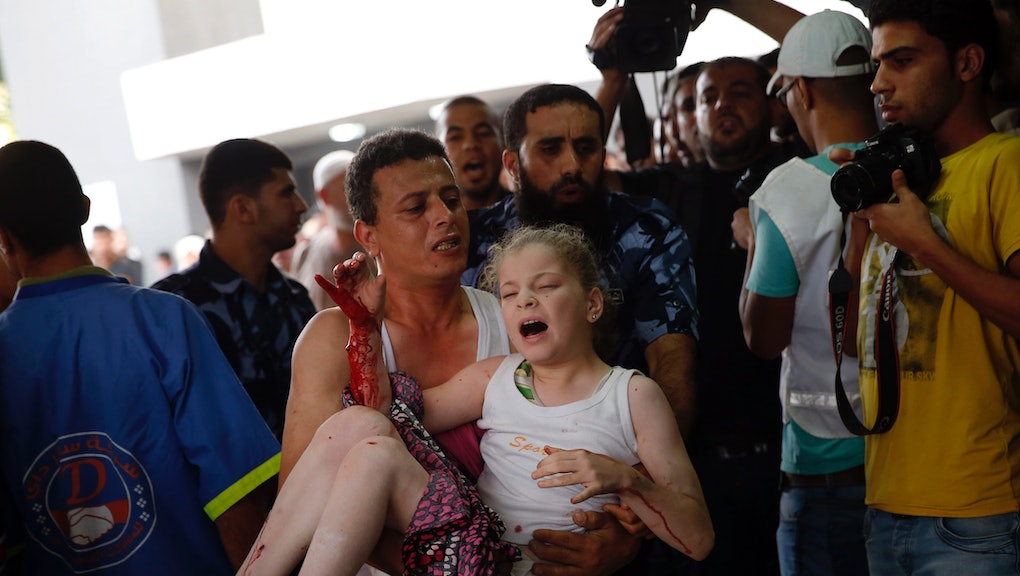 Why Israel's Invasion of Gaza Doesn't Represent Israelis Like Me

When I first sat down to write this, news had just come in about 20 more men, women and children killed in Gaza by the Israeli army. On Monday, I woke up with news that a bomb wiped out 28 members of a single family, an attack carried out by my country's army, whether I like it or not.

These are friends of mine, those who are currently invading Gaza as part of their reserve service, my neighbors who are bombing it from the air and my government who is commanding it from the Defense Ministry's offices in my city.

At the same time, sirens are wailing over my head, forcing me to break from writing and step outside. There is no bomb shelter where I live and they say it's better to be outside than inside. I wait for the Iron Dome missiles to swoosh over my head and intercept incoming rockets from Gaza, hear the bang, then go back in and try to focus again, only to find out that 13 soldiers have just been killed and pray they are not my friends.

I have to take a stand on the fighting taking place right now — and I take a stand against it. Because there can be no justification for firing on unarmed civilians, because so many lives are at stake and because there is an alternative just waiting for us to choose it.

I live in Tel Aviv, which is located about an hour away from Gaza by car, or a minute and a half away by rocket or F16. As a journalist covering the occupation for the past eight years, I've been to the West Bank hundreds of times, but I've still never been to Gaza. And neither have the vast majority of Israelis my age (30) or younger.

Although this may sound irrelevant to the question of my resistance to the attack on Gaza, it is actually crucial for understanding the context for the current military campaign, which is gaining high levels of support from the Israeli (Jewish) public.

Until the early '90s, Israel allowed for free passage between the occupied territories and Israel proper. Relations were always unequal, with Palestinians subject to military rule and regulations, but there was at least a possibility of meeting. Israelis often toured the territories for vacation and cheap shopping and Palestinians came to work in Israel or visit their families' lost homes if they were refugees.

This ended gradually since the Oslo years and the parallel wave of suicide attacks on Israeli cities, and even more so with the Second Intifada, the construction of the separation wall in the West Bank and the 2005 "disengagement" from Gaza.

The result has been the extreme segregation of communities. While Israel still rules the entire land (Gaza included), the people never meet each other. Young people on both sides have lived with this segregation their entire adult lives.

For many Israelis, Gaza can only be conceived as "the place where they shoot at us from," and Palestinians in Gaza are just "human shields" or people determined to attack Israel. Likewise, for people in Gaza, Israelis are only seen as the people implementing the siege and sending drones and F16s into Gaza.

This dehumanization of both sides is at the heart of the current conflict. Israelis insist upon seeing it as a fight against terrorism, ignoring the hundreds of civilians being killed by our army, while for Palestinians this is a fight for independence and the rockets fired on Israeli civilians are considered legitimate to that end.

In nearly two weeks, Israeli forces have killed some 500 Palestinians, among them more than 100 children. Twenty Israelis have been killed. But, this is not a contest of "who gets to suffer more." Personal suffering can never be narrowed down to a statistic.

Image Credit: AP. Palestinian medics in Gaza City carry a casualty, as a building burns in the background, July 20.

The current escalation won't actually achieve anything except push forward a depressing cycle of violence. Just like in 2003, and 2006, and 2009, and 2012, this round of violence will fail. The idea that if we only strike them hard enough, we'll "teach them a lesson" will fail yet again. It always does and we already know this. Israel's refusal to recognize the legitimate Palestinian national unity government led to the new violent confrontation, and only its willingness to recognize this government and work with it towards peace will end it.

That is why I've made it my goal to break the segregation, by corresponding with Gazans, translating their writings into Hebrew and bringing their voices to the Israeli public. It's an attempt by few to challenge the many and to undo the segregation and de-humanization promoted by our leadership in the past two decades. And we have to start by ending the war.