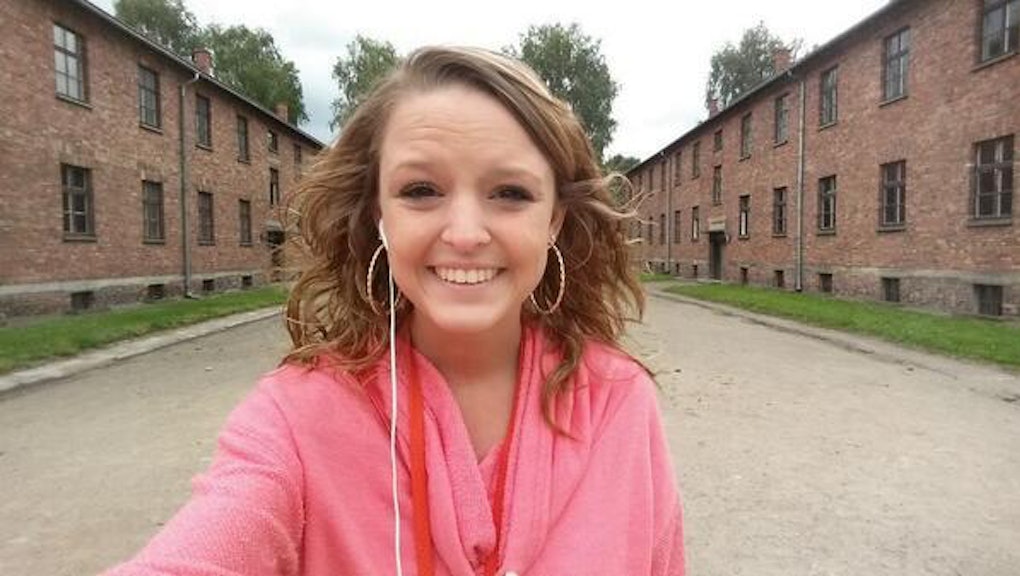 This Teen's Selfie Went Viral for the Worst Possible Reason

The news: If you needed more evidence that you should think carefully about what you put online, a girl named Breanna Mitchell has incited the Internet by tweeting a "smiling selfie" of herself at the remains of the Auschwitz concentration camp in Poland.

Posted in June, it only came to the Internet's attention this month, when angry Twitter users reacted en masse to the perceived desecration of a memorial to human brutality.

Breanna, or @PrincessBMM, says she understands the reaction to the original selfie, but says that she studied the history of the camp for years with her father, who died before he could visit.

"That trip actually meant something to me and I was happy about it," she responded in one post. In another, she angrily fired back at users who said her photo was inappropriate. Later, she posted that she regretted the entire incident.

The background: This actually isn't a new thing. The New Yorker's Ruth Margalit wrote last month about a perceived trend of selfies at Auschwitz and other Nazi sites, which generate "a perception of today's youth as a bunch of technology-obsessed, self-indulgent narcissists." A Facebook page With My Besties at Auschwitz, designed to shame the people posting such pictures, temporarily flared up, inspiring a series of posts on major news and opinion websites. It similarly received mass condemnation from Facebook users who thought the creator was making light of Auschwitz itself.

It's not just about selfies: Sociologist Nathan Jurgenson wrote last year about the popular "I Forgot My Phone" video, which portrayed people as hapless, servile thralls to their cell phones. Like much of the backlash over the Auschwitz selfie, it suggests that gadgets and phones are ruining the special or sacred moments in human life.

What all of these various postings have in common is a reactionary anger over how social media and nice phones are turning us all into Facebook status-obsessed zombies. Or, as Jurgenson put it, such things make the angry people responding or sharing "sure of themselves as a very extra special person" who haven't been lost to Zuckerberg's plan to turn us all into phone drones. (Yet they have no qualms about sharing it on Facebook.)

Selfies at Auschwitz may be pretty awful and disrespectful, and are a surefire way to step into a social media minefield. But lots of people act like jerks at Auschwitz that aren't getting the same attention — such as Europe's neo-Nazis. A little perspective would be nice.