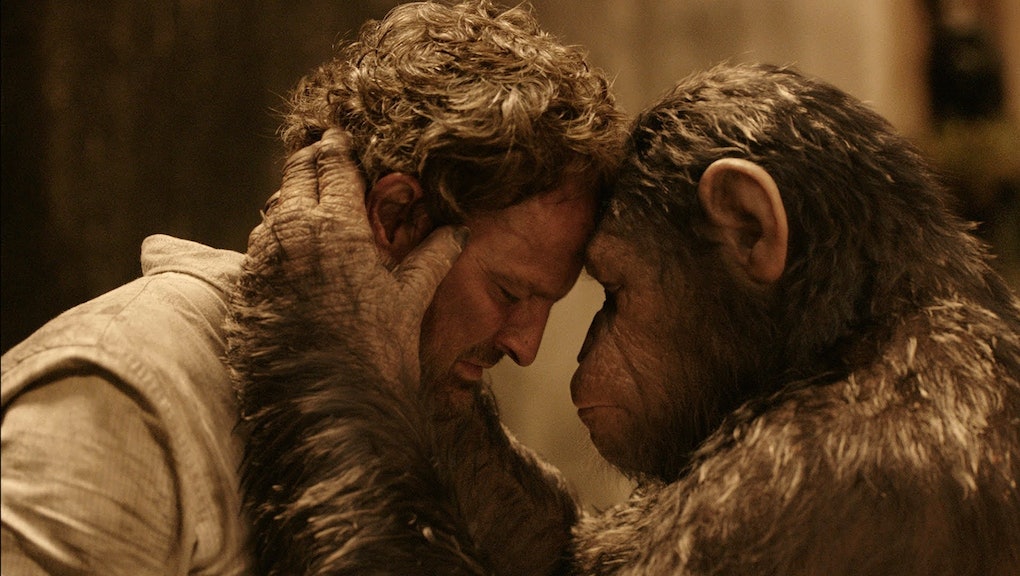 "No animals were harmed in the making of this film." For years, that sentence, found in the end credits of most Hollywood films, has relieved the concerns of moviegoers sensitive to the treatment of animals onscreen. But that well-worn statement may be growing obsolete.

Advances in CGI (computer generated imagery) and motion-capture technology, like those seen in this summer's Dawn of the Planet of the Apes, are making the use of live animals in entertainment mostly unnecessary. Greater scrutiny from organizations like the American Humane Association (AHA), which supplies most of the oversight of the use of animals in film and which coined the "no animals were harmed" slogan, are leading to stronger enforcement policies. Someday soon, that notice may read that no animals were used, let alone harmed.

Dawn of the Planet of the Apes embodies all of these changes to animal protection in entertainment. The film is, of course, a sequel to 2011's Rise of the Planet of the Apes, a massive worldwide hit that was championed by animal protection organizations such as the Humane Society of the United States and PETA for its pro-animal ideology and practices. Rise of the Planet of the Apes' story about abused apes who rise up to overcome their human oppressors reflected the increasing opposition towards the use of animals in medical and research experimentation, while the performance by Andy Serkis as the chimpanzee Caesar seemed to point to a brighter future in which replacing the use of animals in film would not only be possible but also give filmmakers a broader storytelling palate. Other filmmakers have already built on Rise's success; Darren Aronfosky utilized the same methods in this year's Noah, and cited both his personal views on the issue and the advances in technology as motivation.

Although it also features no live chimpanzees, Dawn paints a less rosy picture of animals than its predecessor. Still, it provides a good snapshot of where efforts to end the use of animals in entertainment currently stand. Chimpanzees are practically off-limits. Last year, the U.S. Fish and Wildlife Services (USFWS) resolved a discrepancy in their classification system and created new protections for captive chimpanzees that would severely limit their use in entertainment and experimentation. Even if the federal government does not ban their use completely (the USFWS rule has still not been finalized), groups like PETA continue to make life very difficult for those companies that employ apes in this way.

But while we are approaching something resembling a consensus on the use of apes, opposition to other animals' use in entertainment has not yet reached critical mass. Despite the film's compassion for primates, Dawn of the Planet of the Apes still used live horses to serve as transportation for their motion-capture apes. They even ride them into the film's climactic battle sequence, where many of the horses are shot or killed from explosive blasts.

Further, few questions have been asked about the animals on-set treatment. The use of horses, while certainly controversial, is still accepted as standard industry practice and is clearly not a box office deterrent. HBO canceled the horse-racing series Luck after several horses died on set and animal rights groups howled in outrage, but Peter Jackson's The Hobbit was a worldwide smash despite bad publicity over the deaths of 27 animals, including several horses, on an off-site holding facility.

Although most people would approve of the use of horses in film as long as they are well cared for, Luck and The Hobbit exposed the ways that on-set monitoring of animals is never a sure thing. The AHA's famous "no animals were harmed" motto only applies to incidents and injuries that occur while the cameras are rolling. They do not apply to the training process, which often involves pain as a deterrent, especially for exotic animals like chimpanzees.

Of course, the AHA is actually employed by the studios, which might explain why they sometimes feel obliged to look the other way when animals are injured or made to suffer during production. It is not in their purview to stop a production or even protect an animal from abuse. In the case of an animal being injured or even dying on set, all they can do is offer an alternate wording of their famous endorsement: "American Humane Association officials were present during the making of this film." If you care about animals and you see that phrase, run.

But changes in enforcement are coming. Last summer, the Hollywood Reporter published a lengthy expose on the AHA, detailing the travails of Barbara Casey, a long-time AHA inspector who has now formed her own rival watchdog group, Movie Animals Protected. According to Casey, the new organization will go further than the AHA by monitoring animal housing and transportation. They will also offer more nuanced descriptions of the animals' on-set experience, eschewing the "blanket disclaimer[s]" that AHA relies on.

Of course, if our values and our technology keep progressing as they have been, there may no longer be a need to use animals in entertainment at all. Dawn of the Planet of the Apes points the way forward in more ways than one. It highlights how you can tell a complex, crowd-pleasing story without the use of live animals, while reinforcing the notion that those animals — its apes, at least — have lives that are as valued as those of the humans. One critic noted, "[T]he apes are among the more intellectually complex characters you're likely to spend time with this summer," which is as much an indication of our evolving relationship towards animals as it is an indictment of formulaic Hollywood filmmaking. While not all of the animals in Dawn of the Planet of the Apes are so richly drawn, they will be soon.