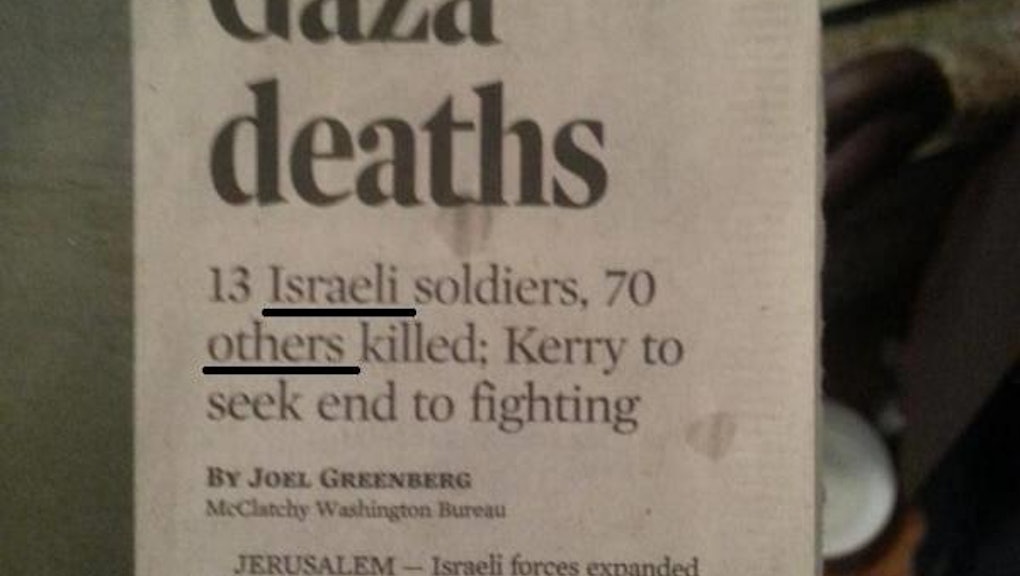 The news: Cairo-based photojournalist Mosa'ab Elshamy caught this headline from the Monday edition of the Baltimore Sun that seems to capture Palestinian sympathizers' frustration with mainstream media coverage of the ongoing conflict in Gaza. While Israeli combat fatalities are given up-front attention, Palestinian fatalities are brushed off as "others."

It's not the only time in the past few days that Israeli deaths have been emphasized while sidelining the current conflict's Palestinian death toll. A similar post slammed the Washington Post's coverage.

What you need to know: The 70 "others" in question who died Monday (at the latest count, over 100) were all Palestinians. In total, more than 570 Palestinians, most of whom were civilians, have died. In contrast, 25 IDF soldiers and two Israeli civilians have died.

The United Nations believes that approximately 70% of the Palestinians dead were noncombatants, which would bring Gaza's civilian death toll to somewhere around 390 people. CNN reports that this Israeli invasion seems larger and more focused in densely populated areas than previous ones, potentially putting more regular people into the line of fire.

Israel claims that Hamas bears the responsibility for these deaths for rejecting Egypt's ceasefire proposal and keeping munitions, fighters and tunnels in densely populated civilian areas. Hamas may also be culpable for asking Gazans to ignore IDF warnings of imminent threats.

But one must question the degree to which Israel can target densely populated areas without racking up high numbers of casualties. Others have pointed out that there's little place for many Palestinian civilians to go, since some 85,000 of them have already been displaced in one of the most crowded urban areas in the world.

Vox's Max Fisher argued, however,that, "It is entirely within Israel's power to not bomb civilian buildings," which might have avoided many of the deaths. Accusations that at least some Israeli fire has been indiscriminate were given some support by a video purporting to show a wounded man being killed by a sniper.

Why you should care: There's no easy answer for whom is to blame for disproportionate Palestinian civilian deaths and Hamas clearly has little regard for the safety of their countrymen. But many Americans are largely hearing one side of the story from the mainstream media, which laments the inevitable tragedy of Palestinian noncombat deaths as a given (if it acknowledges them at all). Of course, the Israeli operation in Gaza was neither a given nor inevitable, but a deliberate policy decision following the senseless murder of three Israeli teens in the West Bank.

Two rather lame rejoinders from the Right include claims that if we care about dead Palestinians, Hamas wins the propaganda war or that Israel's critics want more Israelis dead to justify defending them. In reality, critics are pointing out the hundreds of dead Palestinian civilians because they're dead and they don't have to be. Acknowledging the human cost of the current operation doesn't have to be a political statement, but ignoring it certainly is.