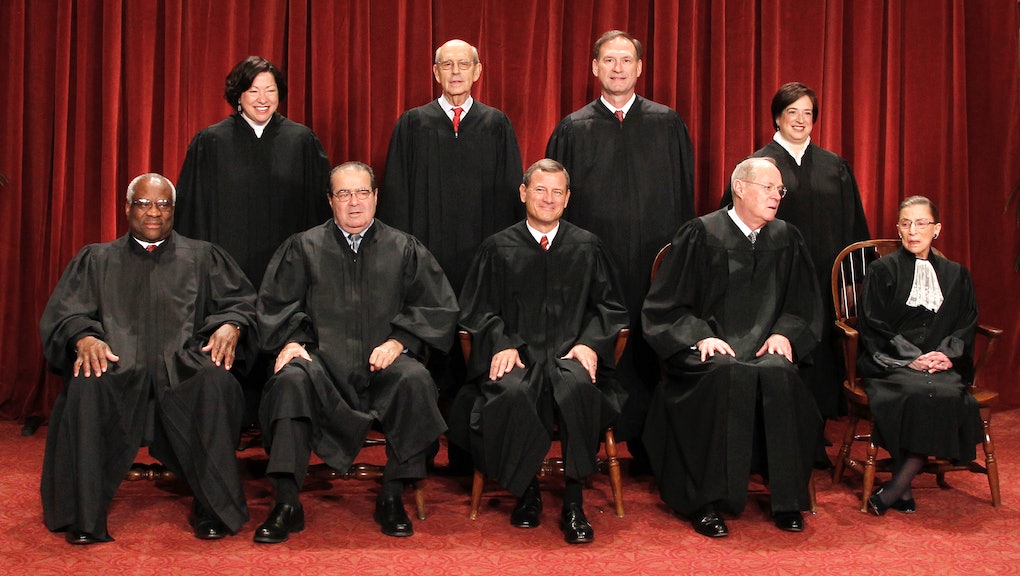 Why Supreme Court Justices Should Have to Run for Office

Many Americans think the Supreme Court is broken. Shouldn’t they have a chance to fix it?

These decisions upset different people for different reasons, but they had one thing in common: voters have little say in the selection in the personnel who decided them.

There is one way to fix this problem. Instead of presidential life appointments, which will likely lead to the absurdity of 1991 appointee Clarence Thomas deciding cases well into the 2030s, justices should have to compete in regular (and, yes, partisan) elections for ten-year, nonrenewable terms—nonrenewable so as to discourage lobbying and campaigning for reelection, thus ensuring the judicial independence O’Connor and others are so concerned about.

Although such a change would require that three-fourths of the states ratify a constitutional amendment, amendments aimed at increasing citizen participation in government, such as the lowering of the voting age and the extension of voting rights to women, have generally been more successful than other measures. Democratically elected justices will continue to make unpopular decisions, much as presidents and congressmen do, but at least voters would now have the final say in their selection.

Judges enjoy a great deal of respect in the United States, much of it due to their self-imposed distance from the people they serve.  Appointed judges can claim that they are beyond the crude and petty political concerns that would threaten the integrity of their decisions. Some lawyers and legal scholars, such as former Justice Sandra Day O’Connor, are so firm in this conviction that they have lobbied to end partisan judicial elections in the minority of states that still hold them, believing that the participants are sullied by having to campaign for their jobs.

As far as the Supreme Court goes, that insulation from the seedier side of the political process has had the intended effect: extreme prestige and a lifetime of political (and, in turn, occupational) security for justices.  These nine unelected officials have generally enjoyed higher approval ratings than Congress or President Obama— in spite of the fact that decisions from the Supreme Court are essentially final, barring a constitutional amendment or a future reversal.

However, the court’s approval ratings have declined significantly since 2009, with a recent Rasmussmen Reports telephone poll finding that only 26 percent of voters now view the court’s performance positively while 61 percent believe that the justices have their own political agendas.  The last time the court received a positive rating above 40% was in October 2009. A recent poll from Gallup suggests that dissatisfaction with the Supreme Court has been rising steadily since 2000. Disapproval for the court hit a high last year following controversial rulings on voting rights, affirmative action and same-sex marriage.

This is actually a positive development.  Given that both liberals and conservatives have significant problems with the Supreme Court’s lack of accountability, the question of judicial elections transcends mere partisan politics.  Political scientists have long recognized that judges on “courts of last resort,” such as state supreme courts and the federal Supreme Court, generally decide cases according to their political preferences.  And arguments against judicial elections seem less compelling in light of highly contested decisions such as Bush v. Gore, which determined the outcome of the 2000 presidential election by a 5-4 party line vote.

Justice O’Connor, who provided the crucial swing vote in Bush v. Gore, would likely claim that elected justices may find themselves afraid to make an unpopular but necessary decision such as Brown v. Board of Education.  This might be true, but it was an unelected Supreme Court that made such misguided decisions as Dred Scott v. Sandford and Plessy v. Ferguson.  Moreover, the connection between selection method and judicial quality is a spurious one; if intellectual merit were the sole metric for appointment to the Supreme Court, former justices but middling-at-best law students such as Hugo Black and Earl Warren never would have been considered and Richard Posner, a long-time appeals court judge who has authored over 40 books, would have been appointed decades ago.

As Melinda Gann Hall and Chris Bonneau argue in their book In Defense of Judicial Elections, elites trumpeting the merits of judicial independence are essentially “waging war on the democratic process.”  The Supreme Court offers a particularly glaring example of these undemocratic forces at work.  Only four of the current justices were appointed during the past two presidential administrations, meaning millions of voters in their late twenties and early thirties have had no say in the selection of a majority of the court’s personnel. Granted such tremendous job security, the justices are not only protected from the more sordid realities of politics but sometimes completely out of touch with reality.  Former justice David Souter, who retired in 2009, joined the court in 1990 never having owned a television set and unaware of the existence of Diet Coke or the music of Motown.  More troublingly, recent appointee Elena Kagan, the court’s youngest member at 54, has admitted “the justices are not necessarily the most technologically sophisticated people” and that social media remains “a challenge for us”—a highly problematic statement given the complicated cases about wiretapping, surveillance, and digital communications that the Supreme Court must decide.