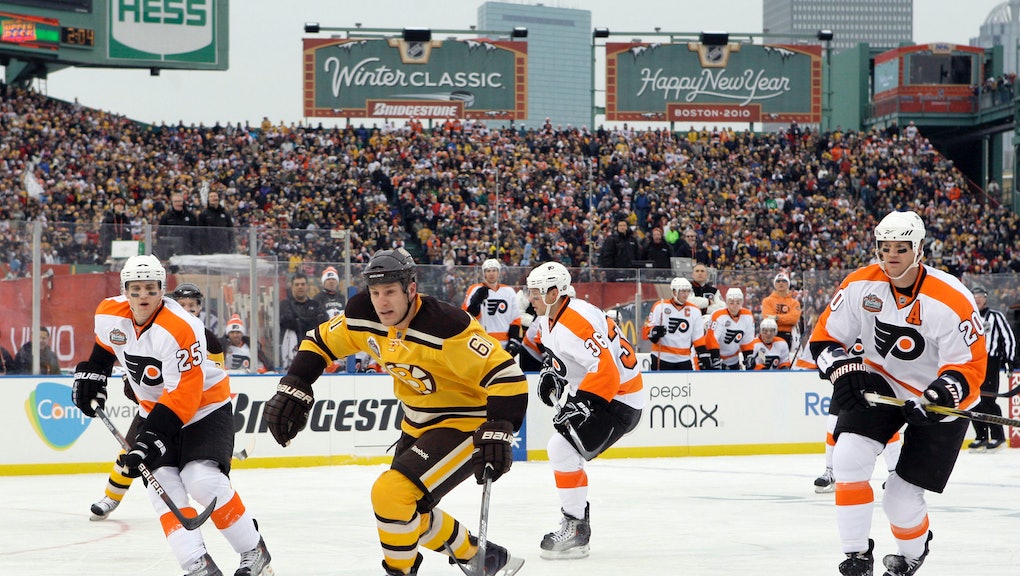 The NHL's annual Winter Classic, which is held outdoors on New Year's Day, is a hit every year not just for the fans, but for the players too, many of whom grew up playing outdoors.

Outdoor hockey is the sport at its "purest form," as Hall of Fame goaltender Mike Richter has said.

According to the 2014 NHL Sustainability Report, though, both the Winter Classic and outdoor rinks around the world are in danger.

"Our game originated on frozen ponds," NHL commissioner Gary Bettman said in the report, which was produced through a partnership with the Natural Resources Defense Council and is the first of its kind among a major sports league. "For that magnificent tradition to continue through future generations [and to continue to hold the Winter Classic], we need winter weather. [As] a League, we are uniquely positioned to promote that message."

The report doesn't just delve into nostalgia, though. Instead, the league clearly enumerates the effects that a 1,300-game season has upon the environment.

During the course of a season, each team spends an average of 130 hours in chartered airplanes, flying about 65,000 miles. Travel alone caused an estimated 105,000 metric tons of carbon dioxide equivalent to be released during the 2011-12 season.

Both the league and the players have been proactive in trying to change that. More than 1,000 players have signed on to the NHLPA Carbon Neutral Challenge, by personally buying carbon credits to help offset the emissions. Taking those credits into account, the league reduced travel-related carbon emissions by about 40% in the 2012-13 season.

After measuring its direct and indirect greenhouse gas emissions, as well as air travel and arena waste, the NHL was responsible for 528,000 metric tons of CO2E during the 2011-12 season (they were able to cut that number down to 380,000 tons the following year).

Compared to the fact that the U.S. economy emits more than 5 billion tons of carbon each year, the NHL's carbon footprint is relatively small. Likewise, if the league were to somehow become carbon neutral, the effects of that laudable success story would be small.

But that's not the point.

For the first time, a professional sports league is taking responsibility for its environmental footprint and taking advantage of its ability to educate its millions of fans.

"The single most important thing we can do to address the urgent ecological challenges we face is change cultural expectations and attitudes about how we relate to the planet," National Resources Defense Council scientist Allen Hershkowitz said in a statement released along with the report.

Maybe some hockey fans don't care much about the future of warm, low-lying cities like Miami. Or the clichéd starving polar bear, stranded on a melting block of ice. Global warming stands to affect the way people live their daily lives, including the fans who watch the Winter Classic every year and the Ottawans whose famous outdoor ice rink was shut down after just 28 days because the weather was too warm.

He may be the most despised man in hockey, but Bettman should be praised for making his league accountable. Will the other leagues now follow suit?