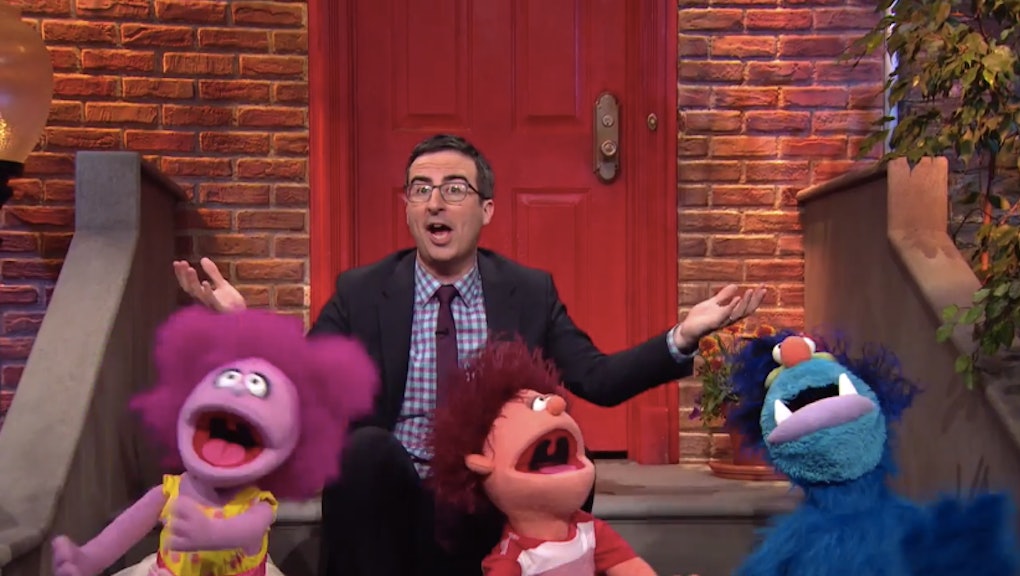 It's easy to ignore conditions in the prison system. Once you've seen John Oliver's tirade on the subject, though, it's impossible not to care.

On a recent segment of Last Week Tonight, Oliver dives into why we love prisons so much, highlighting the disturbing statistics and showing how much this reliance on jail has permeated out to politics and culture. Even Sesame Street ran an episode about having a parent in prison.

He later tackles private prisons and their cost-saving measures, which tend to lead to fewer guards and staff members, more institutional and health problems and more prisoner deaths. One inmate in Arizona, for instance, said that doctors poured sugar in her C-section, a remedy from the early 1900s that fell out of vogue when doctors started using, you know, actual antibiotics.

The stats: The U.S. prison population is now eight times what it was in 1970. And that increase continued despite a drop in crime rate from the mid-'90s on.

That's not all. Nearly 9% of prisons are currently run by private firms, making for a multibillion-dollar industry.

The reaction: Much of the conversation surrounding the prison system has focused on the War on Drugs, and for good reason. Nearly half of federal prisoners are being held for drug crimes.

The Obama administration has at least acknowledged this, with Office of National Drug Control Policy leader Michael Botticelli saying in a blog post earlier this month that the administration's new policy "rejects the notion that we can arrest and incarcerate our way out of the nation's drug problem."

Other parts of the government have also taken action. The U.S. Sentencing Commission, which is unaffiliated with the presidential administration, passed down a ruling that allows nearly half of federal drug-related prisoners — about 46,000 inmates in total — to apply for lighter sentences.

It's a step in the right direction, but a small one. Depending on how sweeping Obama's new policy is, John Oliver may have to keep singing with puppets for a long while.