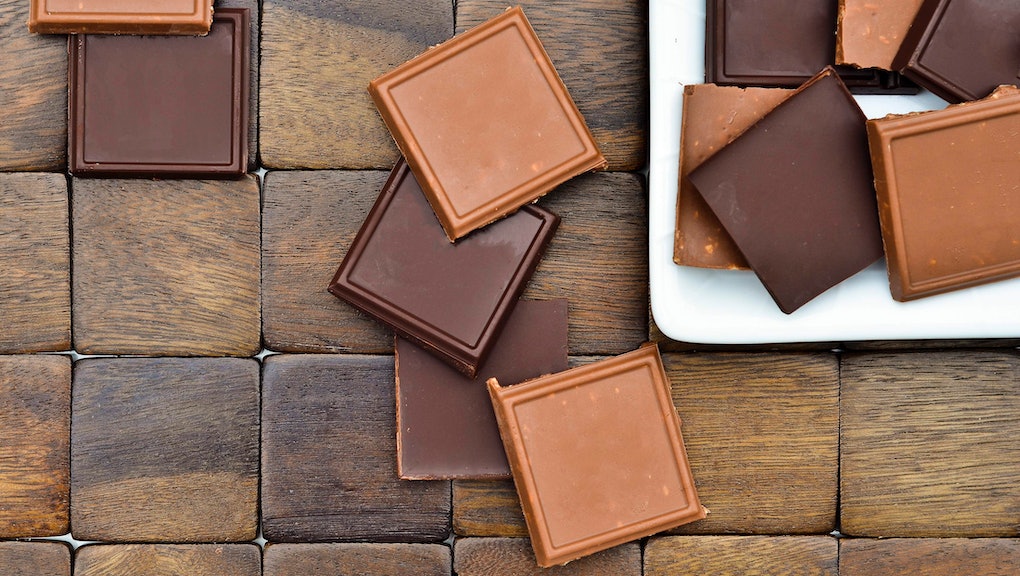 Here's Exactly Why Eating Chocolate Is Good for You

The news: Studies from the past year are starting to explain why people who eat dark chocolate tend to have lower levels of heart disease than people who don't. They're not better than you — they just have anti-inflammatory bacteria in their guts.

Scientists have known for some time that chocolate has lots of flavonols, naturally occurring flavonoid compounds that have antioxidant properties and reduce the risk of heart disease. But until recently, they weren't sure just why flavonols were good for you.

Findings from Louisiana State University and Virginia Tech suggest that the reason is at least partially because dark cocoa powder is mostly indigestible.

The LSU study: By building a simulated human digestive system in glass jars to mimic the stomach, small intestine and large intestine, scientists were able to asses cocoa powder's effect on the fake "stomach." The digestive enzymes went to work, breaking up and separating different components of the chocolate, digesting the flavonols and certain metabolites known to improve blood flow and vessel flexibility. What wasn't digested was mostly fermented into substances that could help lower cholesterol and result in higher levels of good probiotics.

The Virginia Tech study: In March, researchers fed lab mice a high-fat diet and then broke them into two groups; one received unsweeteend cocoa flavonol extract, while the other received a flavonol fraction "enriched with monomeric, oligomeric or polymeric procyanidins." The second group was measurably healthier after the 12-week period, demonstrating that certain flavonol chemical structures are simply too large to properly digest.

In other words: Some "extremely complex" interaction between some of the flavonols found in cocoa and the colon helps produce favorable health results. The compounds in cocoa encourage the growth of healthy gut flora and release compounds that are good for cardiovascular health.

Another theory for dark chocolate's benefits: A study published in the FASEB Journal had researchers feed 70 grams of chocolate to 44 middle-aged, overweight men daily for a month and found that it slightly improved their vascular health and white blood cell function. But dark chocolate enriched with extra flavonols had the same effect as the regular stuff. A separate review in 2012 found that daily consumption of dark chocolate or cocoa lowers blood pressure.

Ultimately, the scientists involved in the research say that the darker the chocolate, the better, since it has less of the added fat and sugar found in other kinds of chocolate. Cocoa powder is particularly ideal.