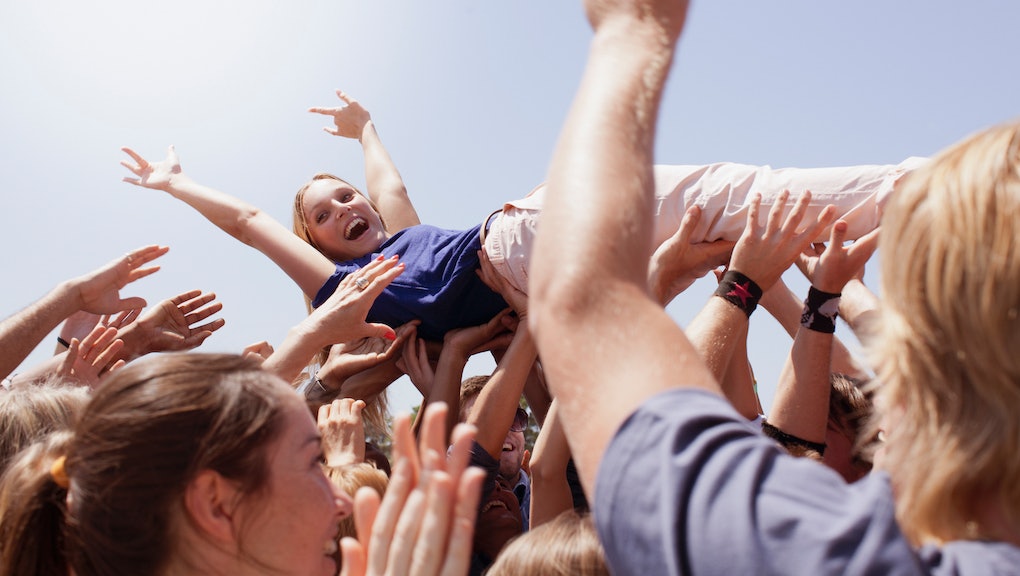 On Tuesday night, Detroit's yappiest rapper Danny Brown jumped on Twitter to do some serial retweeting, as he does. Among the fan mentions that Brown rebroadcast to his 271,000 Twitter followers were three tweets from a young fan bragging about having groped a girl during a Danny Brown show:

If only the problem were this fan and his 60 followers alone. Sadly, this is only one instance of a growing problem at live shows: Women can't be onstage or in the audience without fearing the attitude "kyle" espoused and Danny Brown implicitly endorsed. The fan is presumably talking about Pitchfork Festival, where Brown performed last Saturday to a rabid audience of 18,000. Since Brown isn't in the business of editorializing his retweets, it's unclear whether he means to endorse this kid or out him (only further complicated by his own complex history with molestation at concerts). I'd like to assume it's the latter, but several fans interpreted it differently:

Brown's grope-endorsement is only the most recent episode in a spate of bad behavior by men at concerts. Just this May, Staind singer Aaron Lewis stopped a concert mid-song to berate a group of men he saw molesting a girl while she was crowd-surfing. "If I fucking see that shit again, I swear to god I will point you out in the crowd and have everyone around you beat your fucking ass," he said between songs, in a well-meaning display of the same exact male privilege that leaves men thinking they can touch women wherever and whenever they please.

But a few people, at least, didn't get the message. In a recent interview with Fuse, Echosmith's Sydney Sierota and We Are the In Crowd's Taylor Jardine both relayed tales of having been groped by male fans who'd asked to take photos with them at Warped Tour. And at a sold out Tigers Jaw show in Williamsburg last month, a "fan" jumped on stage during opener Pity Sex's set and forcibly kissed singer/guitarist Britty Drake. He then tried the same thing with Tigers Jaw's Brianna Collins during her set.

But the most well-publicized instance of this trend came when Iggy Azalea swore off crowd-surfing — which she rules at — because she couldn't do it without being sexually assaulted by her "fans." In an interview with Hot 97, she put things pretty succinctly: "Buying my album for twelve dollars doesn't mean you get to finger me when I come to your city." Indeed, it does not, nor does anything other than "yes," or any of these other synonyms for "yes." But as pretty much any woman who's been to a concert — whether she's performing or attending — will tell you, it (somehow) isn't that simple. So what to do?

Violence is not the answer, even though it'd be difficult to discourage any woman who's inclined to do so from kicking any molester square in the groin. But an even better option is not sowing misogyny in the first place. Danny Brown's Twitter stunt is terrible because the kid he retweeted doesn't look a day over 16, the age when delusions of male entitlement get cemented or shattered. If we're so utterly flummoxed by a culture of adult men who, in the 21st century, still feel it's their right to touch strangers at concerts, it might be worth looking at how they got that way.

Until that happens, we'll be constantly backtracking and stating the obvious. That's what Brianna Collins did after that Tigers Jaw show in Williamsburg: "IT IS NEVER OKAY TO TOUCH SOMEONE WITHOUT THEIR CONSENT," she wrote on the band's Tumblr. "Be a decent human being and keep your hands to yourself." Could it be any simpler?