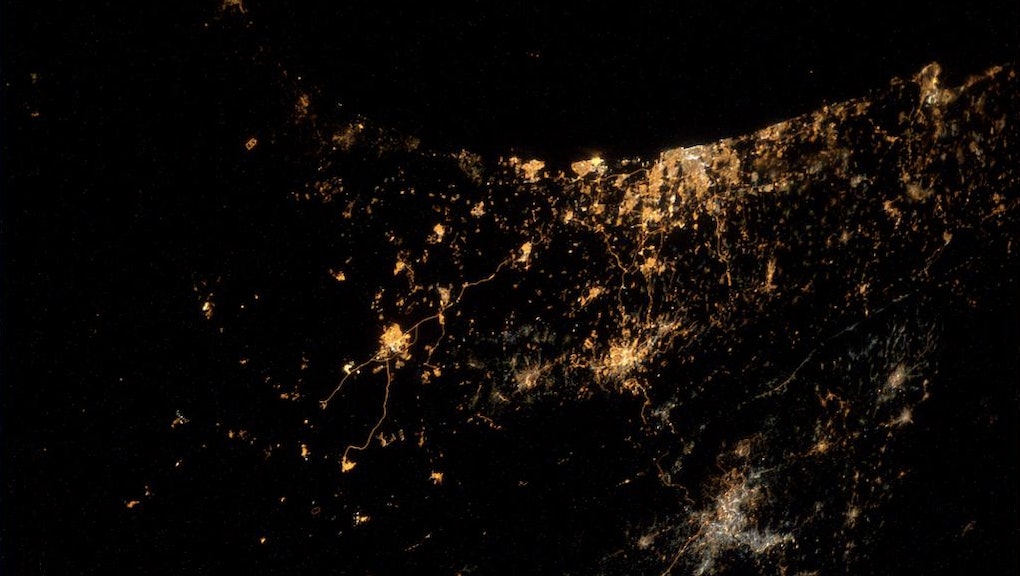 The news: International Space Station astronaut Alexander Gerst has posted his "saddest photo yet." From all the way up in the thermosphere, ISS personnel orbiting 200 miles over the Middle East can see bombs and missiles exploding in Gaza and Israel as the two sides go to war.

Well, that's some perspective for you. The conflict in Gaza is so serious that it's visible from space.

Vox's Max Fisher explains the photo, which was posted at approximately 8:47 p.m. in Gaza/Israel local time:

... north is to the right and south to the left; that dark area at the top is the Mediterranean Sea and the brightest spot, on the coast, is Tel Aviv. To the left of Tel Aviv, just 44 miles to the south, is Gaza City, the largest city in Gaza and the location of a lot of the worst fighting.

What Gerst and the ISS are watching: Fighting between Palestinians and Israelis has now passed the two-week mark and has culminated in an all-out IDF ground invasion of Gaza. Hamas and other militant groups have fired some 2,200 rockets at Israel in the current escalation, while Israel military units have been just as hard at work firing at the insurgents and their munitions stockpiles. Fighting has been taking place almost exclusively in densely populated urban areas, while Hamas resistance has been fiercer and better-coordinated than anticipated by IDF ground forces.

So far, at least more than 700 Palestinians have been caught in the middle of the fighting and died. Many international flights to and from Israel have now been halted due to concerns that planes could be fired upon amidst the fighting. The ongoing ground war in Gaza has also sent the UN into crisis mode and the brewing political fallout has barely even begun.

Right here on Earth, the picture is grim enough. But Gerst and the rest of the ISS crew aren't down here to debate who's right and who's wrong.

All they can see from space are humans busy blowing each other up and that is ultimately devastating.