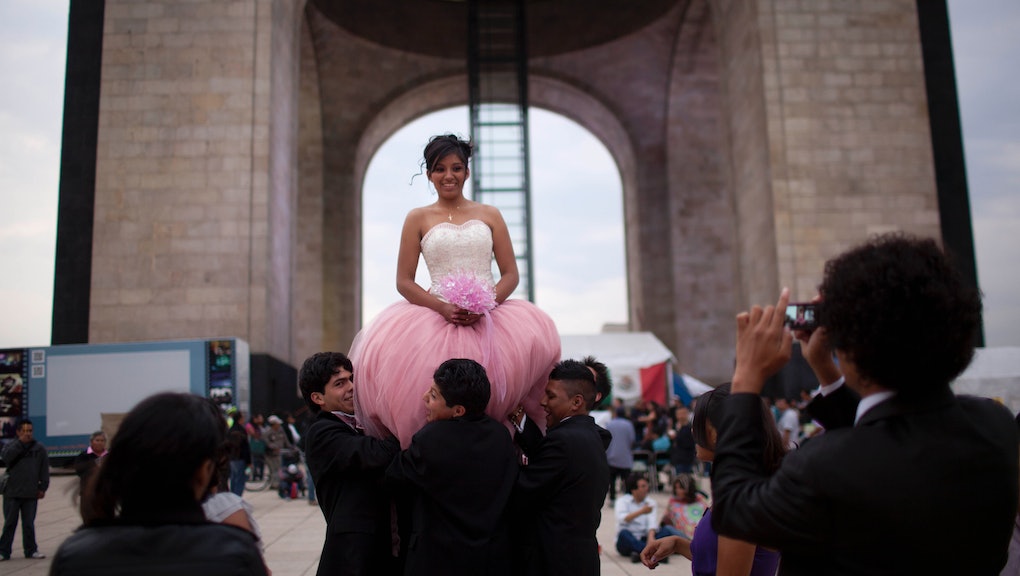 When does a child turn into an adult?

In the United States, that moment probably comes somewhere after emerging from the angry fog of being a teenager.

It's a relatively recent construct; in the U.S., the idea of teenagers didn't really manifest until the 1950s. In 1945, the New York Times published the "Teen-Age Bill of Rights," which outlined some of the demands that we can all remember yelling at our parents about, including "the right to let childhood be forgotten, the right to a 'say' about his own life, the right to make mistakes and find out for himself, the right to have rules explained, not imposed, the right to be at the romantic age, the right to a fair chance and opportunity and the right to question ideas."

But that transition from childhood to adulthood isn't necessarily just marked with a few embarrassing haircuts. It can be celebrated with a wide variety of rituals, ceremonies and traditions throughout the world in various cultures, religions and countries. This celebration may depend on one's physical, mental or spiritual development to signal adulthood, or it may commemorate sexual maturity. It may also be steeped in historical significance and tradition.

In the United States, for example, some might mark that time period with the Sweet 16; wealthier families may hold grand debutante balls. In many parts of Latin America, people celebrate Quinceañera, a coming-of-age celebration on a girl's 15th birthday.

Some practices, however, are slowly becoming outdated, due to the high cost of participating, or because of their reinforcement of gender norms and stereotypes. Nonetheless, these practices highlight how different cultures, religions and people view this milestone in one's life and what it means to be an "adult."

Here are just a few of the ways we celebrate coming of age around the world:

Among Nepal's Newari people, boys attend a coming-of-age ceremony known as Bratabandha, which includes completely shaving his's head except for a tuft of hair known as shikha and making a vow to observe prescribed rules and regulations to become a man.

In Ethiopia's Hamer tribe, a boy becomes a man by participating in the bull-jumping ceremony that must be completed before he is allowed to marry. To pass this test, he must clear the animals four times, while naked except for a few cords tied across his chest, which symbolize the childhood he is leaving behind.

After he completes the test, he will then join others who have done so and supervise these events in other Hamer villages, which end with celebratory feasts, sorghum beer and traditional jumping dances.

When Amish children turn 16, they are encouraged to experiment, explore and temporarily break away from their traditional world through a practice called rumspringa, which literally means "to run around." The practice allows them to get a taste of the modern world, after which they can choose if they want to come back to the church after the experience and be baptized as adults.

For some, this may be a time for singing, dancing, dating or social media. For others, this may mean late-night parties, drinking beer and smoking.

Since 1948, turning 20 in Japan is recognized with a national holiday in January called Coming of Age Day (Seijin no hi). It celebrates the age where young adults gain the right to vote, smoke tobacco and purchase alcohol. Young men and women dress in traditional kimonos or formal attire, and then participate in coming-of-age events including purification ceremonies and competitions.

In Apache tribes, a girl becomes a woman during a four-day ceremony performed soon after her first menstruation.

Dressed in traditional costume, she perform the ancient Sunrise Dance and become "Changing Woman," who was impregnated by the sun and rain to give birth to the Apache people.

The girl will be fed by a sponsoring godmother, who will also dance with her. The process concludes with the painting ceremony that will complete her "metamorphisis to womanhood."

In South Korea, young people participate a traditional Confucian ceremony for Coming of Age Day on the third Monday in May. In the Gwan-Rye ritual, men wear a cylindrical hat woven with horse hair and bamboo, while women braid their hair up with an ornamental hairpin, marking their transition from children to adults.

The bar or bat mitzvah is an ceremony where a Jewish male or female is required to fulfil all the Jewish commandments and accept his or her religious responsibilities as an adult.

While the bar mitzvah, which means "son of the commandment" in Hebrew, is mentioned in the Bible, the observance of bat mitzvah ceremonies was introduced in 1922 in the United States.

"The Friday night before the service, my father decided what I was to do. I was to recite the blessings, read a portion of the Torah sidrah ... in Hebrew and in English and conclude with the blessing — and that was it," said Judith Kaplan Eisenstein, the daughter of Rabbi Mordecai Kaplan, whose bat mitzvah is considered to be the first one in America. "And that was enough to shock a lot of people, including my own grandparents and aunts and uncles."

For many Americans, the coming-of-age celebration for young women is her Sweet 16 party. The young lady wears a tiara and a formal dress, leading dances and a candle-lighting ceremony where she invites the important people in her life to light the candle with her. The idea stems from the fact that most states allow a person to drive unchaperoned at age 16, which is also widely considered the age of consent.

In many Latin countries, Quinceañera is the celebration of a young woman's 15th birthday, where she wears a ball gown and a small crown. A traditional Quinceañera usually begins with a special mass, where she will renew her baptismal vows, and is followed by a "fiesta" or reception where she is accompanied by a "court."

During the beginning of the fiesta, she will wear flat shoes until her father presents her with high-heeled shoes on a pillow and places them on her feet, symbolizing her transition from a girl to a woman.