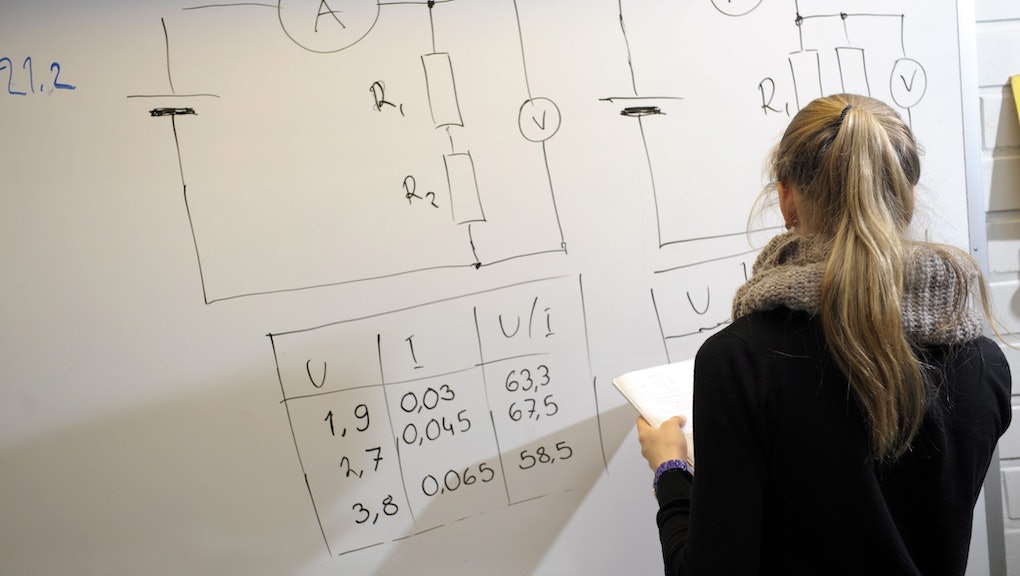 What America Can Learn From Finland's Remarkable Educational Success

Imagine high school without valedictorians, cramming for tests or hours of homework each night.

That's what school is like in Finland, which has one of the highest-ranked education systems in the world. It's one of the top five ranked by Pearson, an education and publishing company. Although its rank in the OECD's PISA dropped in 2013, it has consistently ranked among the top in the survey since 2000.

Meanwhile, the U.S. system, with all its Harvard hopefuls and AP class students, tested average.

So what's responsible for the discrepancy? Finland doesn't pile the pressure on its students — it encourages imagination and freedom. It doesn't insist that A's in advanced level classes define a successful person. Instead, it fosters an environment of achievement through self-reliance.

The first thing American systems can learn from Finland is that there should be less pressure on students to be "successful" in academia. College is free for all Finnish students, relieving the pressure to get into a good school. They're a little nervous about getting into the best university, but they know it will be paid for. This makes their lives as children more relaxed. Their parents don’t worry about their academic trajectory from when they are five.

In Finnish schools, there are no gifted classes, which means less pressure. Instead of encouraging children to compete, Finnish schools encourage higher performing students to help their weaker counterparts. The result? an environment where students think less about rank, and more about learning.

In the U.S., on the other hand, parents worry about getting their children on the fast track to a good college from as early as preschool. This puts pressure on the child to get good grades at a young age. Self-reliance isn't taught as much as how to conform to specific expectations. Gifted classes in American high schools create hierarchies among students and parents. Rules in the classroom sometimes repress their creativity. Multiple choice tests, book reports and tough discipline can cause brilliant students to fall through the cracks or lose interest in school.

It's also the teacher's job to ensure that every individual stays focused and motivated. Teachers are at their best when they feel challenged and respected, which is why so many Finnish teachers are good at what they do. The culture surrounding teaching in Finland is more prestigious than that of the U.S., and the teaching profession is elevated on a higher level. To be a teacher there is highly competitive: More than 40 people sometimes apply for a single job.

And here's the kicker: Their salaries are similar to U.S. teachers. It's with the responsibility that comes the prestige. They are considered the entrepreneurs of Finland's curriculum.

Teachers in the U.S. are underpaid and underappreciated. They receive less professional development and feedback than other teachers in the industrialized world. Two-thirds think their profession is not valued by society, according to the OECD Teaching and Learning International Survey. Teachers feeling undervalued negatively affects student achievement, the OECD found.

The U.S. will never be Finland, of course, and doesn't want to be. It would be impossible to duplicate the system entirely. Finland is unique in that it doesn't share its language with any other country, and many children learn to read in both Finnish and English from an early age. They read books in English before they are translated to Finnish and the English subtitles on TV. In the U.S., 9% of students in public schools are learning English. Plus, the high taxes in Finland allow the country to provide equal funding per student. In the U.S., the disparity between public schools in poorer areas and private, well-funded schools is notorious.

So the key here is to take useful cues from Finland. What we can learn is the Finnish people's love of reading and their effort to take pressure off growing teens. They even have ice cream trucks with books. This makes education less of a burden and more of a fun thing. In Finland, the culture of beating the odds to get to Harvard has not fully caught on, which bodes well for its students.