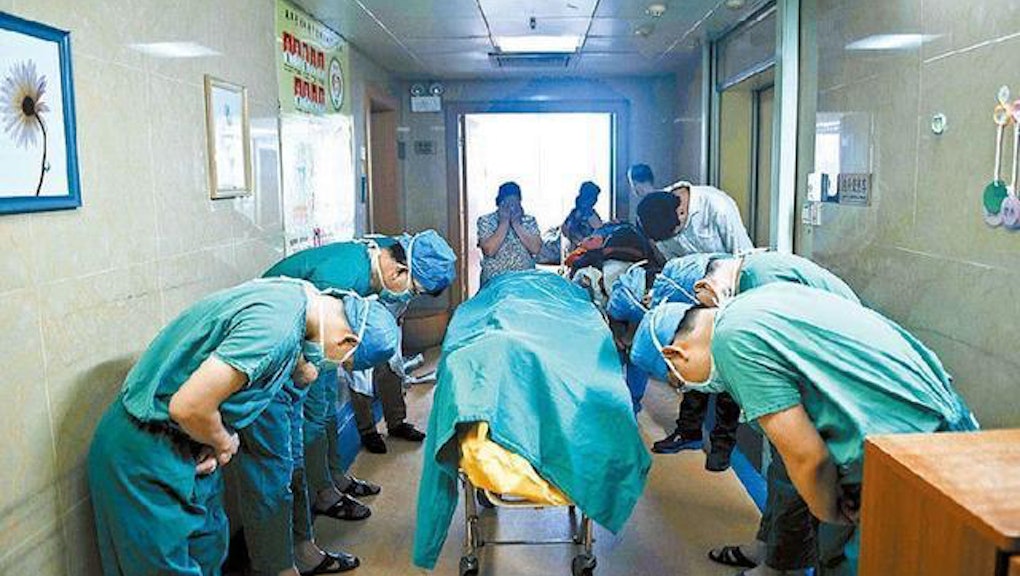 He was able to do more for the world in his 11 years than most of us could accomplish in 100.

The boy on the gurney in that powerful photo is 11-year-old Liang Yaoyi, and according to a QQ news story translated by chinaSMACK, he decided to donate his kidneys and liver after suffering from an eventually fatal brain tumor.

The operation was performed in June, and doctors bowed to Yaoyi and his mother three times in recognition of his sacrifice.

From the QQ story:

"The suffering caused by the tumor even caused him to change his personal dreams and aspirations. If he could only survive, he would become a doctor and cure everybody's illnesses. [...] Regrettably, he would not be able to become a doctor, and thus he decided to donate his organs as well as his own body to a medical school, therefore fulfilling his dream of entering a medical university in this way."

In the U.S.: According to the Department of Health and Human Services, someone is added to the list of people waiting to receive an organ every 10 minutes. While an average of 79 people receive transplants each day thanks to people like Yaoyi, about 18 people die daily due to a shortage of donated organs.

While the number of people on the waiting list has shot up over the past few decades (there are now more than 100,000) the number of donors has barely moved in comparison.

That means adding your name to the organ donor list, like 120 million other Americans, is one small step toward saving tens of thousands of lives.

Opt in, opt out: Different countries have wildly different organ donation sign-up rates, mostly based off their opt-in or opt-out approaches.

The U.S. has an opt-in policy, but still manages to have the fourth-highest organ donor rate and the best organ transplant rate in the world, likely because the process simply involves ticking a box when applying for your driver's license.

So if you're thinking about your organ donation status, keep Liang Yaoyi in mind. If an 11-year-old boy facing death could make that decision, so can you.