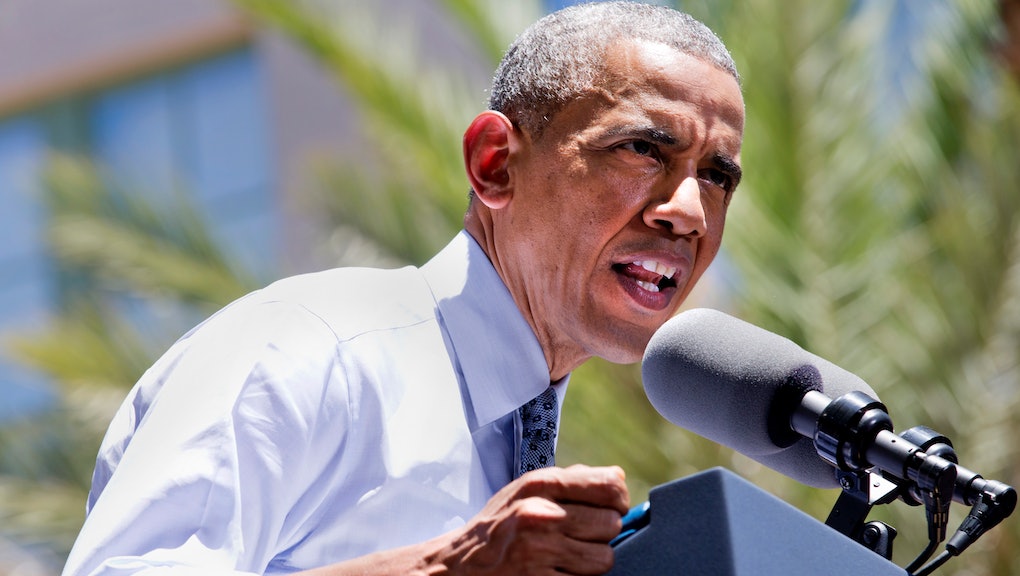 The news: It looks like Obama's next hot button issue is at the other end of the wage spectrum: putting corporate fat cats in their place.

President Obama is finally taking a stand against corporate tax loopholes, pressuring Congress to eliminate rules that allow profitable companies to move their tax bases overseas. He specifically wants to end a shady practice known as tax inversion, in which big businesses reincorporate in low-tax countries overseas but keep the vast majority of their operations in the U.S.

"I don't care if it's legal, it's wrong," Obama said at a speech in Los Angeles on Thursdays. A White House official argued that inverters "are essentially renouncing their American citizenship so that they can ship their profits overseas to avoid paying taxes — even as they benefit from all the advantages of being here in America."

How big a problem is it? According to the Wall Street Journal, ending tax inversion schemes would enable the U.S. to collect an additional $20 billion in revenue over the next decade. Fortune magazine's senior editor Allan Sloan predicts that number is "way, way, way low" because it underestimates how many companies are considering it, projecting "an economic emergency whose outlines are becoming clear to anyone willing to see them."

American companies have a huge incentive to move to places like Ireland, where the corporate tax rate is a paltry 12.5%. Typically it's done by merging with a smaller foreign company located in a low-tax country. From 2004 to 2013, at least 47 U.S. companies decided to cut loose and move forward with inversion. Pharmaceutical giant Pfizer tried to flee U.S. taxes earlier this year by buying Britain's AstraZeneca, the biggest company so far to do so.

Will something actually get done? There's a bipartisan agreement that something must fix this situation — and soon. Democrats favor retroactively applying the rules starting from May of this year, which would affect several major multi-billion dollar corporate deals and send a strong signal to U.S. businesses. Republicans would rather overhaul the tax code.

Some on the right claim that inversion isn't a problem because corporate taxes are too high and the tax code is broken anyways, with combined federal and state rates approaching 39.2%. But tax rates on corporations in America are actually very low, standing at a cumulative federal and state rate of 12.1% in 2011 thanks to a complicated web of loopholes, exemptions and tax credits.

Fixing the tax system should be a priority, but not because taxes are too high. It needs to be fixed because companies are managing to game the system and pick and choose where they want to pay taxes, shifting the burden to everyone else. Apple, for example, dodged taxes on $74 billion in income from 2009 to 2012.

But Sloan notes that at least Apple remains American. Inverters want to exploit loopholes in the tax system to dodge it entirely. He also posits that the "conventional wisdom" that companies are inverting because American taxes are unfairly high makes less sense than a less sympathetic reason: Corporations suspect this loophole will be fixed and want to get out before it does.