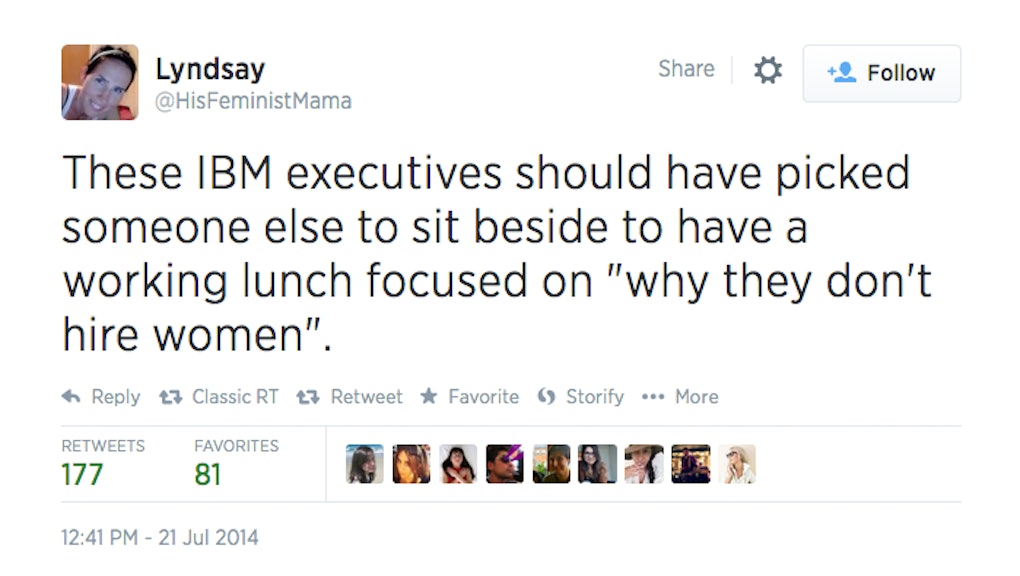 The news: Toronto-based editor Lyndsay Kirkham has started a firestorm this week after overhearing what was apparently an incredibly sexist conversation between IBM executives at lunch — and live-tweeting it.

Unaware that they were transmitting sexist nonsense to cyberspace, the IBM executives openly discussed "why they don't hire women." If you take Kirkham's account at its word, it actually gets way worse.

She also noted this wasn't exclusively a sausage-fest, with a woman echoing the remarks.

In a discussion with the Daily Dot, Kirkham noted the executives also said women need more off time to "decompress from work related stress" and complained by name about a number of current female IBM employees they expected to take time off for pregnancies in future years. (Wow.) Kirkham was so taken aback she initially thought the group was drunk.

Kirkham told Think Progress she thinks the conversation highlighted a systemic problem. "It's rampant," she said. "Workplace issues around equality [in technology companies such as the] gaming industry are everywhere."

Some background: Kirkham's Twitter tirade at the very least highlights a pervasive trend in the tech industry. According to a study in 2008, an astonishing 52% of women (most between 35 and 44) drop out of private-sector science and technology jobs around the world and never return. Center for Work-Life Policy Director Laura Sherbin said that "The top two reasons why women leave are the hostile macho cultures — the hard hat culture of engineering, the geek culture of technology or the lab culture of science … and extreme work pressures."

Part of the problem is thanks to overt sexist attitudes like those Kirkham encountered. One study found that participants were twice as likely to hire a man over an equally-qualified woman for a mathematics-related job. Bureau of Labor Statistics numbers show the share of women programmers declined from 24% in 2000 to 21% in 2010, which Businessweek partially attributed to a "frat boy mentality" among tech startups dominated by young men. Tech people call them "brogrammers." But sexism is far more widespread than the bros, which is probably a big reason that just 17% of Google's tech employees are women.

Another key barrier is that women are still expected to do most of the work in raising a family, which gives them less time to devote to an intensive STEM job. This has also led some exasperated women to have lower career expectations than men, suppressing their salaries and job potential.

This situation is slowly changing, but as Kirkham's hopefully honest Tweets illustrate, there's still a ton of work to do.