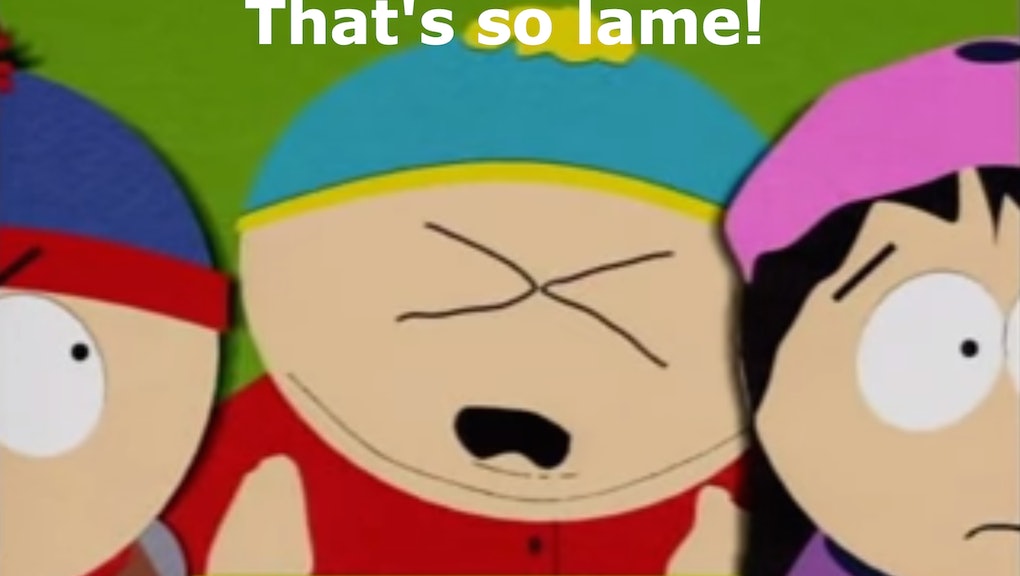 7 Things People With Disabilities Are Tired of Hearing

These words are flung around so often, and in such ill-advised and misappropriated ways, it's easy to forget what they were actually intended to depict: People with ranges of physical, intellectual, cognitive, mental and other disabilities.

In fact, the problem is now so pervasive that the words are written into love song lyrics, movie scripts and deeply embedded within everyday words and phrases. The worst part? Most people don't even realize it.

The way we use such words is important, however, because it reinforces the bias, discrimination and outright demeaning behaviors and situations routinely encountered by people with disabilities. It's an experience summed up in yet another "-ism" plaguing broader society: Ableism.

Each of us can be more precise and intentional with our language. It's a small step, but one that can help minimize the lasting, damaging impact these words and phrases can have on people who navigate life with a more limited range of abilities. It's not about so-called political correctness; this is a conversation about respecting people with ranging abilities.

In many ways, ableism is so pervasive that many people — including those who work at media outlets — don't realize when they are being casually or overtly biased. Even as a person with a disability, I know that I have forgotten my own privileges in situations. Below are some of the ways we can be more cognizant about and precise with our language. Hopefully, it will also be a way to start raising some lasting awareness:

The Black Eyed Peas' hit song, otherwise known as "Let's Get It Started" was originally recorded and released as "Let's Get Retarded."

Not only does Fergie sing the offending word in the chorus, Will.i.am and crew make multiple parallels between enjoying a wild night of partying to "getting stupid," "losing all intellect," allowing people to "walk you through it" and to "bob your head like epilepsy."

The song later became popularized as "Let's Get It Started" only because The Black Eyed Peas reworked the title and lyrics for the NBA in order to use it for promotional purposes during the 2004 playoffs. Not long after, it was given its own single and music video, which won the group a "Best Rap Performance" Grammy among three nominations, including Record of the Year.

The main issue, which the band has yet to publicly address, lies in the fact that mental retardation is no laughing matter. In fact, the term itself isn't used as much anymore given how "retarded" has been perceived and appropriated by popular culture. Today, many cognitive and intellectual issues of ability described as a "developmental delay," an "intellectual disability" or more specifically as part of an "autism spectrum."

Whatever Fergie croons, whether it be a fun night on the town with or without alcohol, should never be equated to someone else's daily struggle.

Carrie Underwood may be considered one of America's sweethearts, but her 2012 Billboard No. 1 song "Good Girl" displays ableism at its most casual, particularly in an otherwise catchy chorus:

Although "Good Girl" won Underwood a 2012 CMT Music Award for Video of the Year, the song is complicated by the comparison Underwood makes between not being able to physically see and a woman's inability to recognize that her man is a lying, no-good excuse for a lover. In fact, blindness is a real problem in the United States: According to the report for the 2012 National Health Interview Survey, 20.6 million American adults age 18 and older reported experiencing vision loss.

But Underwood's song isn't the only example of actual, physical blindness being misused as a metaphor for people misunderstanding certain behavior. In Destiny's Child's "Bad Habit," Kelly Rowland sings "Have you ever loved somebody, so much that you was just too blind to see past all of the pain they was causing you?" And in common vernacular, it manifests in how the term "blind" is used with regard to race, such as "race-blind affirmative action."

In this case, as with any other instance of ableist language, it's important to keep in mind a more linguistically precise alternative or two. Instead of describing something or someone as "blind," which is a physical issue of ability, one could say that someone "couldn't understand" something or that a certain process "is conducted without regard" for a particular characteristic.

It's a sentiment so many people have shared, whether to describe the boss who can't seem to stop ranting or the classmate who's very much having a bad day.

But does distemper or an unpleasant mood mean that person has a mental illness being treated through medication? Absolutely not.

Far too often, instead of taking the more empathetic approach to someone who's emotionally struggling or seems angered beyond belief, many people quip that such a person is "off their meds," often in a dismissive tone. It casts aspersions on people who, in real life, use medication as part of a comprehensive health plan in order to keep symptoms of mental disorders manageable.

As an aside, if you know for sure that said person is on Zoloft, Adderall, Zyprexa, Prozac, Abilify, Ritalin or any number of medications treating issues such as depression, ADHD and other mental and intellectual issues of ability, give that person the respect of approaching them carefully to ask if they are taking care of themselves.

"Someone call the doctor; got a case of love bipolar."

If you listen carefully to the words of Katy Perry's 2008 hit "Hot N Cold," there's a actually a rather ableist comparison between a mental illness filled with bouts of depression, mood swings and manic behavior and the instance of a man's on-again, off-again commitment to his romantic partner.

Bipolar disorder affects nearly 6 million Americans in a given year, according to the National Institutes of Health. And even though it's a documented mental health issue, some still use the potentially debilitating condition as a clever punchline. Bipolar disorder recently has functioned as part of Hollywood plots, including Homeland and Silver Linings Playbook.

Writing for The Fix, Nic Sheff said bipolar disorder wasn't so trendy when he was diagnosed some years back.

"The bipolar character played by Claire Danes in Homeland, on the other hand, always seems to be a crying, bug-eyed, chin-quivering mess—someone who’s constantly freaking out, screaming, ranting or drinking white wine in a bath listening to jazz with candles all around," he said. "When I was watching the show with my wife, she kept jokingly asking things like, 'Is that what you’re going to act like?' ... But the truth is, at least for me, if I stay on my medication, I really won’t act like that."

5. "The economy has absolutely crippled my finances."

The last economic crisis, which began in 2008, was a hard-hitter for many companies, families and individuals. But to say it "crippled" one's financial dealings isn't the best idea.

Crippled has been used, often pejoratively, to describe people with a range of physical disabilities related to movement for many years. It's also been used to describe amputees. While the term itself is quite outdated, it still pops up from time to time, often in news headlines. This is another example of an issue so pervasive that disability rights advocates haven't been able to push it to mainstream levels of awareness just yet. But even though the phrase doesn't have the same, identical negative connotations of, say, retarded, it's hard to argue for an expression that compares an inability to spend money to an actual physical issue of ability. There are other examples for damage.

Similar to how the term "cripple" is deployed, lame operates almost the same way with regard to ability, but is often used as a pejorative.

By definition, lame refers to a part of the body that is restricted in terms of physical ability, in a way that makes its use difficult or painful. However, the term is cuurently used negatively to signal that a person is square, inferior, nerdy, nasty or worthy of contempt and shame.

In one commonly used phrasing, a "lame duck" president or elected official is in the final moments of their tenure and thereby relatively powerless on matters of public policy while a transition to new leadership awaits. But such use of simile makes a person's limb restrictions unnecessarily analogous to being "feeble" or "inferior," thereby removing all sense of power and agency for an individual who has a disability.

To be very clear, it is never okay to shame or mock other people with a word used to describe a physical issue of ability. Instead of using this word in an alarmingly offensive way, one could opt for more precise alternatives such as "unsatisfactory," "unconvincing" or "inept" to best characterize such sentiments.

7. "Will everyone please stand?"

You may recognize this phrase from various touchpoints in everyday life. It's a common request in courtrooms, at churches or before the "Star-Spangled Banner" gets played at a major sporting event. However, not everyone retains the phyiscal ability to stand, whether that be a permanent or temporary status.

In addition, this phrase functions along a spectrum of ableist words and phrases that liken someone's inability to reason with a physical issue of ability. Those phrases include "cut off at the knees" and "not having a leg to stand on."

Instead of using language that operates with the assumption that everyone can stand, it may be a better idea for priests, ballgame announcers and even guards in courtrooms to say "Will everyone stand, as you are able?" to be all the more inclusive and conscientious.

It only takes a moment to think through the impact of the words that you say before uttering them and hurting someone else for many moments thereafter.