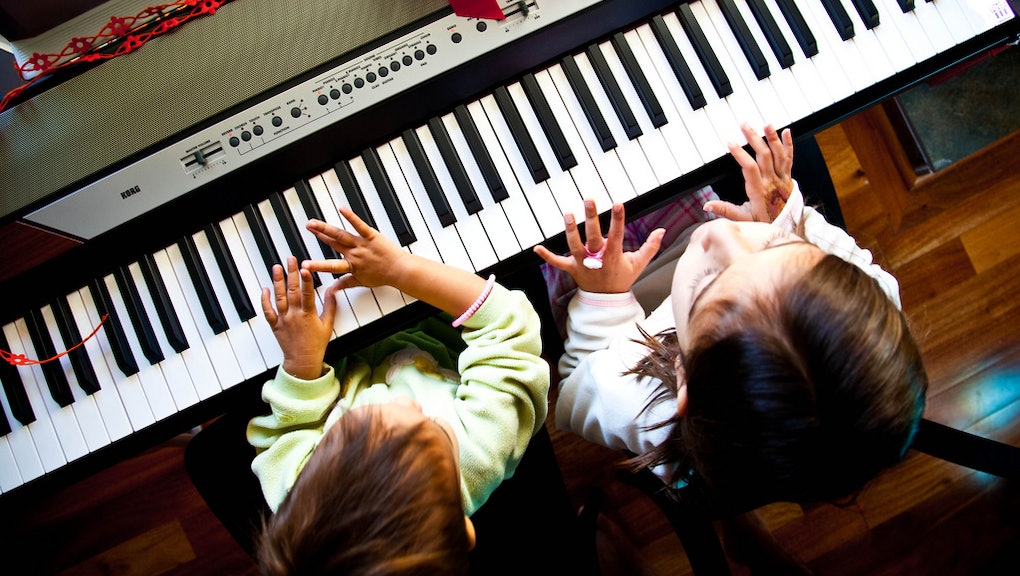 The Scientific Reasons We Should Teach Music to Kids in School

"What benefit could there be to diverting time and energy to making plinking noises? ... As far as biological cause and effect are concerned, music is useless."

That quote from renowned evolutionary psychologist Steven Pinker pretty much sums up the official stance on music in this country. Anybody who has grown up with music knows that's not true, but it's sadly a convenient belief for school boards looking to save money. Over the past six years, since the dawn of the Great Recession, we have seen the quality and quantity of music programs plummet. School districts in Florida, Kansas and Arizona have scaled their programs back to the extreme. In 2009, California diverted $109 million from music programs, resulting in closed music departments across half of California's 10,000-plus public schools. Educators in New York City estimate that up to 85% of public school students have not received adequate musical instruction by the time they reach high school.

The crisis in music education is real. And there's scientific evidence that we're depriving our kids of tremendous cognitive benefits as a result.

Even a glance at the science proves these school boards wrong. An epic longitudinal study by researchers at the German Institute for Economic Research concluded in no uncertain terms that music training "improves cognitive and non-cognitive skills more than twice as much as sports, theater or dance." All the way back in 1999, James Caterall, an arts education policy analyst at UCLA, found that students who studied music had higher grades, higher test scores, better attendance records and higher rates of community engagement than other students. We've known empirically for a long time what we've intuitively known for centuries: Music is good for you.

That has a neurological basis too. Mathematics, especially, are aided by music education because it targets a very specific set of brain activity: the development of spatial-temporal reasoning. Highly developed spatial-temporal faculties are imperative for working through solutions to the complex problems in fields such as architecture, engineering, science and, obviously, mathematics — fields that our country desperately needs more children to pursue if we're to remain competitive in a globalized economy. Even more compellingly, UCLA's study found that these benefits were even more pronounced in students from low-income families, proving once again that music education plays a major role in closing the achievement gap. Disadvantaged students who performed with their school band or orchestra were more than twice as likely to be performing at the highest levels of math than peers who did not receive musical training. Turns out there's something to the "math rock" genre after all.

It isn't all math. Music education also does major work on the language-processing parts of our brains. To learn to read, children need to have "good working memory, the ability to disambiguate speech sounds and make quick sound-to-meaning connection," explains professor Nina Kraus, director of the Auditory Neuroscience Laboratory at Northwestern University. "Each one of these things really seems to be strengthened with active engagement in playing a musical instrument." And once again, musical skills are absolutely essential to low-income students for whom English may be a second language — students who might otherwise struggle to keep up with their peers.

All those benefits persist long after a child stops taking lessons. Numerous longitudinal studies show that taking music lessons as a child increases brain plasticity, and can help men and women resist the effects of aging and cognitive decline. If you doubt it, just watch this viral video of a man pulling out of his dementia thanks to a familiar old song.

But music education isn't only about shaping the brain. It helps develop the well-rounded people we most need in our society. Studies have also found that lower-income students who receive high levels of arts engagement are more civic-minded and are more likely to exercise their right to vote, do volunteer work, finish a bachelor's degree and choose a professional career path.

That's why we need music education. It doesn't exist in a bubble; it isn't useless. Music gives kids the cognitive abilities they need to succeed in life. Not only that, it closes the achievement gap between classes that has long plagued our schools. It gives kids confidence, cognitive abilities and imagination. Why would you cut that? After all, what better things can an education provide.