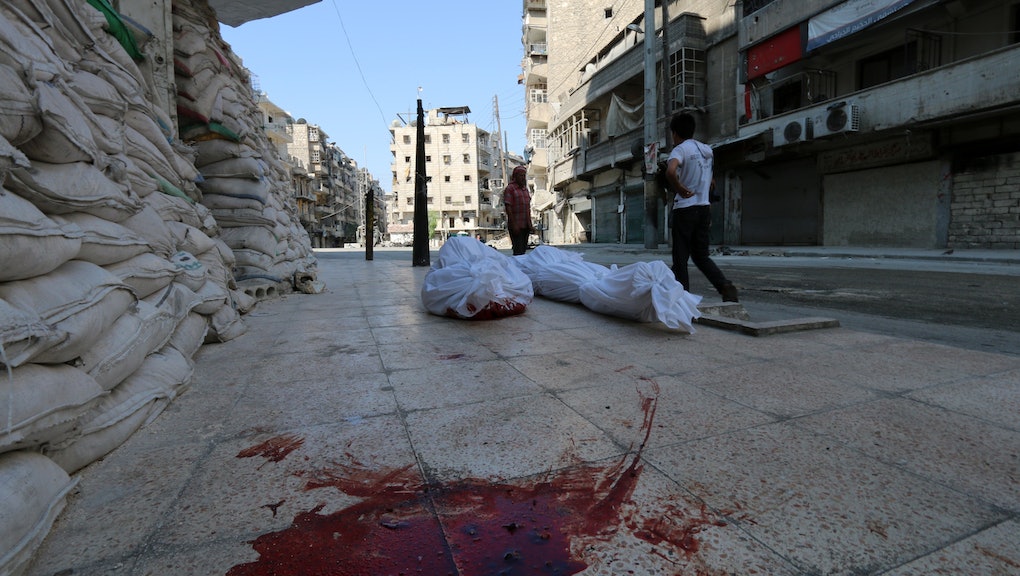 In the last week, 1,700 people died in Syria, making it the deadliest seven days since the conflict started three years ago. Of those casualties, 700 died in two days. Experts say this week marks a shift in the pattern of fighting, as opposition groups increasingly fight each other, leading to higher death tolls.

And yet, when you think of the heartbreaking and significant news reported in the last week, the death toll in Syria doesn't spring to mind. But this week has left civilians even more vulnerable, and the world should be paying attention.

So what has happened?

President Bashar al-Assad was sworn in for a third term on July 16. This followed a landslide election six weeks earlier, in which Assad won 90% of the vote. The opposition and its Western allies called this a farce, as voting had only been held in government-controlled areas. Assad's new term will run another seven years.

Speaking on his election day from the presidential palace in Damascus, Assad claimed victory over the rebels. "Syrians, three years and four months … have passed since some cried 'freedom,'" he said. "They wanted a revolution, but you have been the real revolutionaries. I congratulate you for your revolution and for your victory."

What followed his "victory speech" was the most intensive fighting on the streets of Damascus for many months.

Outside the capital, the biggest blow to the government was the capture of the large Shaar gas field, east of Homs by IS (Islamic State) fighters following two days of heavy fighting. A clip in a BBC report containing images "too graphic to be shown uncensored" shows the bodies of 250 government soldier killed by rebel fighters in this battle alone.

In several areas this week, rebel groups have fought each other, which leads to further vulnerability for Syria's civilian population. IS is expanding and continues to claim religious authority over all Muslims. In so doing and as it works to consolidate its territory in the east, it comes up against rebel factions like Jabhat al-Nusra.

IS is "on a real tear," according to Joshua Landis, Middle Eastern expert on Syria Deeply. "There's also been a lot of fighting among the more moderate militias, because everyone is jockeying for territory — they want to get their own states."

When Islamic State in Syria and the Levant (ISIL) announced the creation of a formal Islamic state at the end of June, in the process changing its name to IS, it created a domino effect for other rebel groups to scramble for territory in northern Syria, Landis said.

All of this is terrible news for civilians. The BBC reported 230 civilian deaths in shelling by the regime this week. Where once they were fleeing fighting between Assad's regime and jihadist groups, the violence between the various rebel groups means the danger is now more widespread.

"Civilians have increasingly limited prospects between leaving the country or being caught in the crossfire," Middle East scholar Andrew Bowen told Syria Deeply.

The UN recently appointed Italian diplomat Staffan de Mistura as a new mediator for Syria, after his predecessor resigned in frustration over the ineffectiveness of international attempts to resolve the conflict. As fighting between disparate groups, as well as rebel and government forces, intensifies, to say de Mistura has his work cut would be an understatement.

So this week was marked by not only violence, but also increased fragmentation and complication in Syria's civil war. This is the time for the international community to increase, rather than decrease, focus on Syria. This civil war is only intensifying, and with it uncertainty over the future of the Middle East.