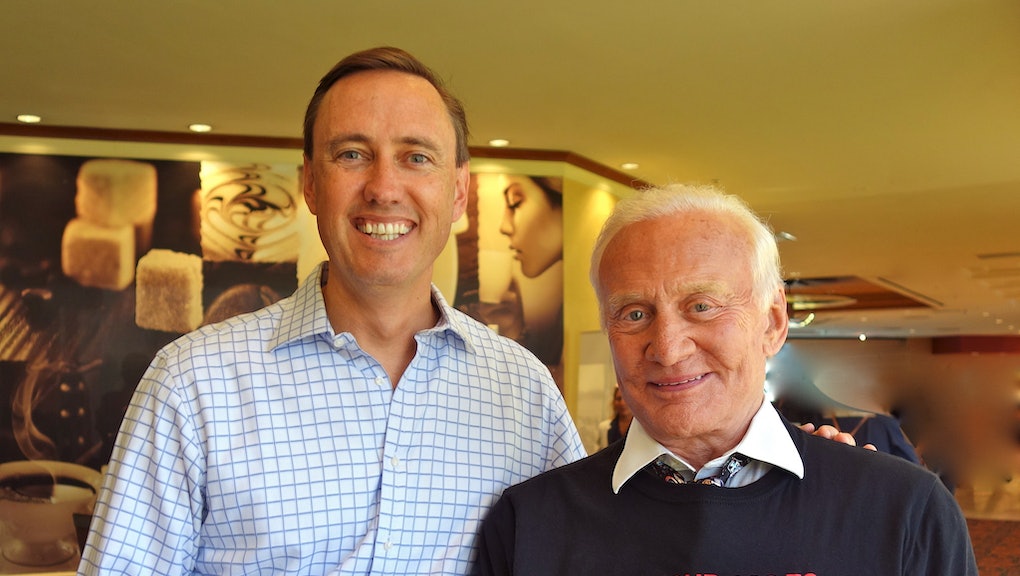 Buzz Aldrin Has a Bold Message for NASA

Remember the days when space exploration was adventurous and exciting? Buzz Aldrin remembers.

In case it wasn't clear from his t-shirt, the second man to ever walk on the Moon wants NASA to take people to Mars. Not just for a survey trip, either — a full-blown settlement.

"A permanent Mars base should be the most important goal of the U.S. space program," Aldrin said during NewSpace 2014 this week.

If we commit, Aldrin, former astronaut and the second person to walk on the Moon, said during an Q&A session on Facebook, we could be able to get there in the next 25 years.

"In 2009, my submission to the Augustine Commission of United Space Vision had the US leading internationals with landing on Mars in 2031," he wrote. "I believe it may take us until just before 2040 which is just two decades from the anniversary of landing on the moon."

Changes at NASA: While the agency has certainly not been ignoring Mars (ain't that right, Curiosity?) priority shifts and budget cuts have made the kind of groundbreaking manned missions that astronauts like Aldrin embarked on seem like a thing of the past.

Moon missions may be out entirely, with NASA chief Charles Bolden saying last year, "NASA will not take the lead on a human lunar mission ... NASA is not going to the moon with a human as a primary project probably in my lifetime. And the reason is, we can only do so many things."

Mars is one of those things (though not before asteroid exploration). But a 25-year plan is difficult to kick off without funding, and between sequestration and other belt-tightening measures over the past few years that's become a difficult proposition.

NASA's $17.5 million budget request this year is a $185 million cut from what the agency received last year. The Planetary Science Division, which would handle exploration, is looking at a potential $65 million cut as well.

Show me the money: Aldrin maintains that getting to Mars is about more than just money, though. In a Q&A response, he wrote that more funding can be secured "by having the American people realize that they indeed want America to lead in essential space transportation capabilities. We are innovators because of the freedoms we enjoy ... that is our strong-suit."

He advocated using 1% of discretionary funds a year to fund a Mars occupation mission. He met with President Obama earlier this week, so maybe his pitch paid off. After all, would you say no to this man?