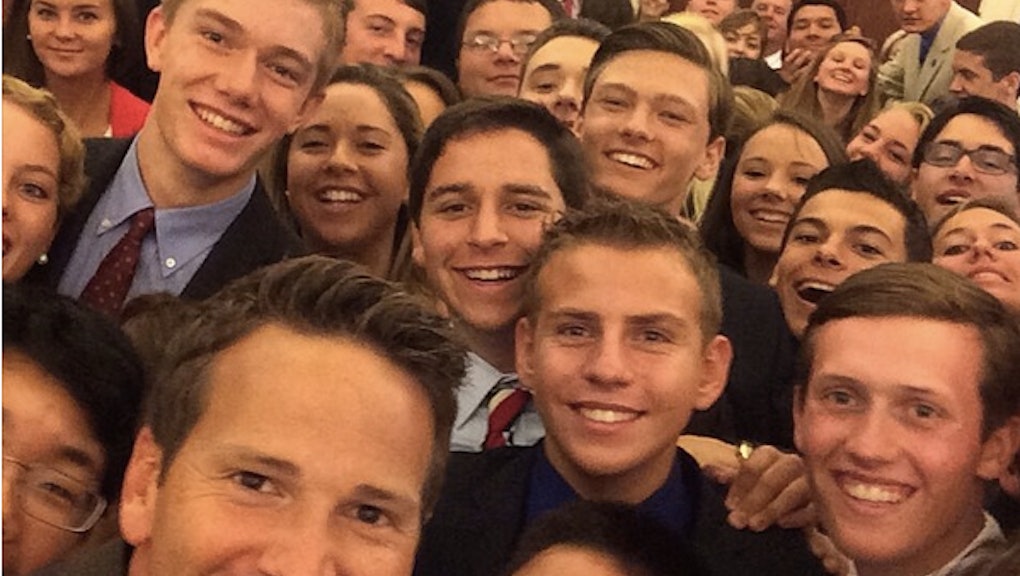 What do you notice about this photo?

How about the fact that it's overwhelmingly white?

This instagram was taken by Rep. Aaron Schock (R-Ill.) after speaking to the National Teen Age Republicans, or "#futuregop." If that future party looks anything like the current party, though, Republicans would likely be in big trouble.

You can't glean the racial identities of a whole room just by looking at their faces, of course, but it's a telling sample. And a changing electorate — and sweeping victories by Democrats when it comes to minority voters — means GOP youth outreach will have to stray from its white base if it's going to have any chance winning an election, let alone actually representing Americans.

The numbers: President Obama lost the white vote badly in 2012, getting only 39% compared to Romney's 59%. But whites made up less than than three-quarters of the electorate; that's compared to 88% in Reagan's first election and 81% for George W. Bush's. It's been a steady downward trend as minorities make up more and more voters.

Hispanic, black and Asian Americans, meanwhile, voted 80% in favor of Obama. And those voters will continue to increase in number — Pew estimates that Hispanics will make up 29% of the U.S. population by 2050, up from 17% now, while Asian Americans will make up 9%, up from 5%. Those white voters that Republicans pinned their hopes on in 2012 will be down to about half the population.

Self-assessment: If you don't trust the demographic data, you can take Republicans' word for it. After the 2012 loss, the College Republican National Committee put out a report about how the GOP could get young voters on its side.

When they tried word association, "the responses were brutal: closed-minded, racist, rigid, old-fashioned." And when it came to young Latino voters, the study found that they "tend to think the GOP couldn't care less about them."

The message wasn't lost on Republican leadership either. "The nation's demographic changes add to the urgency of recognizing how precarious our position has become," RNC chairman Reince Priebus said following the 2012 loss. "Unless the RNC gets serious about tackling this problem, we will lose future elections; the data demonstrates this."

If Republicans can find a way to fix this, future Instagram shots will have a lot more nonwhite faces. And if they can't? They might not see many national election wins for a long, long time.