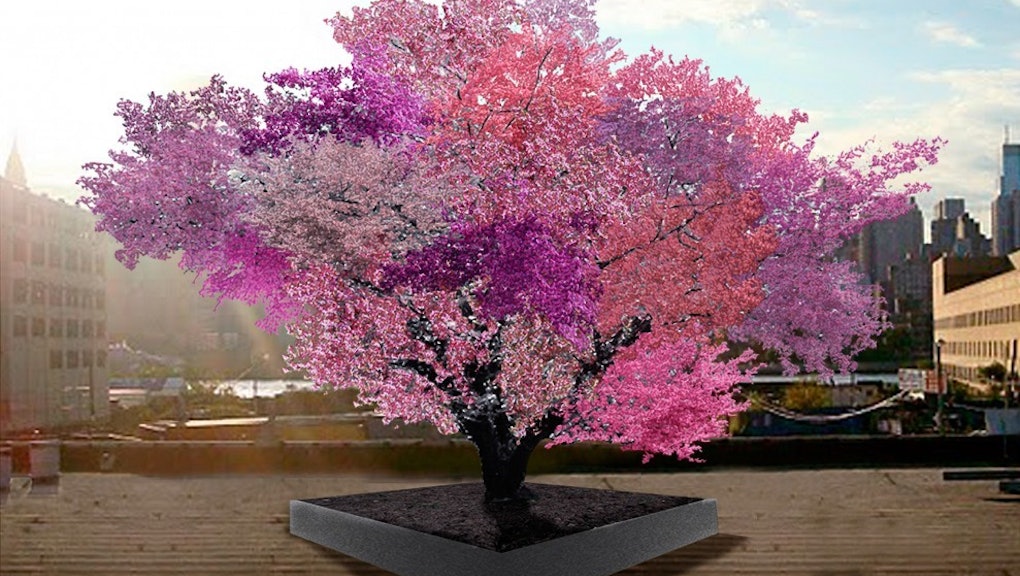 This Purple Tree May Solve One of the World's Deadliest Epidemics

According to the non-profit organization Feeding America, 49 million Americans lived in food insecure households in 2012 and roughly 14.5% of households were food insecure. Of those, about 15.9 million children under 18 live day-to-day not sure where their next meal is coming from, and when they do have food, it's often not healthy or nutritious. The problem stems from a few sources, including food deserts and insufficient welfare programs.

But what if there was a way to just grow a whole bunch of fruits on one big tree? And not just one fruit, but two or three different kinds?

Or what about 40? That's the idea Syracuse University sculptor Sam Van Aken had when he began his Tree of 40 Fruit project several years ago. Instead of having 40 trees for 40 different fruits, what about just one tree that can grow 40 distinct fruits on its branches and look absolutely amazing in the process?

For most of the year, the Tree of 40 Fruit looks fairly plain and green. But in the spring, the tree blossoms into an explosion of pinks, whites, crimsons and purples. Then from July through October, it produces 40 different types of stone fruit: apricots, cherries, nectarines, peaches, plums and, hopefully soon, almonds.

On his website, Van Aken described the Tree of 40 Fruit as an "ongoing series of hybridized fruit trees" that was sculpted through the process of grafting and "primarily composed of native and antique varieties," making them "a form of conversation, preserving heirloom stone fruit varieties that are not commercially produced or available."

Edible art: But this isn't just slapping together a few branches and calling it a day — Van Aken is an artist, after all. By mapping out a comprehensive time line of the various fruits' blossomings, Van Aken can essentially design and sculpt the trees to make them both as beautiful and efficient as possible.

"First and foremost I see the tree as an artwork ... I want the tree to interrupt and transform the everyday," he told Epicurious. "When the tree unexpectedly blossoms in different colors, or you see these different types of fruit hanging from its branches, it not only changes the way you look at it, but it changes the way you perceive [things] in general."

"By grafting these different varieties onto the tree in a certain order I can essentially sculpt how the tree is to blossom," Van Aken continued. "I've been told by people that have [a tree] at their home that it provides the perfect amount and perfect variety of fruit."

Oh so delicious: This also wasn't just some sort of competition or race to 40 fruits. Van Aken carefully considered factors like how long the fruits will keep, their size, how they look and how they taste, all in order to ensure he's producing fruit that people will actually want to eat.

By sourcing several of his fruits and seedlings from an orchard at the New York State Agricultural Experiment Station, Van Aken is working with very natural, un-chemically-compromised and sometimes historic, heirloom fruits that can naturally grow together without interbreeding and creating one new super-mutant fruit (although, that would be pretty cool too).

Around the country: So far Van Aken has produced 16 Trees of 40 Fruit, each taking about five years to cultivate and sculpt, and dispersed them around various parts of the country (mostly in the Northeast) in climates that are suited to its growth.

For the first few years of their growth, each Tree of 40 Fruit won't necessarily be the stunning explosion of color Van Aken's renderings have promised, but that's just a matter of time and growth. In the meantime though, the fruit produced does look fairly delicious.

A worldwide problem: For now, Van Aken's kept his focus on the United States, but there's no reason why Trees of 40 Fruit couldn't be cultivated and developed in other parts of the world with suitable climates. According to the World Food Programme, roughly 842 million people around the globe do not have enough to eat and because of that, hunger kills more people every year than AIDS, malaria and tuberculosis combined. It's an extremely complicated issue with innumerable contributing factors. But when this many people are dying, any progress is good progress and the more healthy food there is available in more parts of the world, the better off we'll all be.