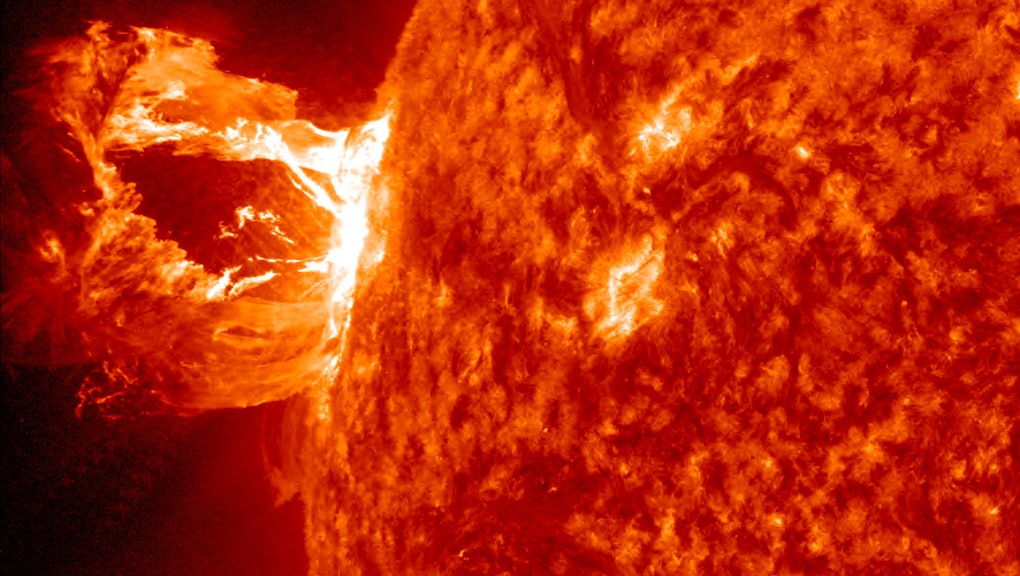 The news: According to a new report from NASA, the Earth narrowly escaped a perilous solar storm that could have knocked "modern civilization back to the 18th century."

On July 23, 2012, two giant plasma clouds, known as coronal mass ejections (CMEs) erupted from the sun creating an epic solar storm. As luck would have it, the CMEs weren't directed at the Earth, but if it had happened one week earlier the point of eruption would have been Earth-facing and would have resulted in trillions of dollars of damage to the planet, mostly due to the widespread blackouts, damage to satellites and general interruption of and damage to various electrical systems on Earth.

"Analysts believe that a direct hit by an extreme CME such as the one that missed Earth in July 2012 could cause widespread power blackouts, disabling everything that plugs into a wall socket. Most people wouldn't even be able to flush their toilet because urban water supplies largely rely on electric pumps."

The worst part is that if you think we were lucky and got off scot-free, you'd be dead wrong. Physicist Pete Riley of Predictive Science Inc. reported that there is a 12% chance of a massive devastating solar storm headed our way in the next 10 years.

Would it really have been that bad? Yes. For comparison, in 1859, there was the Carrington solar storm, where a series of powerful CMEs hit Earth head on. The storm, named for astronomer Richard Carrington who observed the storm first-hand, "caused global telegraph lines to spark, setting fire to some telegraph offices and thus disabling the 'Victorian Internet,'" NASA said.

The close-call storm of 2012 is similar to the Carrington-event. But the collateral damage to the modern world would potentially surpass the clean-up of the 1859 storm.

"A similar storm today could have a catastrophic effect. According to a study by the National Academy of Sciences, the total economic impact could exceed $2 trillion or 20 times greater than the costs of a Hurricane Katrina. Multi-ton transformers damaged by such a storm might take years to repair."

So are we prepared if a solar storm heads toward Earth? No. The likelihood of this happening in the next decade is at 12%. But that doesn't mean we have enlisted safety precautions. "Initially, I was quite surprised that the odds were so high, but the statistics appear to be correct," according to Riley. "It is a sobering figure."

The implications of how ill-prepared we are, are cataclysmic when you consider Washington Post contributor, who has a meteorology Ph.D., Steve Tracton's claims that unequivocally we are not ready for a space storm of historic proportions. After attending a Space Weather forum in 2012, Tracton noted that experts advise heading to areas of the country not affected by the storm, if they exist, to find refuge.

If that's the only escape from an enormous solar storm, then the Earth will be up a stream without a paddle. Hopefully, now that NASA is releasing more information on Earth's fortunate close-call, we can better prepare for future Earth impacts from space storms.