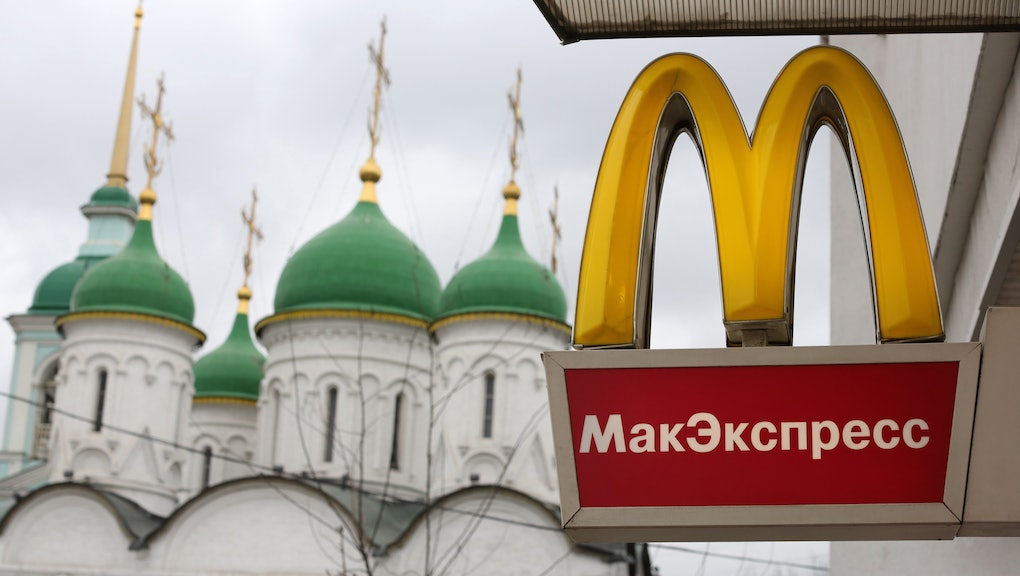 The news: Many McDonald's items might soon be sued off the menu in Russia, where the nation's Rospotrebnadzor consumer protection agency is taking the fast food chain to court over the unhealthiness of its signature burgers, among other items.

"The calculation of nutritional information is carried out based on the methodology approved by the Food Institute of the Russian Federation," McDonald's responded in a statement.

The background: Russian authorities are playing this up as a big win for public health and, to be sure, McDonald's is really unhealthy. But there's a good chance this has less to do with the food than who's making it.

There's nothing to tie the pending lawsuit against the Golden Arches with increased tensions between Russia and the West, but the consumer protection agency's actions have a history of conforming to Russia's political agenda. Amid conflict with Ukraine, Rospotrebnadzor banned the import of chocolate made by new Ukrainian president Petro Poroshenko's company Roshen.

Russia's ultranationalists got very angry when McDonald's decided to close its locations in the Crimean peninsula after Russia annexed it earlier this year, making the timing pretty suspicious. The company that moved into the abandoned restaurants, RusBurger, claims that its burgers are much better than ones made by Americans. Whether or not they actually are is besides the point, though if the sandwiches are as ridiculous as their advertising then maybe McDonald's has a fight on their hands:

Why you should care: It's hard to feel bad for McDonald's, which markets fattening fried food to children while pretending to help them. (One study in 2013 complained that the company's toy giveaways and movie tie-ins are undeniably one of the chain's biggest tactics for luring kids inside.) While U.S. obesity rates are finally leveling off, other research has shown that up to 42% of the United States' obese kids don't even realize they're overweight. Frankly, bad news for McDonald's is probably good news for public health. American politicians have done almost nothing about it, probably because the company spends huge amounts of money on lobbying.

There are 424 McDonald's locations in Russia, which have largely shored up profits for the company amidst lackluster sales almost everywhere else. A blow to McDonald's in Russia would be a major problem.

Ultimately, though, this probably has more to do with geopolitics than Russian waistlines. Some Russian politicians have even announced they want to ban McDonald's entirely and recent polls suggest that as many as 62% of Russians agree. In 2012, Chief Sanitary Inspector Gennady Onishchenko told the public that "I remind our citizens that burgers, even without worms, aren't a sensible dietary choice for the population of Moscow and Russia. This is not our food."