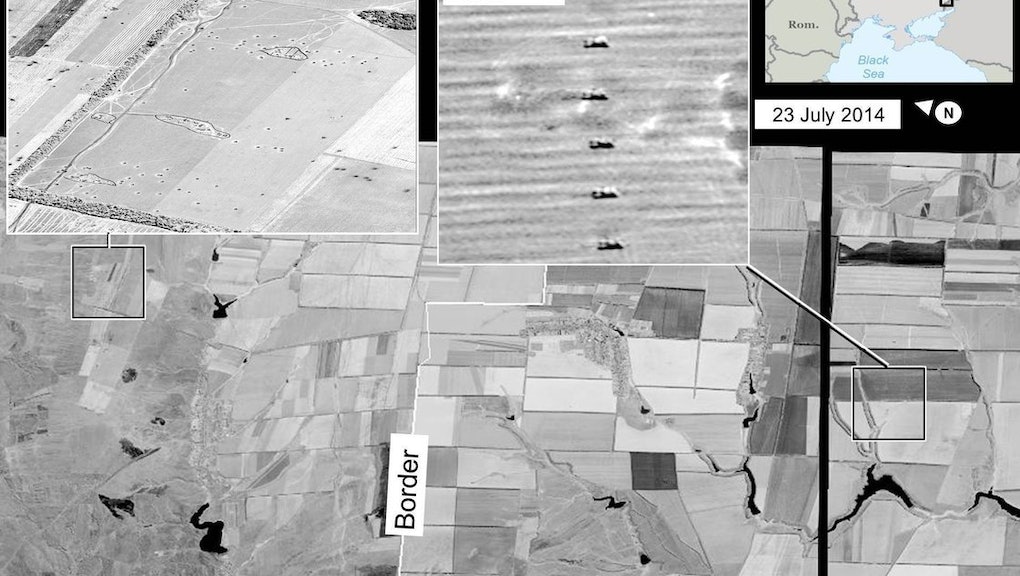 There's Been a Major Revelation in the Russia-Ukraine Crisis

The news: The Department of State has released photographs it believes show Russian military forces launching rockets into eastern Ukraine. The new evidence purports to confirm American claims that Russian artillery was being fired across the border at the Ukrainian military, thus strongly suggesting that, despite official denials, Russia is now an active participant in the conflict.

Here's some of the evidence:

The report asserts that "self-propelled artillery only found in Russian military units, on the Russian side of the border, oriented in the direction of a Ukrainian military unit within Ukraine." It also argues that "Russia-backed separatists have used heavy artillery, provided by Russia, in attacks on Ukrainian forces from inside Ukraine." Just as recently, Ukraine believes that Russian units shot down two Ukrainian Su-25 jets flying near the MH17 wreckage.

Why this is big news: If the evidence is as solid as the State Department claims, it more or less demonstrates that Russian authorities are not only lying about their degree of support for separatist insurgents widely believed to have shot down the MH17 civilian airliner earlier this month; they've also been part of the shooting war. It also indicates that Putin's Russia has been actively fueling the conflict at the same time the world community would really like it to calm down.

The Russian Defense Ministry, for its part, points just as readily to a Ukrainian military buildup in the eastern part of the country and says that similar inspections would reveal that Ukrainian forces have done the same, killing and injuring Russian citizens. They're probably right, but little evidence exists of deliberate actions anywhere near the scale of Russian ones. Other official Russian challenges to Washington's narrative have also seemed lackluster as well.

Either way, world leaders will undoubtedly view an affirmation of Russian military involvement as an intolerable escalation of an already severe threat to regional stability.

Why you should care: The stakes just got a lot higher, and yet Russia isn't flinching. Pando's Gary Brecher wrote earlier this year about how such blatant Russian defiance of Western ultimatums was making Western war hawks like Sen. John McCain (R-Ariz.) pretty livid. That was before the rise of the rebellion in eastern Ukraine and the senseless slaughter of everyone onboard MH17. Now they're going to be downright furious.

Tougher sanctions are becoming a given and Deputy National Security Adviser Ben Rhodes told CNN's State of the Union that he was "confident there's going to be strong action." People like McCain, who recently called the U.S. "cowardly" for not arming Ukraine against the Russians, are going to press their case even harder.

But it's ultimately questionable whether tough talk and sanctions will do anything to change the course of the war in eastern Ukraine, and the new evidence doesn't change the fact that the West has few good options. Moreover, policymakers should wait for a stronger case instead of rushing to do something regrettable.