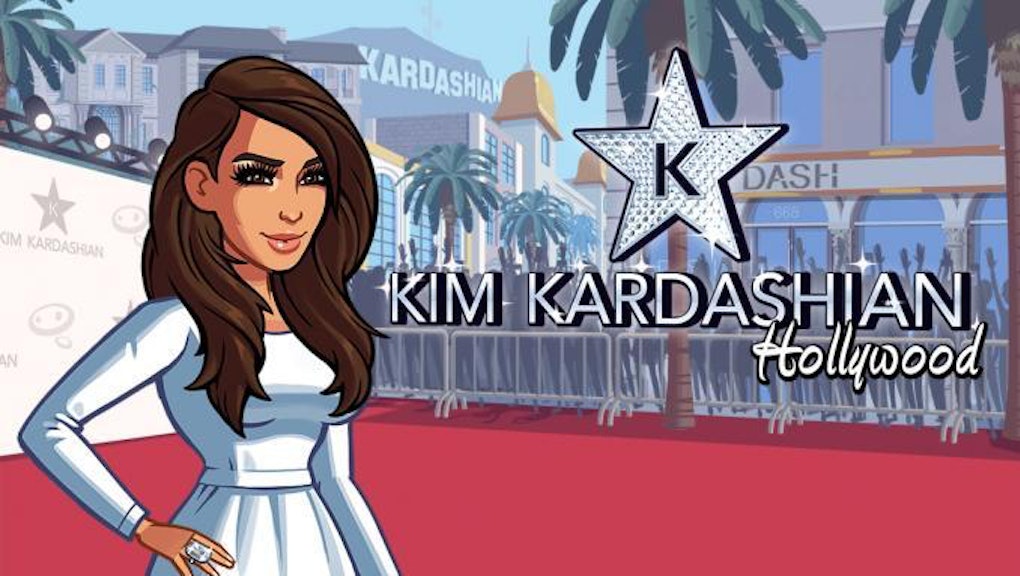 "Kim Kardashian: Hollywood," the mobile game created by the reality star and gaming company Glu Mobile, is projected to gross $200 million this quarter, with $85 million expected to pad Kardashian's luxuriously lined pockets. For a celebrity video game built around climbing social ladders (moving from the E-list to the A-list), that number is mind boggling but it also proves something we've reluctantly known all along about the most famous Kardashian.

Launched in June, the game has spent the summer becoming immensely popular. It currently receives an estimated 100,000 new downloads per day — holding the No. 4 spot on Apple's App Store — and has launched endless social media chatter about just how addictive it is. As much as we all love to hate Kim K. (or hate to love her), "Hollywood" brings to light a truth that many of us only begrudgingly admit: Kardashian is not a flash in the pan, a silly party staple or a mere reality star — she is one of the most important celebrity figures of our time and is the face of one of the most brilliantly savvy businesses out there. The business of Kim Kardashian.

Last week, the game's popularity seemed to reach online fever pitch as the Internet went into a frenzy analyzing the popularity of "Kim Kardashian: Hollywood." The Washington Post asked, "How does Kim Kardashian ... even succeed when it comes to iPhone apps?" The A.V. Club called it "a brilliant guide to fame," and Forbes posted a Quora response that thoroughly illustrates the game's acquisition and monetization strategy. The frenzied interest in the game likely has more to do with the brilliant guide to fame element than it does with monetization strategy, but it's also the mark of Kardashian's edgy, surprising and smart steps through the business that is celebrity.

When Kardashian began promoting "Hollywood" on Twitter and Instagram earlier this year, it seemed a little absurd. But $85 million later, it's clear that Kardashian shows the kind of shameless branding savvy that most celebrities wouldn't dare admit to. Indeed, Kardashian's million-dollar partnership with Glu Mobile has the potential to turn celebrity-designed mobile games into the new celebrity perfume.

The game, of course, capitalizes on Kardashian's rapid ascent to fame. Its dopamine rush is not in harvesting carrots or lining up candies but in attaining social recognition through self-promotion. And for those who are simply obsessed with Kardashian herself, her avatar looks eerily like her, giving fanatics even more opportunities to idolize her cartoonish perfection.

Kardashian is a brand that sells. But the genius of Kardashian's celebrity is that she fully embraces the business of exploitation. She is the brand and the brand is her.

In the process of becoming a branding empire, she (and her family) have transformed the industry's idea of what is acceptable for a celebrity. Where reality TV was once considered an arena for wannabes and pseudo-celebs, it now hosts a lengthy red carpet of noteworthy celebrities. Kardashian has recorded songs, run a clothing line, been featured in films and television shows, modeled ... the list goes on.

Kim Kardashian has essentially perfected the art of the celebrity brand, and that's not a feat that should go undermined. It is a business endeavour, and it's a business that she is pretty darn good at. It's not easy to remain in the spotlight for as long as she has. She is someone who you just can't look away from.

"Kim Kardashian: Hollywood" takes the entire celebrity experience one step further, by becoming Kardashian's very own form of satire. The game takes her controversial rise to fame and turns the joke on us, the hundreds of thousands of users who are forking over money to be just like Kim (at least virtually). We may mock her fame, but when given the opportunity to experience a bit of it virtually, $200 million proves we're just as keen as Kim to jump in on the action.