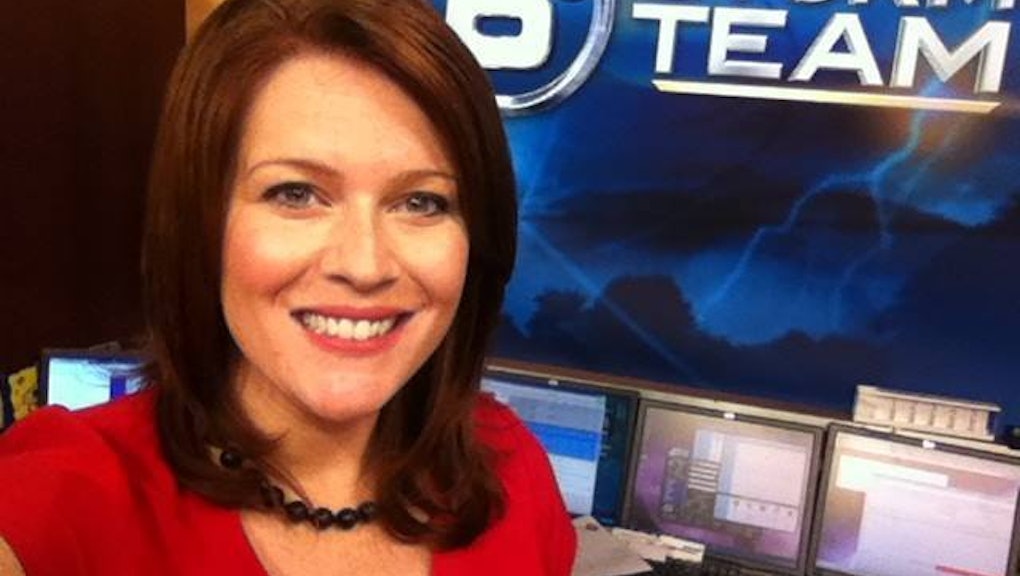 A Meteorologist Destroys a Sexist Viewer Who Complained About Her Boobs

From failing to predict a rain shower to misjudging an impending amount of snow, people may get annoyed with their local meteorologists for plenty of reasons. Having boobs generally is not one of them.

Nevertheless, a Tennessee viewer recently wrote a letter of complaint to Knoxville weatherwoman Julya Johnson after getting too distracted by her lady parts to notice her weather forecast.

"Please change your appearance!!," the viewer urged Johnson. "Those high Bodice dresses are Not (for) you. Do you Have any dress or dresses that don't fit snugly under your (Bust)? Please! You are Beautiful — But you need a change."

Don't let the cheerfully backhanded compliments fool you — this is nothing but sexist condescension.

The letter in full reads (all sic):

Hello Julia, You are a great meterologist! I am at elderly person who depends on WATE 6 News for my daily news and weather — my daily beginnings — I watch this news from 2 a.m. — thru the day. I observed every one gets great compliments about their job, How they give great forecast.

There are not any compliments about you! Why? Please change your appearance!! Those high Bodice dresses are Not (for) you. Do you Have any dress or dresses that don't fit snugly under your (Bust)? Please! You are Beautiful – But you need a change. Please don't feel like I'm putting you down. Allow me to apologize. This letter is meant for the beautiful lady you are. Go forward (Be happy!)

Johnson wasn't impressed by the alleged fan's wish that she change her attire in order to become "the beautiful lady" she was meant to be.

In an immensely satisfying response posted on her Facebook page, Johnson took the viewer to task [emphasis ours]:

So, it's not fun to wake up to things like this. No return address was left, so I'll address it here. I will never, ever be able to please everyone with my appearance. It's not possible. I have tried for 12 years on-air to do that. I have 'changed my appearance' to try to please people before. It never works. So, I please myself. I like my dresses. I feel good about my appearance. ... Does the fact that I bring an accurate forecast mean nothing? I was a straight A student.

If I had known being on People's list of 'best dressed' mattered more than an accurate forecast, I could've saved a ton of money on that meteorology degree.

Don't do this, people. Just don't. It's very rude. That's my opinion, and it is as valuable as anyone else's opinion.

Johnson's note is pretty near perfect. For one thing, women are allowed to wear what they want. Really. The fact that Johnson's outfits make her feel confident is far more important than a viewer's inability to focus on her forecast instead of her "bust."

It's also important to remember that women's bodies do not become fair game for criticism solely by virtue of their being in public. Unfortunately, it's clear that some strangers still feel entitled to evaluate successful women's appearances, often at the expense of recognizing their unrelated accomplishments.

The good news? More and more women in the public eye are using their platforms to speak out against this kind of sexist behavior.

Earlier this year, comedian Sarah Millican offered up her own beautifully-worded response to red carpet critics who chose to mock her weight and dress at the BAFTAs. "I'm sorry," Millican wrote in an op-ed for Radio Times. "I thought I had been invited to such an illustrious event because I am good at my job."

And back in 2012, Wisconsin news anchor Jennifer Livingston delivered a scathing anti-bullying monologue on air, directed at a male viewer who'd written to say she was too fat to be a "suitable example" for girls in the audience. "[Y]ou know nothing about me but what you see on the outside, and I am much more than a number on a scale," Livingston said.

These responses go viral for a reason. The near-constant evaluation of women's looks is often accepted as normal, even though this treatment is just another way to police their bodies and bring successful women down a peg. It's gratifying every time we get to see it called out as the sexist tripe it really is.

To quote Johnson, "Don't do this, people. Just don't."