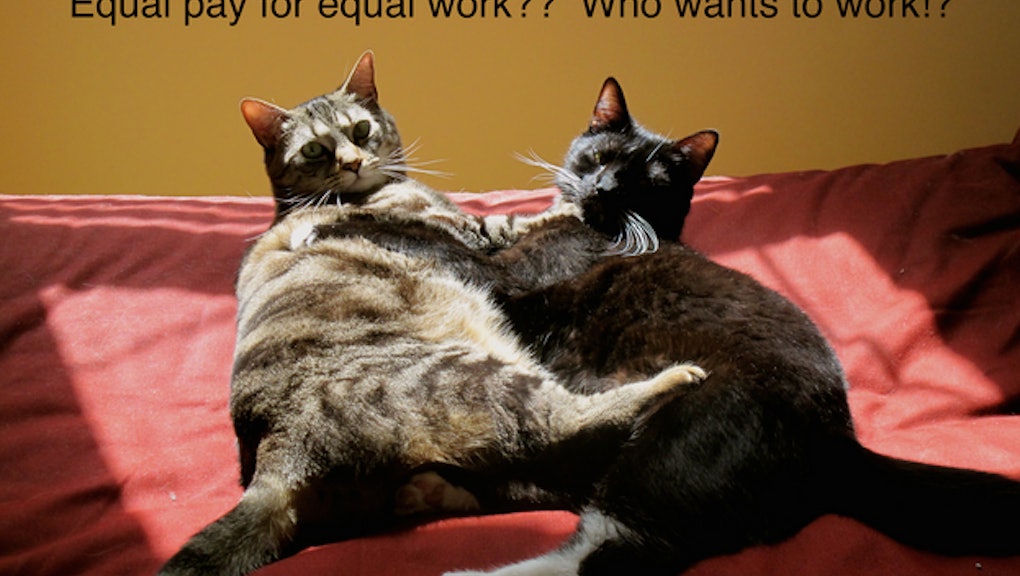 A new phenomenon in the Tumblr Wars has brought the claws out, literally and figuratively.

In this latest example, satirical Tumblr "Confused Cats Against Feminism" is combining some of the Internet's favorite things — cats and whimsy — in a hilariously effective takedown of its inspiration, "Women Against Feminism."

"Women Against Feminism," which only recently arrived, is an utterly baffling site committed to taking ignorant rhetoric to a whole new level of confusion. With oddly little concern for traditional spelling, grammar and basic language usage rules, women have been using the Tumblr to post placards describing why they apparently don't need feminism. Take this gem:

At the very least, this Tumblr proves that feminism is still needed, because feminists, not these illiterate "anti-feminists," need to shape our narrative.

Let's be clear: Feminism is the legal equality of all genders. Period. This definition is simple, understandable and reflective of what I'm calling feminism's "fourth wave," when the movement has rightfully and ethically incorporated trans women. This definition, too, highlights the importance of creating equality in the realm of law. Difference does not mean "less than" here; it simply means difference.

That these young women, mostly white, for the record, seem to believe that feminism is the un-equalizing of men under the law. Besides running contrary to the actual definition of feminism, this viewpoint is a repercussion of how feminists lost control of their narrative after the failure of the Equal Rights Amendment in the 1970s and early 1980s.

These young women were led astray, and they are sadly not alone. The idea that one can believe in equal rights but be conflicted about being called a feminist speaks to the lingering confusion about what the term actually means as well as the negative connotations feminism as a label has been unable to shake over the last 40 years.

Perhaps the kitties can be more effective in communicating to these women: