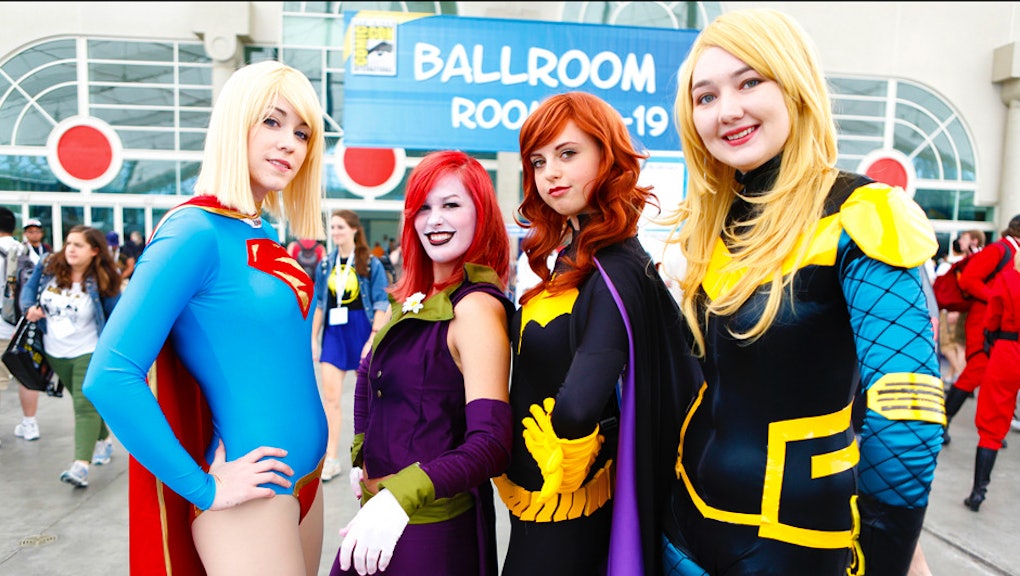 The Biggest Comics Event of the Year Has a Disgusting Problem

These are the realities many female Comic-Con San Diego attendees face, according to an Associated Press report. Incidents include upskirting and unwanted touching, and even high-profile female authors aren’t immune from such harassment. It has become so common at the massive fantasy event that there’s a phrase to describe it: Creeping at a con.

In response, Geeks for CONsent, an organization started by three women, has launched a Change.org petition to stop sexual harrassment at the festival and launch an official anti-harassment policy.

"It's very much connected [to the larger problem of sexual assault] and it's the same phenomena, but manifesting a little more sexually vulgar in the comic space," Rochelle Keyhan, director for Geeks for CONsent, told the AP.

The background: Comic-Con San Diego (CCSD) is the largest comic convention in the world, and is renowned for its use of cosplaying, or costuming. Much of it is scantily-clad, which it has invited problems for female attendees.

But the problem goes beyond San Diego. The petition has collected stories from women at various conventions:

One woman at New York Comic-Con reported that a man grabbed her breast while taking a picture with her. Another woman who likes to cosplay as Chun Li from Street Fighter says she’s considered dropping the character because men keep demanding she do a “flying bird kick” (upside-down splits) for photos.

Geeks for CONsent say they’re targeting CCSD because it’s the largest festival, and hence has the potential biggest impact; if they adopt an anti-harassment policy, it’s likely other conventions will as well.

A spokesman for Comic-Con told the LA Times, “The safety of our attendees is a primary concern of ours.” But Geeks for CONsent say this means nothing: “Glanzer’s response makes it clear that they care more about press and publicity than making the largest convention in the world a safe, inclusive space,” they wrote.

Cosplaying is a celebrated aspect of Comic-Cons, and it shouldn’t disappear. But it also shouldn’t be used as an excuse to sexually harass those who decide to participate.

Cosplaying is done by both women and men, and it’s not just the women who are dressed suggestively. But women, it seems, are the primary targets for cat-calling, groping and harassment. This is a trend Geeks for CONsent desperately hopes to reverse.