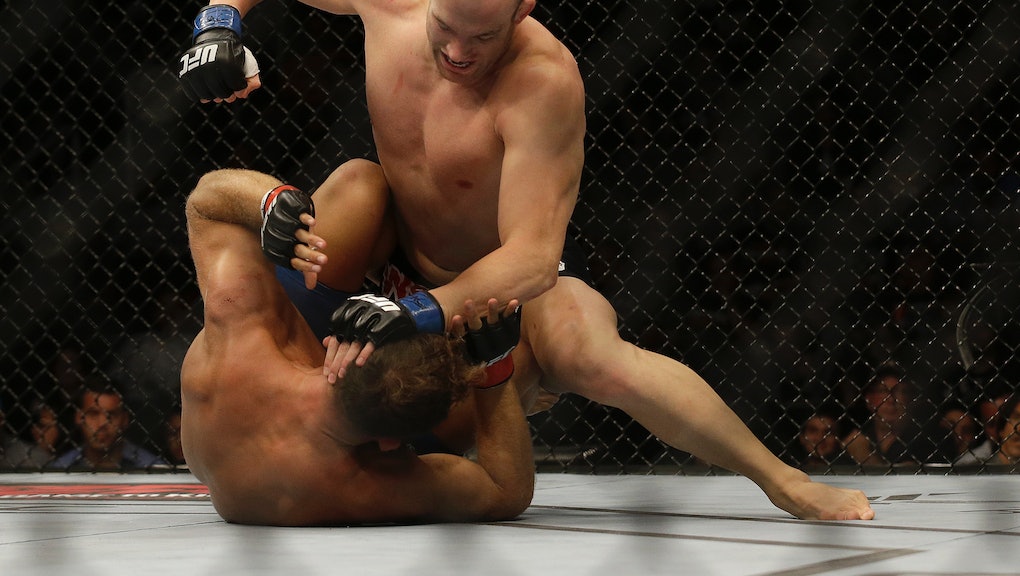 This MMA Fighter's Stand for Gay Rights Is Unexptected — And Hilarious

Ultimate fighters are known for being the toughest of the tough. But that doesn't mean they can't get a little cheeky when equality is on the line.

Just before he retired, dynamic mixed martial artist Kyle Kingsbury issued a statement that would resonate much longer than his last bout against Patrick Cummins. As he stepped up to the scales last Friday for the ritualistic weigh-in, the hulky Kingsbury, sporting a new beard and a fanny pack, revealed a pair of skimpy "Legalize Gay" underwear.

It was a momentous fight for Kingsbury, even before he took off his pants. The 32-year-old fighter, a cast member on The Ultimate Fighter 8, had returned to the ring after a two-year absence during which he traveled the world, got a fireman certification, ran and won marathons and got engaged to his MMA ring girl girlfriend Natasha Wicks.

Kingsbury's comeback was short-lived, but his classy gesture created a surge of goodwill amid fans, especially in the LGBT community.

Clearly it's possible to be a macho athlete in a power sport and support GBT equality. This sentiment also apparent in the recent WWE NoH8 campaign, which tackled homophobic stereotypes in the equally-macho professional wrestling community.

After baring his underwear, Kingsbury showed his love for Arizona State University, where he played football, by making the pitchfork symbol with his hand.

Following the fight, a landslide unanimous decision (30-27, 30-25, 30-24) in three rounds, the light heavyweight UFC fighter announced his retirement in San Jose, Calif., the city where he first played high school football. "That was definitely my last fight. I told everyone I didn’t want to be a .500 fighter and so enough was enough. It didn’t make sense to get beat up anymore," Kingsbury said.

Elaborating late on Twitter, Kingsbury noted that his career "felt like peaks and valleys but in the end I am completely grateful for it all - every beating I delt out & every beating I took." He added, "I've learned more about life in the small window I've fought than in any other venture. Life only continues to get better. I love you all :)"

At the very least, the now-retired fighter seems to be getting a lot of (well-deserved) love back, at least on social media.

So what's next for the strongman? Kingsbury may just be in for a call from Hudson Taylor, wrestling coach and founder of Athlete Ally, the country's biggest support group of athlete ambassadors for equality.