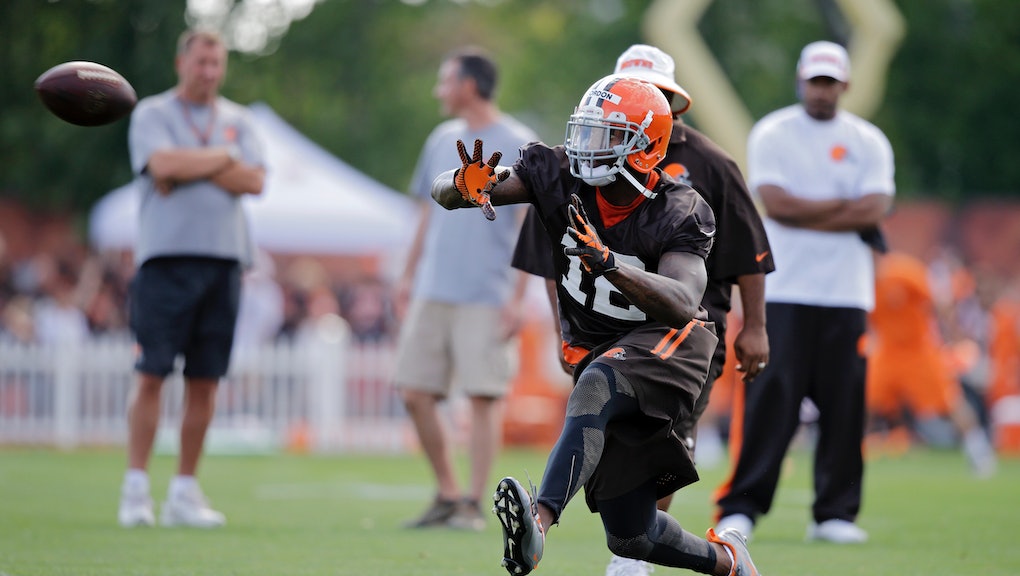 The news: In what may be the most egregious example of double standards in sports, the NFL is planning to ban Cleveland Browns wide receiver Josh Gordon for an entire season after he tested positive for marijuana within nanograms of the league limit.

Meanwhile, Baltimore Ravens running back Ray Rice will reportedly face just a two game suspension after he was caught on tape knocking his wife unconscious and dragging her out of an elevator.

How exactly does that work?

The double standard is jaw-dropping. News of Gordon's unjust punishment has understandably sparked outrage across the internet. While the continues to deflect criticism for going too easy on Rice, they're about to penalize Gordon for a far lesser infraction (though he's planning on appealing his punishment, arguing that secondhand smoke caused the tiny amount of THC to show up in his urine test).

The NFL has stated in the past that it will make its marijuana policy more lenient, but its implementation has been mired in internal disputes. Nothing will happen in time to allow Josh Gordon to play next season.

Why things need to change. This debacle points not only to a flawed measure of penalization in the league, but also to its unnecessary sanctions against players using cannabis, especially when it could actually help them. In February 2014, then-Steelers safety Ryan Clark told ESPN that many players use marijuana medically for pain and stress relief as an alternative to harsh pharmaceuticals. He echoed this view on Twitter.

Football is a physically traumatic sport, and the anti-inflammatory and neuro-protectant qualities of some cannabinoids could treat a number of players dealing with injuries on a regular basis. NFL commissioner Roger Goodell said he's open to the idea of medical marijuana for NFL players, but he's a long way from actually doing something about it.

The wrong target: In the meantime, Josh Gordon — an athlete who set an NFL record last season by catching 498 yards over two consecutive games — will be shut out for an entire season in the midst of his prime, all for a few nanograms of THC in his urine.

Fans are taking to social media to vent their outrage, which is mostly focused on the disparity between Rice and Gordon's penalties.

If you're as outraged by the disparity as me, use the #LetGordonPlay hashtag to show your support for Gordon on Twitter. If there's enough support, the NFL might be swayed to let Gordon off the hook.