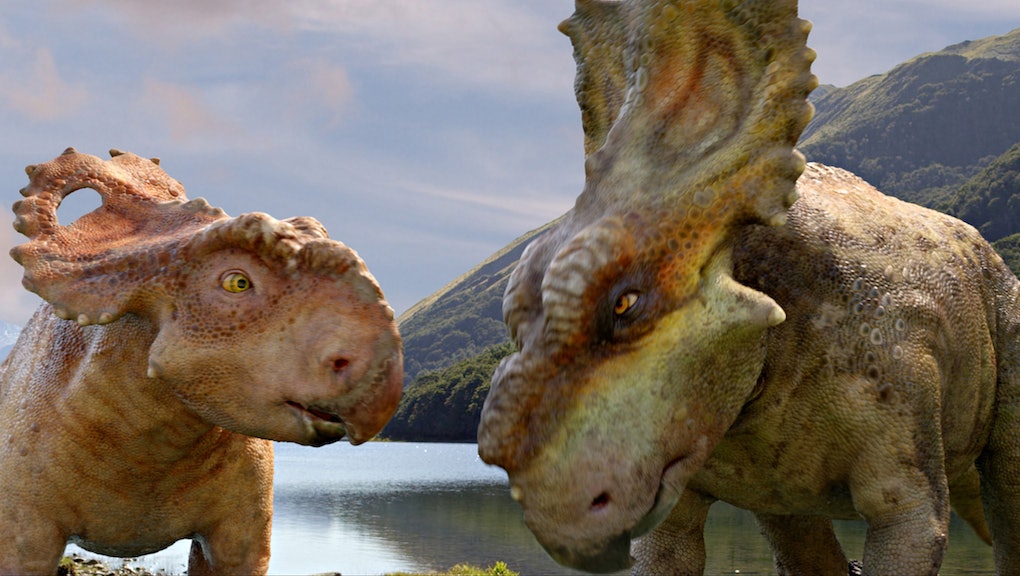 There's One Key Thing That Killed Off All The Dinosaurs

Colossal bad luck. If the asteroid strike that drove them extinct had arrived just slightly earlier or later, the massive animals might have survived.

When the 6-mile-wide asteroid hit the area which is now Mexico some 66 million years ago, the dinosaurs just happened to be in the middle of a period of abnormal environmental stress, making them especially vulnerable to outside threats.

At the time of the asteroid crash, our planet was experiencing environmental tumult on a scale that hasn’t been seen for millions of years — volcanoes across the landscape spewed lava over the Earth, sea levels were rising and falling dramatically and temperatures were shifting from icy cold to scalding. These changes made life on the planet difficult, to say the least. With the demise of many plants and animals, the global food chain became frail. The dinosaurs, the largest plant-eaters around, were acutely affected by the shortage of fauna.

"Not only did a giant asteroid strike, but it happened at the worst possible time,” Steve Brusatte of the University of Edinburgh's School of Geosciences, said in a statement.

The asteroid crash thus acted as the final straw — wiping out the various species of giant reptile that dominated our planet for 135 million years.  If the asteroid had hit just a few million years earlier, Brusatte said, the dinosaurs might have had a fighting chance.

“This impact was the smoking gun for the cause of the extinction,” study co-author Paul Barrett told The Guardian. The research will appear in the August edition of Biological Reviews.

When it collided with Earth, the giant asteroid unleashed a chain reaction of environmental disasters that ravaged the planet. The massive storm that erupted in the aftermath of the crash — which included earthquakes, tsunamis and wildfires — killed off 80% of the world’s living creatures. Pieces of rock, ash and Earth were thrown into the air, falling as acid rain and blocking out the warmth of the sun. Plants that weren’t wiped out by the extreme weather changes suffocated in the polluted landscape. The only surviving animals were birds, who escaped the worst of the storm by flying away or adapting to survive new ecological niches.

Fortunately for us, the extinction eventually led to the rise of the mammals, and eventually, us. While it spelled the demise of close to 1,000 species of reptilian giants, the die-out paved the way for other animals to take their place.