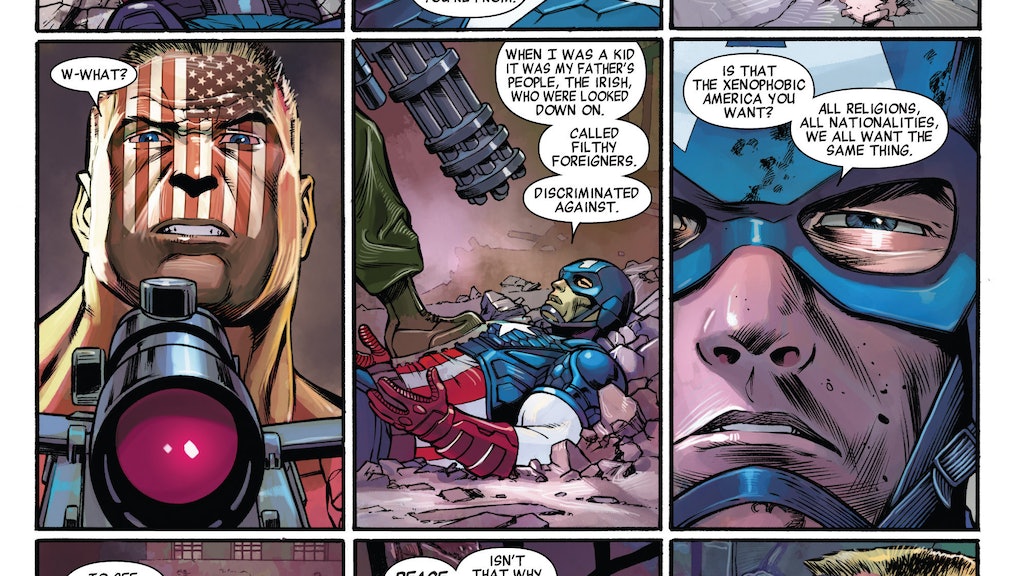 What would iconic superhero Captain America say about America's on-going immigration debate? He'd say the obvious: That we're not treating people coming to this country like human beings.

This short exchange says it all:

The page in question comes from Captain Vol 7 14 (h/t to Imgur user Snowchill).

Why Cap's words matter now: Congress will leave soon for its August recess, potentially leaving the crisis on the border with Mexico completely unresolved. With just hours left until the legislative branch leaves town until Sept. 7, the president's requested $3.7 billion in emergency funding to deal with the crisis of unaccompanied child refugees fleeing to the U.S. from Central America has not been assigned. Obama's legislation is quite likely dead in the water.

A competing House GOP-sponsored bill which funds spending through September may have a rocky road in the Senate. The Republican version has provisions designed to appeal to the anti-immigration crowd, like eliminating hearings for child migrants in order to speed their deportation. While Democrats consider those provisions a poison pill, it is still possible that most conservative opponents of immigration reform will decide the bill doesn't go far enough.

People like Texas Gov. Rick Perry and Fox News' Sean Hannity are busy pandering to the lowest common denominator: Gangs of self-declared border guards who demand the right to take immigration enforcement into their own hands. There are a lot of them — and they have guns.

Across the nation, Republican governors are furious that tens of thousands of immigrant children are being resettled with sponsors in their state without prior notice. In the meantime, the Los Angeles Times reports that some of the children are being rushed into deportation hearings without time to prepare their cases.

The children — mostly from Honduras, El Salvador and Guatemala — are fleeing endemic poverty and pervasive violence from criminal gangs. United Nations officials believe they should be formally recognized as refugees. To put it simply, their situation is very, very bad. A humane response would do what Captain America would — recognize them as children trapped in a terrible situation and who deserve better than a political battle over how quickly it's possible to deport them.