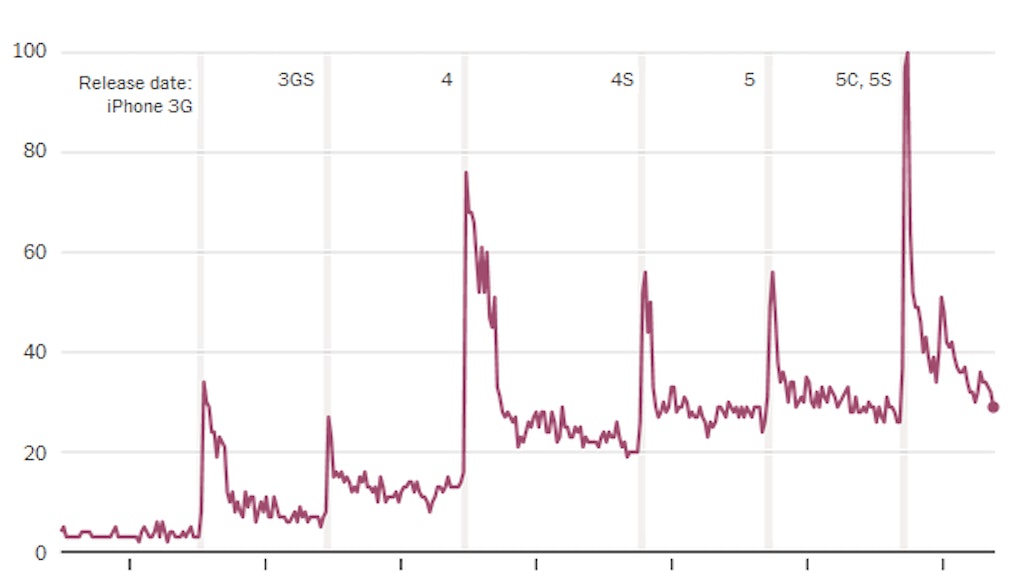 The Real Reason Your Old iPhone Seems to Fail So Quickly

The news: If you have an upgrade coming up and are wondering whether to switch to Apple, the New York Times' Sendhil Mullainathan might have discovered something that could make you think twice. Searches for "iPhone slow" mysteriously tend to coincide with the release of a new Apple mobile device, while a similar trend isn't apparent among Samsung Galaxy devices.

It certainly sounds — and looks — a little suspicious. Take a peak below:

Sketchy, right? There are six striking spikes for "iPhone slow" and each is tied to the release of a faster model. Meanwhile, Galaxy just chugs along. It appears that more people are concerned about the slowness of their Galaxy phone, but this probably lines up with growing Android market share. Apple's chart definitely looks like planned obsolescence, with previous iPhones mysteriously underperforming as soon as its reigning CEO was ready to gobble up more of its users' money.

Mullainathan is quick to remind readers that the measurements aren't actually of phones getting functionally slower, but rather users perceiving their device not being able to keep up, which opens the door to alternate theories. It could be, for example, that iPhone owners are getting excited about the release of a better model and indulging in other-side-of-the-fence fantasizing. But there's no similar trend for Samsung users and product announcements don't see similar spikes.

Here's where Mullainathan loses me. He calls the crowd saying this is evidence of planned obsolescence "conspiracy theorists" and settles on a "benign" explanation — each Apple release comes with a new OS optimized for the new iPhone.

Since 90% of Apple users are on the latest version of the device, and just 18% of Samsung users are, Mullainathan concludes this could very well just be a perceptual problem caused by iPhone users upgrading their OS without thinking.

The problem? That's exactly the point. It's basically impossible for most casual users to roll back iPhone updates, which Apple advertises very enthusiastically. iPhone 4 owners complained that iOS 7, for example, made their older devices practically unusable — just four years after it came out. (It wasn't the first time this happened.) They've also pointed to quickly-failing batteries that can only be replaced at Apple, which costs around $85. The batteries were rumored to run down faster after iOS upgrades. And the 5C was just a little more, suggesting that they were unsubtly pushing the upgrades.

Sure, Apple doesn't force people to upgrade their devices and Android phones definitely have similar but less-well-documented problems. Phones also become slower partially due to wear and tear. But did Apple knowingly let lots of users break their phones without warning them? Yeah. Did it care very much when they did? Not at all. Even the company's defenders wondered why users weren't allowed to downgrade.

Whether or not this is planned obsolesence or purely unintentional doesn't matter much, because both work to Apple's advantage. But even if it is a deliberate ploy, it's way less evil than dodging corporate taxes or happily exploiting Chinese labor until someone notices. It's just kind of annoying and you were probably going to upgrade soon anyhow.