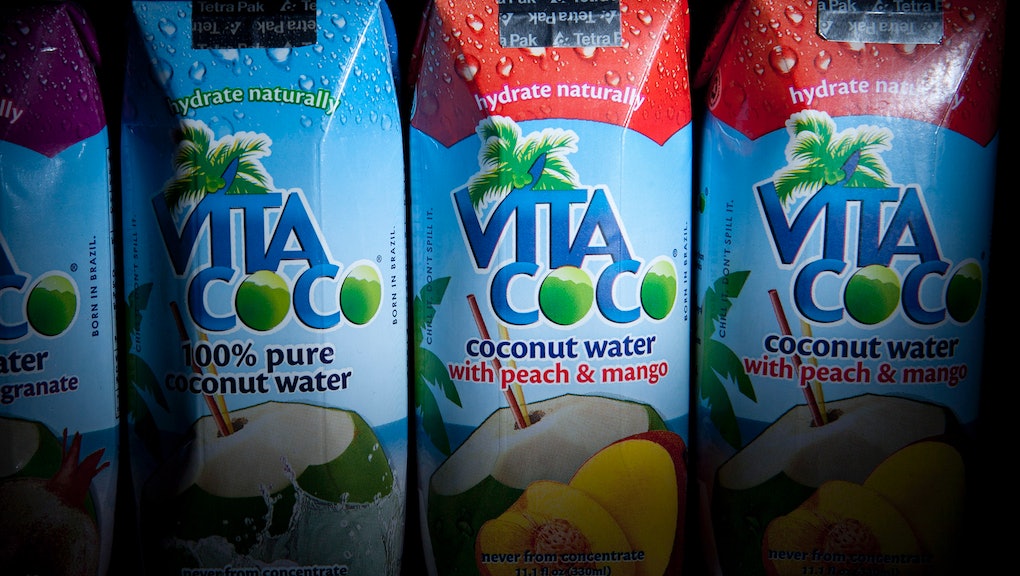 The news: Put down the $4 carton. Coconut water is no better at helping your body rehydrate than plain old water.

Although it comes in an adorable package (is it a box or a bottle?) and tastes delicious (to some), the salty-sweet beverage's claims to recharge your body with the nutrients it needs are false.

As it turns out, coconut water does no better a job at replenishing your body post-workout than tap.

Like all plant-based foods, the drink contains a mix of minerals and vitamins important for maintaining healthy skin and bones. And, similar to sports drinks like Gatorade, coconut water includes sodium and potassium, the electrolytes you've been told to guzzle whenever you're sick. But you don't need to knock back those ingredients every time you go for a run — normal tap water rehydrates just fine. Want a little potassium boost for sore muscles? Grab a banana.

The background: Scientists who first started investigating coconut water's health claims back in 2002 found that people who consumed coconut water after a workout were more likely to drink more of it, but weren't any more hydrated as a result than those who consumed water or a sports drink.

In 2012, top-selling coconut water brand Vita Coco funded another study of its pricey product. Researchers who compared the benefits of hydrating with either water, a sports drink or coconut water after a workout found, similarly, that water did the job just as well.

As food writer Michael Moss over at the New York Times noted, other companies have been sued for making exaggerated health claims about coconut water's benefits and had to remove them from its packaging.

Why it matters: Since taking off globally in the mid-2000s, the coconut water business has mushroomed into a $400 million dollar industry dominated by just three giant companies. Accordingly, rumors of the not-quite-juice's health claims have blossomed from assertions that the drink helps with post-workout hydration to boasts that the beverage can cure cancer.

Thankfully, there aren't any real negative effects associated with drinking coconut water (aside from a potential bit of post-yoga smugness). But the stuff is expensive, and its health claims are deceptive.

Next time you're debating between buying a blue carton and refilling a glass from the tap, be confident in choosing the only option that's free.