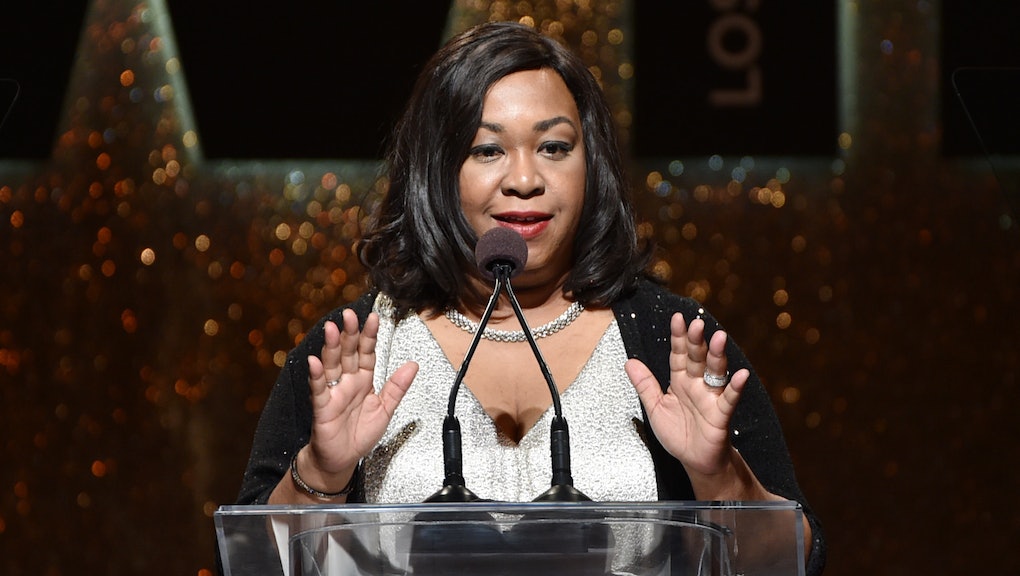 Shonda Rhimes is one of the most successful screenwriter/director/producers working in the television business. She's also a woman.

Her impressive resume includes creating Grey's Anatomy, Private Practice and the wildly popular Scandal, and this fall she's bringing a new show, How to Get Away With Murder, to the airwaves. So what can all of us women working in male-dominated work forces learn from Rhimes about success and how to achieve it? Quite a lot. Hers is an outlook that all women (and all people) could stand to adopt. We gathered up just 13 of the many excellent Rhimes quotes that sum up how she made it happen, and hopefully through these we can glean how we can too. Go forth and conquer.

"You want to be a writer? A writer is someone who writes every day, so start writing. You don't have a job? Get one. Any job. Don't sit at home waiting for the magical opportunity. Who are you? Prince William? No. Get a job. Go to work. Do something until you can do something else." -Dartmouth commencement speech

Aim high. And then never stop reaching. Joking or not (and we sort of suspect not), Rhimes realized the power of the repeated affirmation of her future media domination. And she believed it. Good thing she didn't tell everyone that her plan was to dominate the world of 9 to 5 office drudgery.

3. Your gender and race don't define you.

4. It's never too early to start kicking ass.

“I was 4 and dictating stories into a tape recorder, and my mom typed them up.” - 2013 Fortune magazine interview

Rhimes told Fortune that her writing career began at just 4 years old, when her mother would help her translate her fledgling ideas onto the page. Which brings us to another point: Mothers (and fathers!), encourage your daughters (and all your children) to be anything they want to be. If you weren't encouraged as a child, encourage yourself. Start today.

5. Sometimes, you have to do things for yourself.

“What was great for me about ‘Scandal’ was I had earned a lot of political capital with the network. I had done ‘Grey’s,’ I had done ‘Private Practice.’ What were they going to do, fire me? I wasn’t worried about what anyone else thought. This one was for me.” - New York Times profile

Women tend to be people-pleasers, worried about making sure everyone is happy. To that, we must learn to say screw it. Sure, sometimes you have to play the game and, in business as in life, sometimes it is about sacrificing your own desires and swallowing your pride for a greater good. But then, other times, it's about doing exactly what you want and focusing on what makes you happy. Life is about balance, and that holds true for any career.

"A hashtag does not make you Dr. King. A hashtag does not change anything. It's a hashtag. It's you, sitting on your butt, typing on your computer and then going back to binge-watching your favorite show. I do it all the time. For me, it's Game of Thrones. Volunteer some hours. Focus on something outside yourself. Devote a slice of your energies towards making the world suck less every week.” - Dartmouth commencement speech

There are a lot of "hashtag activists" out there who are likely taking umbrage with this quote. And, sure, a hashtag campaign can open up a great conversation. But that's all it is — a conversation. You can talk about the change you want to see in the world, or in yourself, but until you be that change, it's just a whole lot of chatter.

In online journalism, there's a saying: "Don't read the comments." The same holds true for many actors and musicians, who try not to pay attention to reviews and critics, lest they find themselves mired in all the negativity. No matter how much success you've achieved, there will always be detractors (often even more the farther along you get into your career) and, hey, sometimes you're going to mess up. It's best not to dwell on it, it won't get you anywhere good.

8. Don't be afraid of your dark side.

“I think that shadowy life, that completely secret life, the duality of that existence is interesting." — On her interest in telling the story from a mistress' point of view in a 2013 Salon interview

Contrary to what the patriarchy would have women believe, ladies don't have to be all sweetness and light all the time. Sometimes it pays to get a little dark. Moreover, Rhimes understands that by being in touch with some of her "dark and twisty" inclinations (to quote Meredith Grey) you reveal some important things about yourself you might not know especially if you're too busy trying to be nice and polite all the time. Plus, having a little edge is just a hell of a lot more interesting.

"Most of the women I saw on TV didn't seem like people I actually knew. They felt like ideas of what women are." - 2006 O Magazine interview

Early on in her career, in a conversation between two women who are a far cry from anyone's traditional idea of what two women could be, Rhimes told Oprah why she felt compelled to write strong, multi-faceted female characters for television. It was because, when she turned on the tube, all she saw were caricatures of "women," as sketched out by men. Don't let anyone shape your character but you.

"Cynicism is a choice. Optimism is a better choice." My mantra for the season and for LIFE right now." - Twitter

Rhimes borrowed her current mantra from President Obama (She could do worse!), and she's right in her assertion that it's an important thing to keep in mind in one's career and one's personal life. It's easy to be negative, to mask any fears or insecurities with with a jaded facade. Don't. You'd be surprised how much more you can accomplish when you're willing to let that particular crutch go and think happy thoughts.

“Tomorrow is going to be the worst day ever for you. But don't be an asshole.” -Dartmouth commencement speech

This soundbite from her Dartmouth commencement speech hopefully won't be true of your every tomorrow, but some days it will be true. It bears mentioning because it's Rhimes' way of saying to keep things in perspective. Yes, you might be having a really, really bad day at work. But somewhere, in another corner of the world, another woman is struggling to feed her children. Another is being subjugated, raped or worse. Rhimes went on to say, "Hard is relative. I come from a middle-class family, my parents are academics, I was born after the civil rights movement, I was a toddler during the women's movement, I live in the United States of America, all of which means I'm allowed to own my freedom, my rights, my voice, and my uterus; and I went to Dartmouth and I earned an Ivy League degree."

That she did. Perspective is everything, and it's important to keep yours in balance.

It's great to have role models and wonderful to have people who inspire you, but don't strive to be them. Strive to be you.