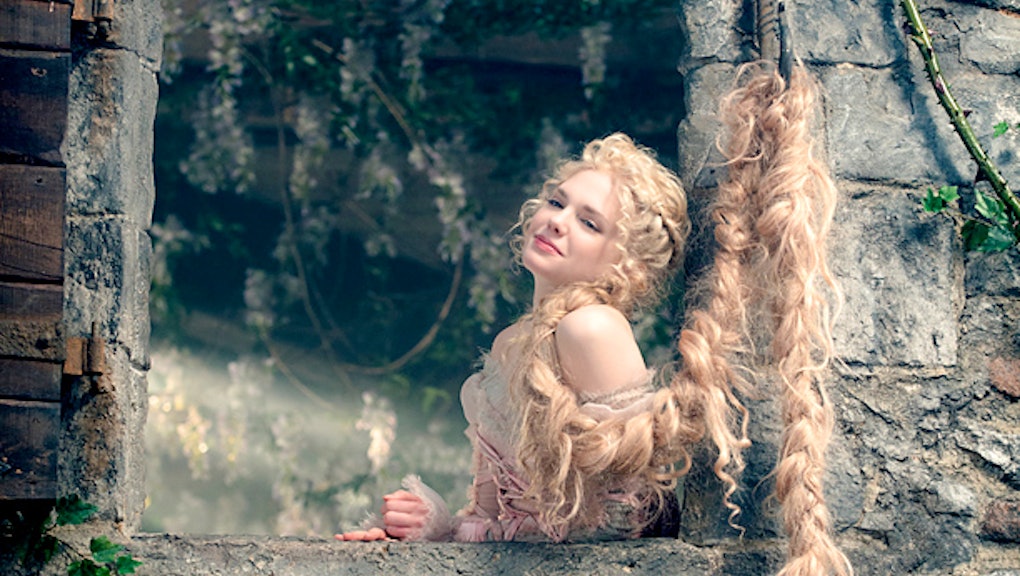 After decades of ubiquity as one of Broadway's (and most high school's) best-loved musicals, Into The Woods is finally reaching cinemas. The best part? The first trailer looks damn good, even though there's not one note of singing.

Into the Woods, first performed on Broadway in 1987, is one of the most famous musicals from the acclaimed Stephen Sondheim. All of its fairytale characters live surrounding the same, mysterious woodland and we follow the story of a baker (James Corden) and his wife (Emily Blunt) trying to reverse a decades-old spell that prevents them from having children. In the process they end up bartering with, and deceiving, the Wicked Witch (Meryl Streep), Cinderella (Anna Kendrick), Little Red Riding Hood (Lilla Crawford), Jack (Daniel Huttlestone) and Rapunzel (Mackenzie Mauzy), among other familiar faces.

Though it's odd that we don't hear any singing and only a few sections of the show's more pattery-lyrics from the 'Prologue' are featured, perhaps they're building intrigue and suspense by keeping the musical numbers under wraps. Already the sweeping orchestral versions of "On the Steps of the Palace" and "Stay With Me" sound fantastic, if slightly at odds with the very intimate, bleak scenes that we see in the trailer. Showing brief glimpses of most of the fairytale tropes and stalwarts who feature in Sondheim's musical, there are signs that a lot of the off-stage action, magic and fantasy will be brought to life on film, including a very angry Giantess (Frances De La Tour) in the second act who we see swiping at the cast.

Sondheim has recently confirmed that Disney will be allowing the film to be as dark, complex and morally ambiguous as the musical. This follows initial fears that it would be neutered in the transfer from Broadway to the big screen. We'll have to wait until Christmas Day, however, to see if it really was worth going into the woods and down the dell to find our happy ever after.