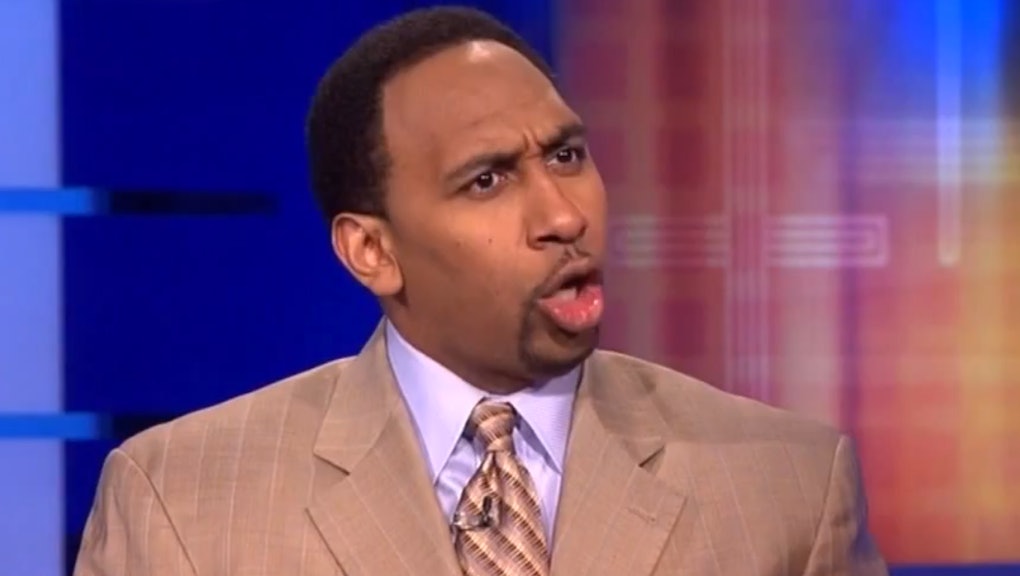 On Friday, Stephen A. Smith ignited a firestorm while discussing Baltimore Ravens running back Ray Rice's two-game suspension for a domestic assault incident. ESPN's resident bloviator ranted on First Take about the responsibility women have to avoid putting themselves in the same situation that Rice's then-fiancée Janay Palmer put herself in.

While Smith may have intended to open a broader conversation about domestic abuse, it was an insensitive and demeaning stroke of victim-blaming that failed miserably — and one that laid bare where ESPN is failing its viewership.

Upon hearing Smith’s comments, ESPN colleague Michelle Beadle responded on Twitter. Meanwhile, there was no immediate response from the network, which somehow managed to repurpose the controversy into a media event, ultimately asking viewers to tune into Monday's episode of First Take for a pre-recorded apology from Smith, which he issued at the top of the show.

ESPN has been known to manufacture stories in order to drive discussion on their own network, a corollary of its mind-numbingly insipid "Embrace Debate" mantra. And while this was (hopefully) not the intent, somehow Smith's comments took the attention away from the real conversation, about Ray Rice and domestic abuse, and became only about the culprit. The entire saga left a bitter taste in many people's mouths.

By now, we've gone through the cycle of outrage towards Smith, praise for Beadle's willingness to speak out and offered our opinions on everything about the situation and Ray Rice's suspension. For ESPN, it’s just another incident that's been swept under the rug. Smith is taking a week off from First Take and will return next Wednesday. And we'll move on.

But it feels important to also address what should have been done, and what the network should do going forward when dealing with sensitive issues of this nature.

According to a media kit released by ESPN, 94% of readership at their website are male, with a median age of 29. Specifically with the NFL, the female audience is the single largest domestic growth market for the league.

Sports media as a whole — and specifically for this discussion, ESPN — needs to accept the responsibility of the platform they have, which reaches millions of viewers across the country. If First Take, or any other show on the network, is where debates about sports and its larger cultural issues should take place, it should include the female perspective as well. If Stephen A. Smith wants to espouse his views on domestic abuse, then why not set up a panel where other media personalities, such as Beadle, can be part of that discussion?

What Smith said on First Take last week would be irresponsible in any context, but the network should at least allow for a more fluid conversation about such a sensitive subject, instead of reducing it to the rambling monologue of one man.

Yes, Beadle has the ample platform of nearly a million followers on Twitter. But when she's left to speak out and defend her point of view on her own social network, it becomes a fractured, flawed conversation. On one side, there's Smith's meandering take. On the other, there’s Beadle's response. And from everywhere comes vitriol from the parts of the Internet that just wants Beadle to shut up already. By denying her a platform to speak and have a conversation with Smith, or anyone else on the network, it puts Beadle or anyone else who wants to defend themselves in a compromising position.

All of this speaks to the larger point of sports media's insensitivity and its tendency to simply view their conversations as something geared towards the male gender only. ESPN in particular has taken steps in some areas, including by introducing espnW, a brand geared toward woman and a space for female stories in sports. But a cordoned-off microsite in ESPN.com's hinterlands is not enough.

It's easy to see how women can feel neglected, ignored and disrespected by how they're discussed and how their perspective is often left out altogether.

It's up to the individual to decide whether Smith, or the entire premise of First Take, is a slap in the face to the intelligence of sports fans who value nuanced arguments based on facts, and not just opinions being thrown out there for the sake of inciting a reaction. But there's no debate, and really no excuse as to why the female perspective should be ignored, whether the discussion is about domestic abuse or anything else the network chooses as a topic.

The entire "analyst causes a stir, gets a slap on the wrist" cycle seems hopelessly shopworn at this point. It's a reactionary approach to more important issues. If we ever want to walk away from one of these incidents feeling like progress has been made, it will require the sports media world to take a more proactive approach, and take the necessary steps to ensure that discussions don't feel so one-sided and that debates can be opened up to everyone, male or female, so that there's an equal platform for all perspectives.

Until then, we'll just be dealing with the same debate and fallout next time someone in the sports media world has a brain cramp.