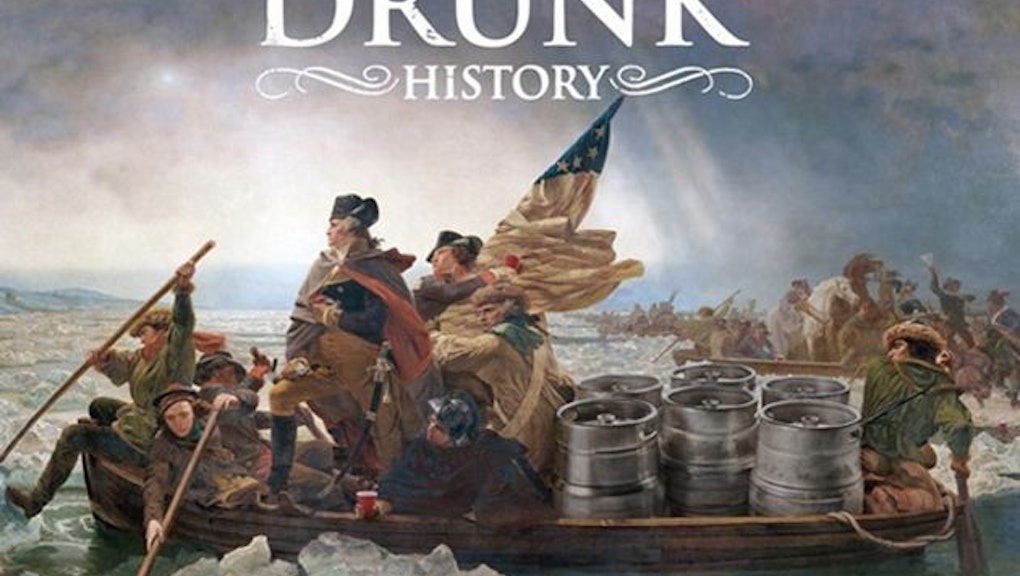 'Drunk History' Is the Incredible Show You Should Be Watching

Let's learn about history. Does that sentence bore you already? You might feel differently with hilarious instructors who are both intelligent and completely wasted.

Did you know about Percy Julian, for example? The man who created steroids? Comedy Central's riotous Drunk History has you covered, teaching comedy lovers about history in the most wonderfully unpretentious way.

YouTube comedy factory Funny or Die created Drunk History as an online series back in 2007, and the original premise carries over to the longer TV episodes. Host Derek Waters finds hilarious, brainy people with a love of history, fills them with booze and asks them to recount historical sagas or events in cultural history. Famous actors then perform sepia-tinged, poorly produced recreations of these moments, reciting the drunken account as dialogue. It may sound sloppy, and often it is, but there's something fundamentally satisfying about watching a booze-filled Abraham Lincoln tell people to shut up.

Well-known comedy performers like Jordan Peele or Aubrey Plaza have largely replaced movie stars like Ryan Gosling and Don Cheadle, but don't be put off by someone other than Will Ferrell and Zooey Deschanel playing Mr. and Mrs. Lincoln. The real reason to watch Drunk History is the drunken monologues, which mix actual history, passionate subjectivity and a narrative style that ignores the passionless, clinical voiceovers of most documentaries. Here narrators rage, laugh and refer to historical icons as "one of America's first pieces of shit" (poet Edgar Allen Poe's rival Rufus Griswold, for those interested).

The show's creators also focus on genuinely informative, exciting and unusual moments in human history. One episode relates the hijacking of Civil War steamship the CSS Planter by slave Robert Smalls, taking the human cargo onboard to safety beyond the Confederate blockade. Another spotlights Claudette Colvin, the first woman to ignore segregated bus seating in Montgomery, Ala., before Rosa Parks, whom the NAACP saw as a more palatable representative for the famous protest. In another, Weird Al Yankovic plays Hitler, which speaks for itself, really.

Perhaps the best part about the show is the way it not only gets a few snide jokes in, but impassioned pleas to remember the lessons history has taught us. A regular contributor to the show, deadpan comedienne Jen Kirkman, recounts the story of George Washington's slave Oney Judge and turns it into an anti-George W. Bush equality rant with incredible, inspiring rage.

This passion carries over into all of the stories, even now in the show's second season. Johnny Knoxville, who appeared as Johnny Cash, wore the late country star's boots, which he bought at an auction, and completely committed to playing the tipsified legend.

Ken Burns, Simon Schama and the other stern historians of TV documentaries have had their time. Drunk History mocks the low-budget historical reenactments and glum narration we've endured for years, and proves to both TV networks and viewers alike that facts do not have to be boring.