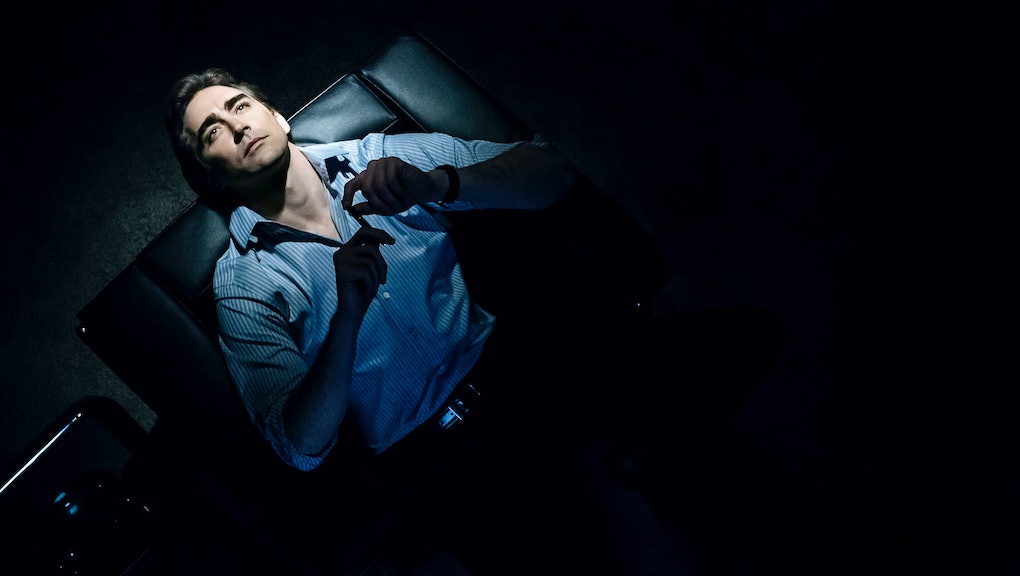 This Is the Most Sexually Interesting Character on Television Right Now

Television today is reflective of society's ever-growing acceptance of sexuality in all its many beautiful forms. But no series depicts sexuality better and with more honesty than AMC's summer sleeper Halt and Catch Fire and its lead character, Joe MacMillan.

Lee Pace plays Joe, an ex-IBM sales executive in 1983, during the personal computer revolution, who brings his talents to Cardiff Electric, a smaller software company trying to compete with IBM. Joe is a brilliant salesman who delivers Don Draper-worthy monologues about technology, but it his sexuality which makes him one of the most intriguing components of this freshman series.

Sexual fluidity is usually a tired TV trope that rears its head in a show's later seasons, when all other plot lines have been exhausted. Willow from Buffy the Vampire Slayer, Marissa from The O.C. or Ally and Ling's kiss on Ally McBeal all spring to mind. Usually when a character acts on bisexual tendencies or same-sex attraction later in a series' run, the reveal is treated with shock and, to a point, a sense of betrayal from the other characters. This makes Halt and Catch Fire even more groundbreaking: We know Joe is bisexual within the first few episodes of the series, and his sexploits directly affect the plot of the show.

In the pilot episode of Halt and Catch Fire, we meet Cameron, a young, brilliant computer programmer played by Mackenzie Davis. She and Joe begin a heterosexual relationship. Two episodes later, Joe hooks up with a man to avoid a potentially disastrous investor deal. His bisexual affairs deepen as the season progresses, and while the characters on the show are mature and open about sexual desires, the show's time period makes things even more complicated.

Earlier this year, HBO's adaptation of The Normal Heart depicted the early days of the AIDS epidemic as it hit the gay community in the 1980s. Halt and Catch Fire also deals with sex during that time period, but it handles AIDS in a much more understated way. Simon, a former lover of Joe's, resurfaces when Joe calls on him to help design Cardiff's new computer. Unlike The Normal Heart, which shows the agony of AIDS through screaming and tears, Halt and Catch Fire portrays it simply and sadly when, towards the end of the episode, Simon quietly tells Joe, "I'm sick."

Joe knows what that's code for, and as they embrace for a final goodbye, Cameron, spying them from afar, believes the two are reigniting their affair. She tries to storm off before Joe chases her down to explain. This imaginary love triangle between two men and a woman feels the effects of the disease that shut down much of the sexual freedom that broke out in previous decades.

When it comes to AIDS, Halt and Catch Fire's portrayal of Joe defies what was happening in the television landscape of the period. Onscreen sexual attraction beyond the heterosexual wasn't common in the 1970s and '80s, and bisexuality was even less widely discussed than homosexuality. AIDS activism mostly operated on a smaller scale, largely within affected communities. One notable exception came in the early '80s, when the writers of Dynasty transitioned the character Steven Carrington from gay to bisexual, since gay men were directly associated with the disease at the time. The creators of Halt and Catch Fire show history from a different viewpoint, not only with regards to technology and computers, but in a frightening time for men who had sex with other men.

If Joe is not straight, his attraction to Cameron makes more sense with further analysis of the character. Cameron's short blond hair, unisex name, runaway teen wardrobe and rebellious attitude could easily have been given to a young man in the script. Aside from some references to being a woman a male-dominated field like computer programming, her gender almost doesn't matter, to the writers or to Joe. Gender is an afterthought for Joe all around, whether it's in creating a personality for a computer or going to bed with someone. Character interests him more.

The depiction of Joe's bisexuality on Halt and Catch Fire is groundbreaking in its realism, but since a second season has yet to be ordered, it may be a short-lived victory. Still  AMC has proved that the ability to bed-hop from gender to gender is no longer a television taboo. Portraying a fully formed, complex bisexual, and not just as an unbelievable last resort, makes for good TV and important TV. Hopefully other series will catch on and follow suit.