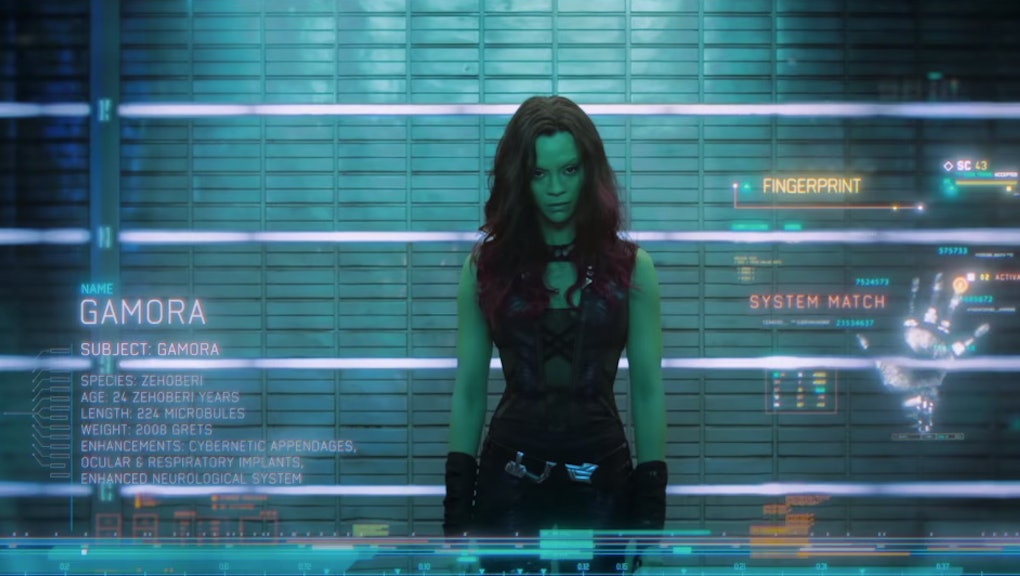 This post contains spoilers for Guardians of the Galaxy.

Guardians of the Galaxy, released today, is a good movie and a great summer blockbuster. It's at times silly, exciting and heartfelt.

With its slinky, green-skinned leading lady Gamora (Zoe Saldana), it also makes desperately obvious the need for a female-driven superhero films. (For reference, the last comic movie anchored by a female lead was Elektra in 2005; a Wonder Woman movie has been batted around, without coming to fruition, for decades.)

The movie's star is Peter Quill (a.k.a. Star-Lord), an Andy Dwyer-cum-Iron Man hero who is on the run after stealing a powerful orb. The titular Guardians consist of a group of rag-tag extraterrestrials made up of Quill; Gamora, an assassin; Drax (Dave Bautista), a beefy widower hell-bent on revenge for the deaths of his wife and child; Groot (Vin Diesel), a humanoid tree; and Rocket (Bradley Cooper), a talking raccoon.

To better understand why and how Gamora matters, we need to consider the first two women we meet in the movie. The first is Quill's mother, who is dying of what appears to be cancer. Likely distraught at both her visage and the idea of losing her, a young Quill can't bring himself to hold her hand as she dies — a refusal that haunts him for years to come.

The second is one of our hero's recent sexual conquests — so recent, in fact, that she's still sleeping in his spaceship when he frantically tries to make his first getaway after stealing the aforementioned orb from an abandoned planet. In all his heroic machismo, Quill literally forgets she's still there.

The moment may elicit some laughs, but the presence of a disposable woman cliché so early in the film also dims some hope about the gender dynamics of this alien world; as New York Times critic Mahnola Dargis writes, it sets us up to believe "that however futuristic the movie may be, its sexual politics and worldview are antediluvian."

Gamora challenges that, for the most part. She's fierce, ruthless and one of the most skilled fighters on screen. She's not just a strong female character for the sake of having a strong female character, either. As the adopted daughter of perhaps the most evil being in the galaxy, and a newly-minted good(ish) girl, she comes to the Guardians with her own complicated back-story and motivations. She plays an important role in the trajectory of the story, too; there's no Trinity Syndrome here, a phrase coined by the Dissolve's Tasha Robinson to describe the recent phenomenon of strong female protagonists in films that have nothing meaningful to do.

Gamora is also attractive, as the film is quick to remind us through her variety of skin-tight leather suits and miniskirts. The camera lingers on her behind at convenient moments, too, like when she's climbing a ladder, or making sure her weapon is secure.

None of this is accidental. Saldana copped to the movie's male gaze in interviews, saying that it was important to both her and the filmmakers that Gamora be pretty, so that the movie would "get the teenage boy vote." Of course, it's not a character flaw that Gamora looks good. It would be nice if actresses weren't so often sexualized solely for the sake of selling tickets, but beauty doesn't prohibit someone from kicking ass.

Where the film arguably missteps, however, is in it's unwillingness to let Gamora do just that. As the only woman in our band of heroes, Gamora plays not only the strong female protagonist, but also the damsel in distress.

Though she quickly establishes herself as physically and mentally capable, Quill still comes to Gamora's rescue — twice. (What is a male hero, after all, without a woman to save?)

He rescues her while the gang is in prison and Drax, unaware of her reformed ways, tries to kill her. Gamora has already fought off nearly the entirety of the (male) crew surrounding her by the time Quill gets there, but it's only through his quick thinking that she's spared.

Later, she gets stranded in space and is quickly freezing to death. Quill jumps out of his own spaceship and, proving chivalry is alive even in the far corners of the universe, risks his own life by placing his high-tech battle helmet (which apparently doubles as an oxygen mask) on her face until rescue comes in the form of another ship.

These roles arguably flip at the end of the film, when Gamora helps save Quill by holding out her hand to him. Then again, Quill envisions her as his dead mother at this precise moment, turning the act into a metaphor for his redemption — he overcomes his fear, he finally reaches for her hand — rather than a feat of heroism in its own right.

When Pacific Rim came out in 2013, one Tumblr user proposed a "Mako Mori Test," inspired by Bechdel's well-known criteria but taking cues from that film's truly bad-ass female lead (and basically only female character). A film passes the Mako Mori test if it has "a) at least one female character; b) who gets her own narrative arc; c) that is not about supporting a man's story."

Gamora comes pretty darn close to passing, but, especially with her deferential attitude towards Quill by the end of the film, ultimately is relegated to side-kick and potential-love-interest status.

To be clear, none of this makes Gamora weak, or the movie itself bad. What this does is emphasize the desperate need for a comic movie centered around a female star. Not because Guardians of the Galaxy isn't delightful, and not because we shouldn't have any films in which men get to be heroes and women get to be saved. It's because those clearly are, by and large, still the only stories we're telling.

Even though this year's Comic Con had a record 12 panels devoted to women, women make up nearly half of comic fans and more than half of movie goers, and women prefer female superheroes to male ones, comic giants like Marvel and DC have been notoriously hesitant to release films centered on female superheroes. Instead of Wonder Woman, we get yet another iteration of Batman or Spider Man. Instead of Black Widow, we get a third Captain America. And, though the introduction of a female Thor and African American Captain America are shaking up the written comic world, Marvel Studios President Kevin Feige has said that we shouldn't expect to see these changes on film any time soon.

This is a shame. Acclaimed comic author Brian Michael Bendis recently told New York Magazine that "the point of superheroes [is] to be the best version of yourself," and that there should be "more of a connection between why people read these stories, and how they act."

Watching Gamora should make us wish for more heroine-lead comic movies, precisely because she's such a great character. We deserve more of her, and more like her, because girls deserve to grow up watching women be the heroes of their own stories, too.