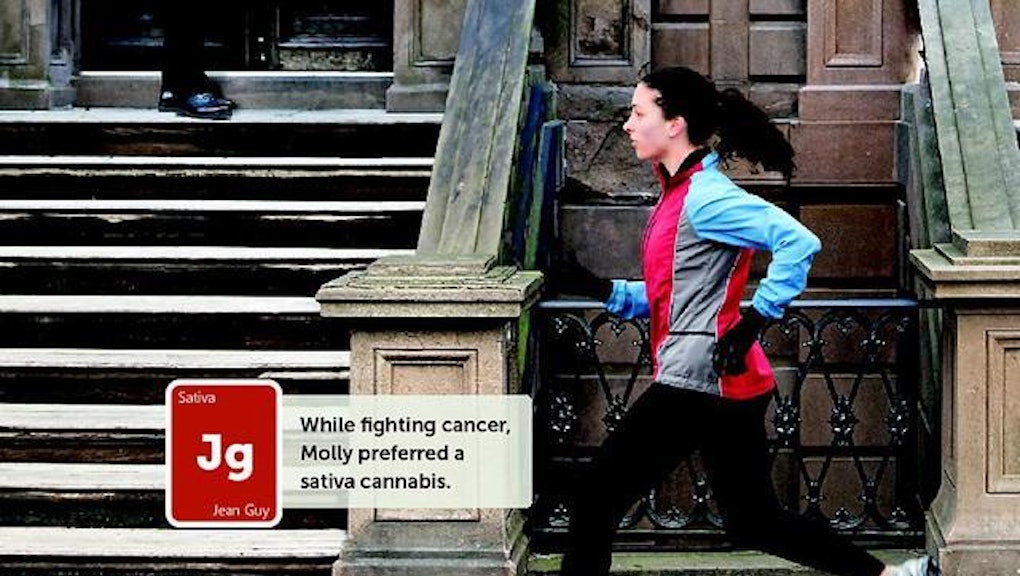 The news: The New York Times is going to feature a cutting-edge page in Sunday's print edition. And no, it's not an article; it's a full-page ad from the "Yelp for weed" company Leafly.

The company's website and mobile app allows users to review cannabis strains within the states where marijuana is legal for recreational or medical purposes. Similar to Yelp, it also lists contact information, menus, and addresses of dispensaries. And their New York Times ad marks the first time that the paper has ever run one from a marijuana-associated company.

The ad is timely. It comes as New York became the 23rd state to legalize medical marijuana and shortly after the paper's ringing endorsement of marijuana legalization across the nation.

The advertisement plays off of a 1980s "Just Say No" anti-drug campaign, by featuring the tagline "Just Say Know," and congratulates the state for their marijuana legalization step.

The full-page ad portrays two city dwellers outside of a brownstone who opt for varying strains of medical marijuana. Molly combats side effects of her cancer with her sativa, while Ian likes an indica strain to help with his MS. The captions are about the company's strong-suit: helping cannabis users find the most appropriate strain to fit their personal needs.

Interestingly enough, the word marijuana is no where to be found in the ad. Leafly instead went with a broad approach to appeal to a larger audience. "Our advertisement in the New York Times is a responsible, mainstream message that elevates the conversation about cannabis in the U.S.," Leafly CEO Brendan Kennedy said in a press release.

A major win: Leafly's ad is a triumph for marijuana enthusiasts and demonstrates in general societal approval of legalization and medical (and even possibly recreational) marijuana use.

Fifty-two percent of Americans support legalization. And with 75% of U.S. states undermining the federal ban by legalizing marijuana outright, like Washington and Colorado, or by decriminalizing it or by permitting medical use, the Times ad helps prove how mainstream supporting marijuana has become. Toke up Grey Lady.